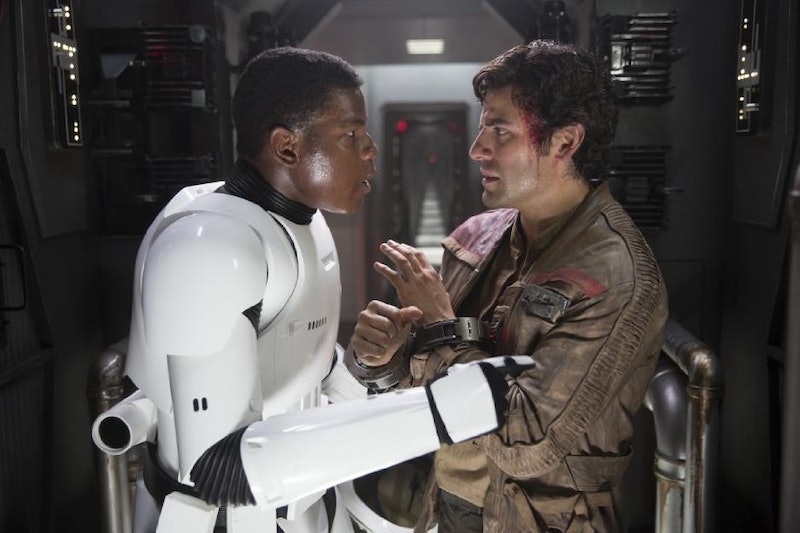 Here's how you know it's real: New York Magazine's The Cut has declared Oscar Isaac, who plays Poe Dameron in The Force Awakens , "The Internet's Boyfriend." If the World Wide Web had existed when the original Star Wars trilogy came out in the '70s, Harrison Ford might have once earned the title, too. The dashing Star Wars heroes have captured the affections of fans across the years, and their popular appeal isn't the only thing they share. Separated by 30 years and a whole canon of Star Wars knowledge, Poe Dameron and Han Solo still have a lot in common.

Both have earned reputations as enormous assets to their respective resistance movements, through their loyalty to the cause and skill at the helm of a star ship. Even without the assistance of the Force, they handily take down the enemy. And both have relatively mysterious origin stories, especially in comparison to the fully fleshed-out history of the Skywalker clan.

But Poe Dameron is more like Han Solo 2.0 — an updated, more genial version of the original Star Wars scoundrel. Where Han was, to be frank, often pretty condescending, Poe seems like a great dude — just think of when he tells Finn to keep his flight jacket when they're reunited in The Force Awakens. He's friendly and approachable. And (spoiler alert) with Han Solo's likely departure, Episode VIII just opened up a spot for its resident charismatic rogue. Who better than Oscar Isaac's rakish Poe to fill the void? He's just mysterious enough, just ambiguous enough to allow viewers to construct their own fantasies about his story. (After all, isn't that what the FinnPoe ship is all about?) As Sulagna Misra wrote for The Cut, "J.J. Abrams is not dictating to us how to love Poe Dameron; we get to set the terms ourselves." Many similarities unite Poe and Han, but even more exciting are all the ways that Poe improves on the Han Solo model from the original trilogy.