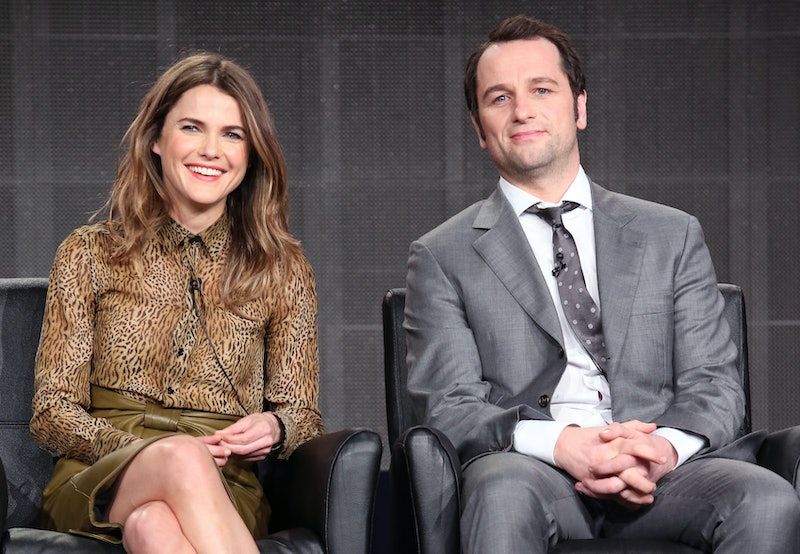 Well, here is some huge news for fans of FX's The Americans. Life just might be imitating art, because according to Us Weekly, Keri Russell and Matthew Rhys are expecting their first child. Bustle has reached out to both Russell and Rhys' reps for comment, but did not receive a response at the time of request. Per an Us Weekly source who is "close" to Russell, the former Felicity actor is "more than four months along." As for Rhys, an insider who claims to be tight with the actor told Us, "It’s so exciting for them!"

Russell is already a mom of two to eight-year-old son River and three-year-old daughter Willow. Both of her children are from a previous relationship with her now ex-husband Shane Deary. If the pregnancy news is true, it's no surprise that the two have yet to comment. I mean, neither Russell or Rhys have officially commented on if they truly are dating or not. Although, as Us points out, they attended an event at the Public Theater in New York Cit together in April 2014.

That said, People asked Rhys about the dating rumor in February 2014 to which he replied, "That is the best one [rumor] I love." He then added about talking with his mom about possibly dating Russell, "I've told her a million times that there are a million inaccuracies that she's read, [but she still] calls and goes, 'Is this true?' I tell her, 'No! When are you going to get it?'"

If the baby rumors are true, then let's send both Russell and Rhys a big "congrats!"