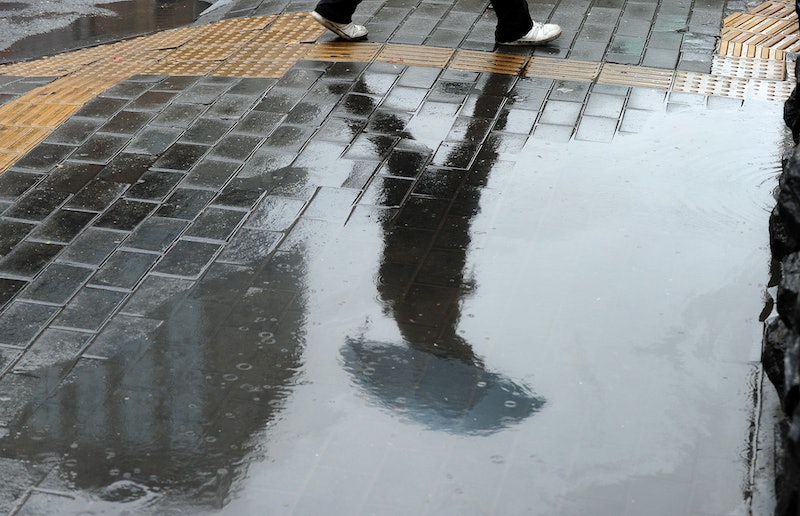 Periscope has been around for less than a year and already its live footage from all over the globe has made us feel more connected. The app has taken us behind the scenes on television shows and to exotic countries. It's also turned fairly mundane tasks into a global spectator sport. On Wednesday, thousands tuned into #DrummondPuddleWatch. What exactly were the masses watching? Why, footage from Newcastle, England, marketing firm Drummond Central, who had nothing better to do on a cold, wet day than broadcast people's attempts at crossing a massive puddle.

Visualized information on viewership of #DrummondPuddleWatch from Twitter Data shows an almost infectious spread of watchers across the globe. The over six hours of streaming footage began to gain viewership at a rapid pace around 10 a.m. EST. Despite the over 19,000 viewers, Drummond Central appears to have seen a slow, small gain in their amount of followers. It's unclear what motivated the social media and marketing agency. They're certainly curious about their viewers, however. Drummond Central tweeted out a poll asking how folks would approach the giant puddle separating the path of what appears to be a park from the street and sidewalk mere feet away. (An overconfident majority voted to "Jesus walk" right through.)

Many other puddle-jumping methods have emerged far outside the conventional jumping, splashing, and going around strategies you'd expect. One man brought his surfboard and cruised his way to #DrummondPuddleWatch infamy while another gentleman grabbed a pool float and hopped to it. No matter their approach, the puddle proved captivating. You can replay the epic Periscope and relive all the glorious moments of humans navigating some unexpected water. Thanks to an enterprising individual with an empty water bottle, you can also grab some Drummond puddle water for yourself.

eBay seller polkadotqueen07 is selling a full 600 milliliter bottle of the good stuff. "Own your piece of the worlds most famous puddle. Extremely rare. You cannot drink this water. It's for decorative purposes only. It would look beautiful displayed in on your mantelpiece," the seller advertises. The starting bid of just under one British pound has quickly ballooned to £65,900. That's around £110 per milliliter of Drummond puddle water. For those looking to pay in U.S. dollars, you'll be shocked to hear that £65,900 converts to just over $96,000. Photos in the eBay listing include the murky puddle water as well as perhaps the most defining moment of #DrummondPuddleWatch — a man totally immersing himself in the water after falling in.

Given the success of the Periscope, this hopefully won't be the last #DrummondPuddleWatch. More puddle water could hit the web as well. The world is certainly thirsty for it.