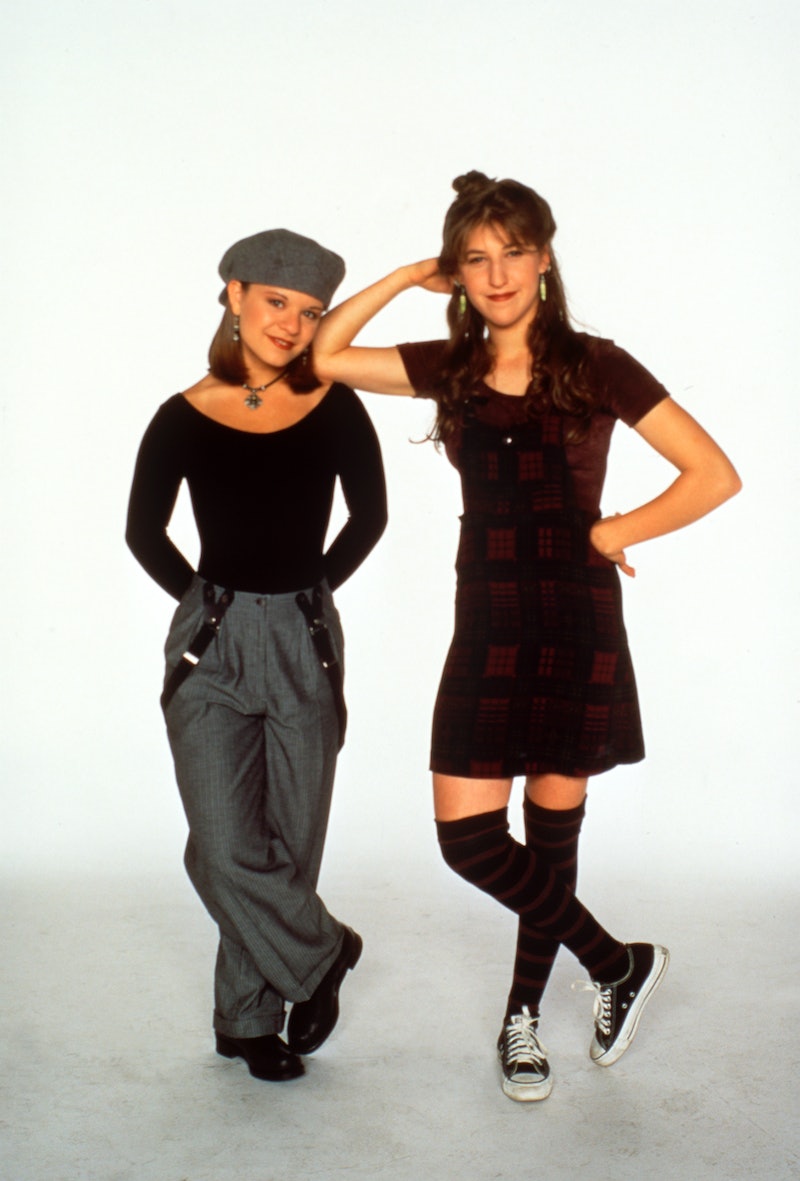 If I'm being totally honest, my outfits haven't strayed much beyond the '90s. It is my staunch opinion that the '90s is a timeless decade for fashion. If you were to take a stroll down memory lane, you would see one of the biggest style icons of '90s fashion is Blossom. Yes, Blossom Russo's '90s outfits were something that pretty much everyone growing up in the decade coveted — and it wasn't just about flowery hats and sundresses. Between Blossom and her bestie, Six, I'm still trying to recreate all their amazing outfits two decades later.

In honor of Blossom's anniversary, it only seems right to honor some of my favorite '90s outfits worn by Blossom Russo, if only to keep my dream of everyone dressing in '90s garb alive. The '90s were a decade where combat boots, vests, and hats went with everything. It was a decade when everyone had a least one bad-ass rocker outfit they wore when they snuck out of the house after curfew... or, at least, that's what the sitcoms led us to believe. While the time when Hillary Banks, Kelly Bundy, Blossom, and Six wore outfits we wished our parents would buy us may be in the past, at least they live on through afternoon reruns on TVLand.

Here are the most definitively '90s fashion moments in Blossom.

Nothing says the '90s like a baggy white tee and a baggy corduroy vest. If I flipped through my junior high yearbook, I would probably find that 75 percent of the girls were rocking this look.

While most girls my age were asking for ponies for their birthday, I was asking for knee pads. It was as if everyone dancing in the '90s had a sweet pair of knee pads even if they never touched the ground. This outfit screams everything I ever wanted to be when I was 10 years old.

3. A Sharing of Hats

This defining '90s moment in which Blossom met the Fresh Prince of Bel-Air only gets better when he hands over his excellent hat.

Ah yes, the ole tank top over the T-shirt look. It seems like only yesterday that I was doing this reverse layering thing. This look may not make sense, but it certainly added to the delightful "anything goes" attitude of the '90s.

I owned my fair share of sweaters that looked like doilies and, since I wasn't as coordinated as Blossom, they could have been considered disposable sweaters that had to be thrown out after one wear.

May we never forget the days when long, crushed velvet dresses reigned supreme.

Back when I realized Cross Colours would last forever, this multi-colored, leather hat was a fashion piece that basically everyone with braids owned in some variety.

8. Cowboy Boots & All The Patterns

Welcome to the '90s, wear you can literally wear all the patterns at once and still be adorable AF.

There was a time when you didn't have to worry that your top was more of a tangerine and your pants more of a fiery orange. Of course, tying your many shades of orange in with a funky, slightly matching hat is what makes the outfit perfect.

The more pins, the better.

This outfit has everything the '90s had to offer: flowery sundresses, oversized vests, big hats, and wait...is that a slip? Yes. The perfect '90s outfit that can still be pulled off today.