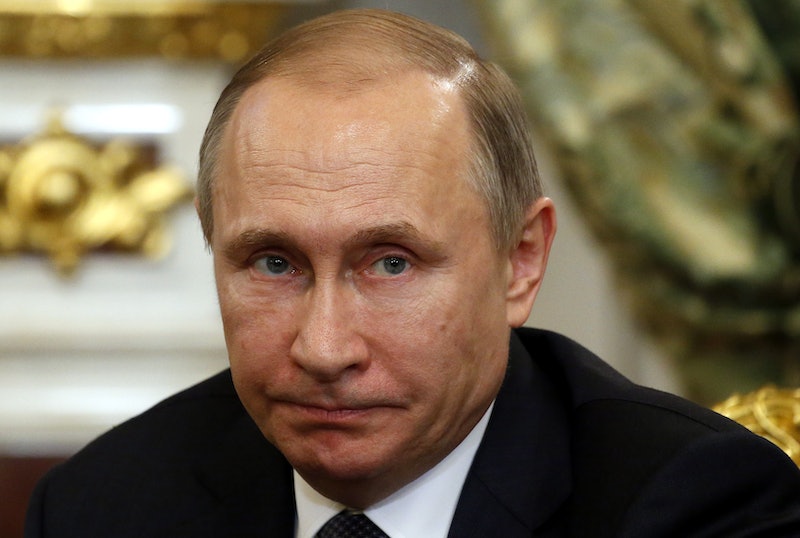 Does your New Year's resolution have anything at all to do with time management or getting organized? If so, and you happen to be in the market for a fresh new calendar to kick off 2016, look no further than Russian President Vladimir Putin's calendar. The calendar has raised so much fervor that Twitter users are casting their votes for the best sexy Putin image. (Spoiler: It's March.)

Released at the end of December, Putin's calendar is exactly what you'd expect: 12 months, each featuring a different glamour shot of Putin. There's outdoorsy Putin, where he's shirtless and fishing. There's also caring Putin, whose arms are outstretched as he prepares to give a smiling woman a big hug. The best part? The calendar seems to come without an ounce of irony, probably because it doesn't need any to be successful. Putin's public approval ratings are consistently high — around 80 percent, according to CNN, and the calendar has flown off of shelves.

The calendar almost begs the question of how we'd react in the United States if one of our political leaders was featured in calendar form. It also begs the question, at least to several Twitter users, of which Putin is the best Putin. (For the record, this is not a scientific analysis — and Putin with a puppy gets my vote.)

Also known on Twitter as "hipster Putin," the March photo shows the most powerful man in Russia holding a wildflower to his face and gazing intently into space, as if he's about to recite a love poem. I'd also like to think that he could be reenacting his own version of The Bachelor, carefully contemplating which of his staff members will receive a rose from him in March. Maybe Chris Harrison will invite Putin to next week's episode of Bachelor Live. March Putin is the clear winner on Twitter, and all other Putins are just playing for a several-way tie for second.

The calendar's July page shows how Putin probably enjoys spending his summers in Russia. He is pictured standing in a body of water, without a shirt on, fishing. This photo will probably remind true Putin fans of the shirtless horseback-riding photo of him that has previously gone viral.

He tends to throw shade at the West, but November Putin is nothing but cuddles and warm hugs for a fluffy puppy. According to CNN, the caption on this page of the calendar reads, "Dogs and I have very warm feelings for one another." What more is there to say, really?

Something about this photo just screams Russia. Maybe it's the fur cap, maybe it's the snow, or maybe it's February Putin. Not only does this photo speak to Russia's natural landscape and environment, but it shows off Putin's ability to interact with animals, much like November Putin.

No matter which Putin is your favorite, you'll be hard-pressed to find one of the calendars to admire for yourself. The Russian newspaper that published the calendar has been selling it for the equivalent of $1, but most — if not all — of the 200,000 copies are gone. In fact, you can now find the calendars on eBay, but be prepared to pay significantly more than a dollar.