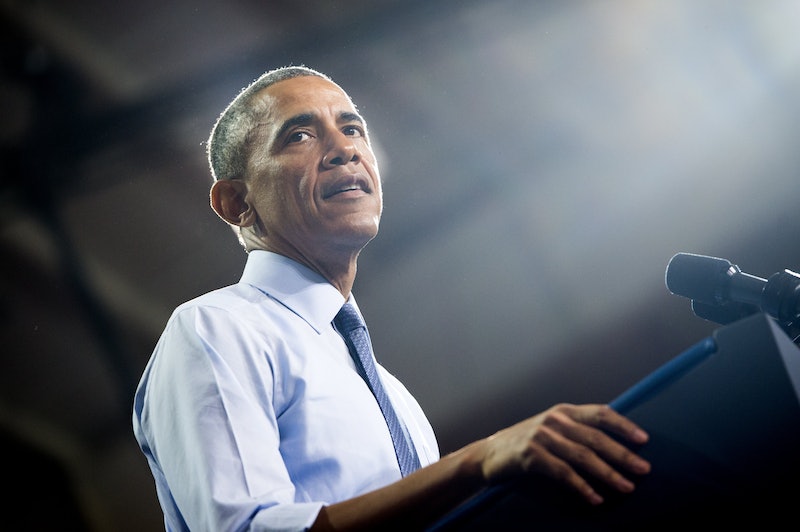 President Obama is gearing up Americans for his eighth — yes, eighth — State of the Union address. And, as per usual, the prez is doing a darned good job of getting everyone stoked about what's planned for the Jan. 12 event. But with the full understanding that this is Obama's last year in office, does this really also mean this is Obama's last State Of The Union address as well?

You bet. But the fact that Obama is going home soon (to another home, that is) has got the head of state going big for this year's SOTU. I mean, how could he not?

In a classy trailer for the Tuesday evening address, the president made clear that this year's speech would be about the bigger picture for America's future. Instead of going through a wish list of legislative agenda items, which plenty of earlier SOTU addresses have entailed, this SOTU will likely focus on larger issues that the president aims to tackle during his remaining time in office and beyond aka the "now or never" stuff.

Obama also appears to be taking the SOTU speech as an opportunity to inform the country's next president of what should go on the 2017 to-do list. White House chief of staff Denis McDonough wrote in an e-mail that the president would use the address to "think beyond the next election."

What, specifically, is on the itinerary for this year's nontraditional address? In a December briefing, White House officials provided a few hints as to what the president has in mind for his final year in office, and these topics will almost certainly make it into Tuesday's speech. Obama already followed through in the first week of the new year on executive actions to increase gun control, but officials said an executive order on climate change should be expected as well. Additionally, poverty and economic mobility, which Obama touched on during last year's speech, are still major national issues on the agenda.

Obama also pointed out in the SOTU promo video that, out of all the years he's hosted this shindig, he thinks this is the most optimistic he's been about the country's year ahead. Well, who wouldn't be optimistic after surviving seven years as head of state with a presidential retirement in sight?

The man deserves to go big in 2016 after enduring all of John Boehner's smirks, unamused glances, and nose-blows from SOTU addresses past.

Surely, Speaker of the House Paul Ryan will be too enthralled with Obama's 2016 vision to pull out a handkerchief.

More like this
What Is Barack Obama’s Net Worth? He Makes *Way* More Now As An Ex-President
By Hugh McIntyre
Michigan’s Governor Is “Going To Fight Like Hell” To Protect Abortion Access
By Andrea Zelinski
How To Fight For Reproductive Rights, Based On How Much Time You Have
By Courtney Young
Yes, Billboard Queen Angelyne Really Ran For Governor Of California
By Brad Witter
Get Even More From Bustle — Sign Up For The Newsletter