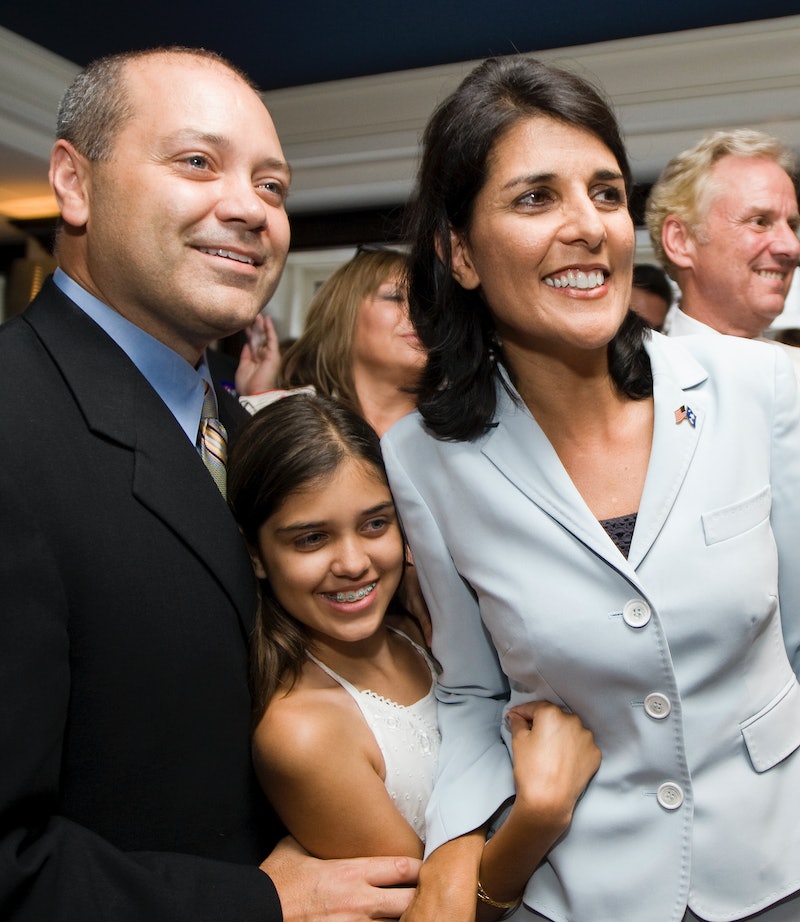 South Carolina Gov. Nikki Haley made big news this week when GOP bigwigs in Washington tapped her to give the Republican response to President Obama's State of the Union address. The move pushes Haley into the spotlight — but her husband, Michael, could also get a mention in her response, due to his 11-month tour in Afghanistan with the South Carolina Army National Guard.

Behind nearly every successful politician is their spouse, and Haley's was on the other side of the world for part of her first term as governor. Michael, an army captain, had been deployed as part of an agrobusiness development team within his unit. Gone nearly a year, he returned from Afghanistan's Helmand province in December 2013. Haley told the Associated Press at the time that she was able to take her "first breath in a year" when he came home.

Soon after, the couple sat down for an interview with the Associated Press, in which Michael described the Helmand area as "the wild west." He said that he wasn't afraid, but that his time had been tense. He told of how his convoy was hit twice by IEDs, but that no one had been seriously injured. In one of the two instances, he said that he was riding in the vehicle behind the one that was hit, and that he helped with the recovery.

Michael worked with local farmers and Helmand's version of the Department of Agriculture in an effort to get farms to move from growing opium to other types of crops. Money from the poppy plants that are turned into opium largely benefits al-Qaeda and the Taliban. If other crops can be made profitable, reducing the opium output is made easier. It was hoped that Michael's background in business would help in finding more efficient ways to bring the crops to market.

The year apart was difficult, although Haley and Michael told the AP that they communicated almost daily through email. "There's a lot lost in translation. You don't get the emotion, the humor you get in one-on-one communication on the telephone or physically being there," he said. Hearing about family activities after they happened was like "looking back in the rearview mirror at your life over the past year," he said.

Michael's deployment was not the first issue to bring the couple's relationship into the public eye. During her first governor's race in 2010, Haley was accused of having an affair with a former campaign advisor. She denied the allegation, and promised that she would resign if it were ever proven true. "It is this kind of South Carolina dirty politics that has to stop. The people of this state deserve more," she told radio station WVOC.

The Haleys were married in 1996 and have two children: daughter Rena and son Nalin. Since being home from Afghanistan, Michael has stayed busy. His National Governors Association's bio indicates that he is involved in nonprofit work in South Carolina, as a board member of the American Red Cross and as an advocate for at-risk youth and children in the state's foster care system.

Meanwhile, his wife has been earning more national attention in the wake of the Charleston church shooting that killed nine churchgoers at a historically important black church. Her response, which included pushing lawmakers to remove the Confederate flag from the state's capitol, drew her praise in Washington, leading to her selection for the SOTU response.