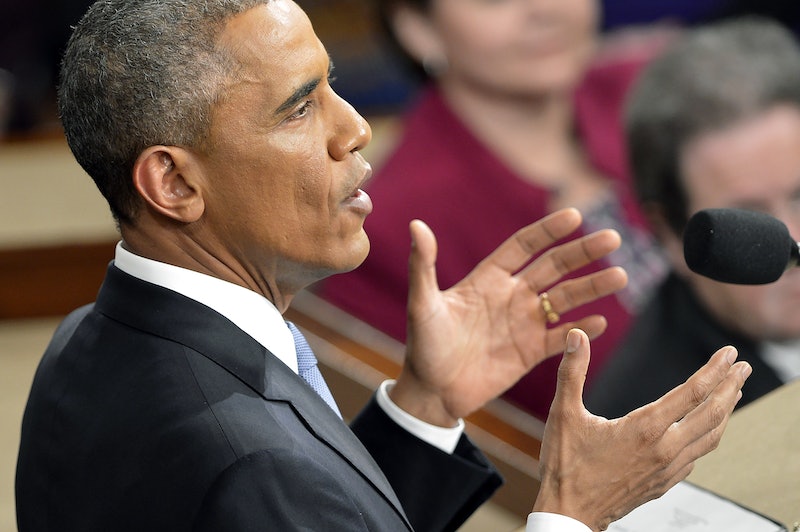 There's a lot that Obama's eighth (and final) State of the Union address should be about. Ahead of the Jan. 12 event, he's promised to focus on America's bigger picture and the broader issues at hand, and that's fantastic. If he delves into issues like socioeconomic inequality or climate change, even better. If he wants to bring up a few of his potential successors, that's all right, too. But there's one thing Obama's State of the Union speech should avoid entirely: any bashing of Congress.

The president and his GOP adversaries on Capitol Hill have not always played nice. To be quite frank, their dealings with each other over the last few years have gotten pretty ugly. Former Speaker of the House John Boehner, who wasn't even close to the president's most antagonistic colleague, led the bandwagon. He aimed to sue Obama in 2014, and once said that the president didn't have the guts to cut government spending.

The president hasn't had much of anything nice to say, either. In response to Republican proposals to block Syrian refugees from entering the U.S., he accused them of being "scared of three-year-old orphans." Ouch. At least the insults tempered a bit in 2015 compared to the year prior, when Obamz pretty much showed no mercy.

"After all we've had to overcome, our Congress should not stand in the way of our country's success," he said in a 2014 briefing on the U.S. economy. And in response to House Republicans' threats to sue him for using executive action, he got it down to the most basic of slams: "They don't do anything except block me and call me names."

But — and this is a big but — the State of the Union would be the perfect opportunity to set differences aside and focus on the potential for real bipartisan accomplishments. This will be Obama's first and only speech with newly-elected House Speaker Paul Ryan sitting behind him. And in his personal letter inviting the president to give the SOTU speech, Ryan wrote that, with a new year, they "have an opportunity and on obligation to find common ground." Clearly, the man's making an effort. Plus, Ryan grew some serious scruff late last year, and I feel like the Prez would respect anyone going for a no-shave November.

So the president should avoid harsh words against Congress in Tuesday's speech, because if he believes that citizens can come together as one American family, then he has got to believe that their leaders can do so, too.