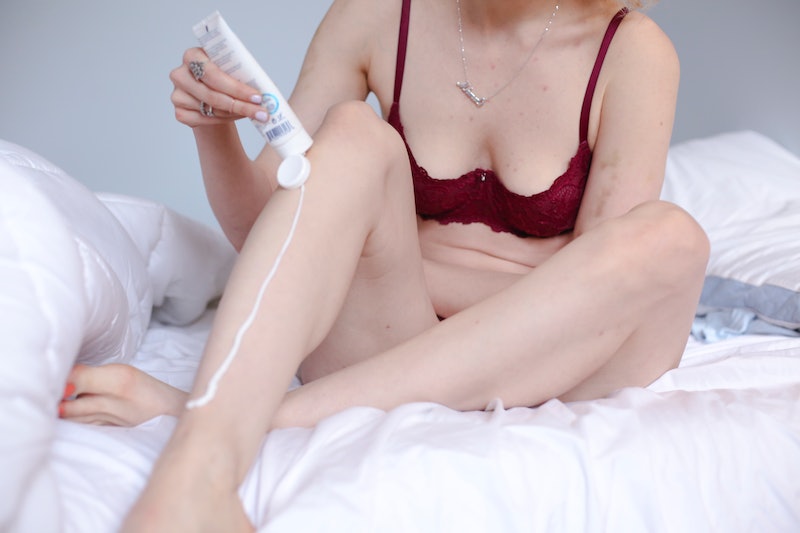 Everybody's got that one friend who promotes "all natural" cosmetic lines and posts irate Facebook rants about paraben regulations and beauty company conspiracies. But what's the fuss all about? What are the real scientific stories behind public worries about various chemicals in cosmetics, and are fears based on genuine evidence, early-stage research, or misunderstandings? Are parabens and sulfates as bad they're cracked up to be, and what are they doing in beauty products in the first place?

Bad news and dangerous materials in our makeup isn't exactly new. You just have to look back at Queen Elizabeth's propensity for piling on the lead face paint to know that humans have been risking their lives, unknowingly, for beauty for many thousands of years. (Lead still pops up occasionally in lipsticks, by the way.) All chemicals are not, by definition, bad: that's severely reductive and a misunderstanding of how science works. But there's always the problem of unexpected side effects, where a genius product turns out to have a killer set of difficulties nobody anticipated at the time. Look at CFCs: they were used as awesome refrigerants and solvents for years, until somebody discovered the nasty ozone layer problem. Whoops.

So here's the skinny behind five of the chemical additives we're told to avoid in cosmetics, and the science associated with their health risks.

What It's Used For: Parabens are also preservatives, and work as anti-bacterial agents to keep cosmetic products fresh.

Why People Worry About Them: Parabens have attracted a lot of negative attention because studies have found six different parabens inside breast cancer tumours in female patients, in concentrations that seemed to tie in with the use of cosmetic products. At the time, scientists were careful to point out that they didn't know that parabens caused cancer, just that they were present.

But a new study in 2015 found that parabens also prompted the swift growth of breast cancer cells in a lab environment. The tie between parabens and breast cancer may be strengthening, but scientists still point out that they don't yet have a smoking gun, and that most people have very low amounts of parabens in their daily lives.

What It's Used For: Sulfates are preservatives, and are most commonly found in hair products and bleaches, along with some skin products.

Why People Worry About Them: Sulfates have been a part of preserving food and substances since ancient Greek times, but that doesn't mean it's always been a good idea. The good news? Sulfates are essentially fine, if you don't have a sensitivity to them. If you do, however, the consequences can be extremely severe.

Sensitivity is rare but not extremely uncommon: over one percent of the population probably has a sensitivity, and you're far more likely to have it if you're already asthmatic. Scientists have identified a huge swathe of potential reactions, including "dermatitis, urticaria, flushing, hypotension, abdominal pain and diarrhea [and] life-threatening anaphylactic and asthmatic reactions". So if you have asthma or think you've got a sensitivity, steer clear of sulfate-containing products.

What It's Used For: Formaldehyde has been found in a bunch of hair straightening treatments marketed across the USA.

Why People Worry About It: Formaldehyde is not exactly the most people-friendy of chemicals. There's a reason its main claim to fame is preserving biological specimens in labs. There have been a few small studies on links between inhaling formaldehyde at work and the development of cancers of the sinuses or nose, but no big-time proof as yet. Mostly, though, it's irritation that's the problem: having formaldehyde in the air around you causes eye, nose, throat and lung issues, and it may also have effects on your menstrual cycle.

What It's Used For: Phthalates are used across a range of cosmetics, from hair sprays to nail polish and perfumes, to make things smoother and more solvent.

Why People Worry About It: Fun fact: one of the big worries about phthalates isn't actually from the cosmetics industry at all. They're often present in cheap sex toys as plastic softeners, and there's been constant demands for more regulation to phase them out. The main issue is that phthalates seem to interfere with normal human hormone expression. Exposure to phthalates has caused reproductive problems and birth defects in lab animals, and a 2010 study found a link between phthalate levels and breast cancer in women.

What It's Used For: Mercury has been found in many skin-whitening products produced across Asia, Africa, and South America.

Why People Worry About It: Remember the Mad Hatter? People have known about mercury poisoning for a long time; hatters were historically stereotyped as mad because they underwent serious mercury exposure while making headgear.

Many skin-whitening creams from outside the U.S. have been shown to have a high concentration of mercury: while the U.S. limit on mercury is one part per million, surveys have found products with as much as 210,000 parts per million. Even short-term exposure can cause all sorts of problems, from digestive issues to eye problems. Longer term, you're looking at possible severe brain problems, shaking hands, mood disorders, and the endangerment of fetuses in pregnant women.

More like this
This Company Will Send STI Tests Right To Your Door
By Lexi Inks
All The Products Hailey Bieber Used For Her Birthday Makeup Look
By Olivia Rose Ferreiro
10 Makeup, Hair, & Skin Care Gifts That Beauty Lovers Will Drool Over
By Erin Stovall
Kim Kardashian On The Beauty Hack That “Changed My Life, My Skin, My Confidence”
By Taylor Jean Stephan
Get Even More From Bustle — Sign Up For The Newsletter