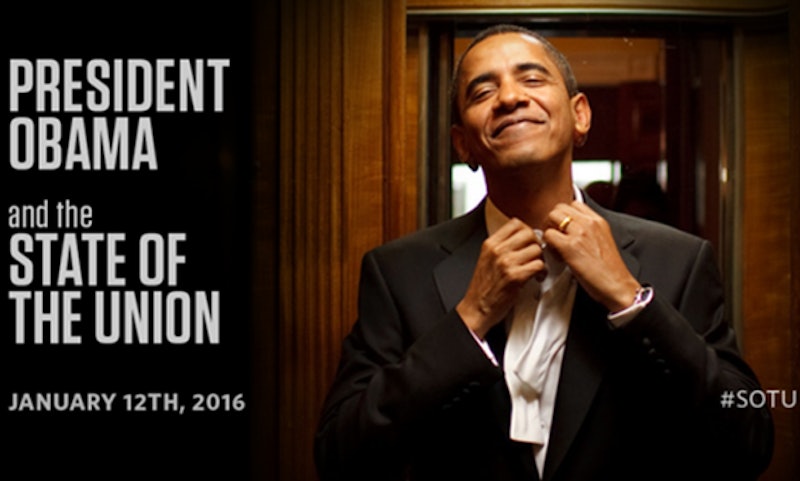 As his second term comes to an end, President Obama will reflect on the past seven years in his final State of the Union address on January 12. After a presidency that saw a financial crisis, the emergence of ISIS, and almost-regular showdowns with Putin, Obama is probably so over this commander-in-chief nonsense. As he hints in a trailer for the event, the president is loosening his tie for his last SOTU address. However, it's his print ad that really shows Obama shedding all formalities, like dirt off his shoulders. Obama's 2016 SOTU ad, which features Obama looking more swagtastic than ever, looks like it could be a promo for, well, anything but an official White House event.

In the trailer for his upcoming SOTU address, Obama casually sits on the desk in the Oval Office with his sleeves rolled up and his jacket nowhere to be seen. As he talks about "the road we've traveled together these past seven years" and what the country needs to do to become a "stronger, better, more prosperous America," one can't help but think he appears to be remarkably more relaxed than we've seen him.

Perhaps it's because he's looking forward to wrapping things up at the White House, or perhaps it's because he's had to stifle a part of himself and now no longer feels the need to — we saw a hint of it last year with his "I know, 'cause I won both of them" quip. Either way, Obama is looking more boss than ever in his latest SOTU ad. See for yourself:

In fact, there's so much swagger coming off the ad that it'd be a waste to use it all for the SOTU. Here are six things Obama's SOTU ad looks like it could be advertising instead.

If the president had a scotch, it would be Barack Obama Red White And Blue Label. In the commercial, he'd say, "After a long day of putting House Republicans in their places, I like pour myself a glass of... myself."

If Obama were a DJ, he'd probably spin a lot of Run–D.M.C.

The way Obama is sticking out his chin with that ear-to-ear grin, it's like he can't wait for Michelle to snuggle up to him and feel how close his shave is.

Obama is most likely standing somewhere inside the White House, but he could also very well be in the elevator of a trendy new boutique hotel on his way to cocktail hour in the lounge.

Who wouldn't want to dress like the leader of the free world? Plus, Obama is ballin' so hard in his suit, it's almost unbearable.

Hottest Mixtape Of The Year