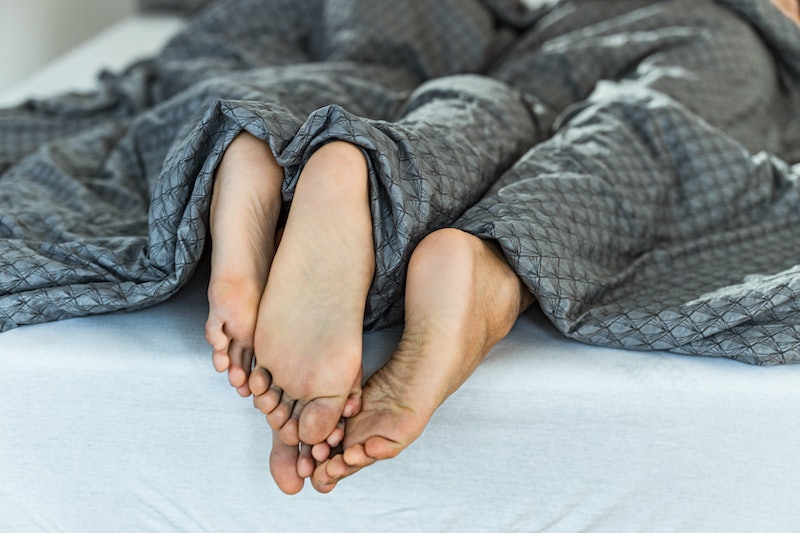 I heard someone crack a sex joke the other day that went something like "as soon as I said I do, she started saying I don't." There are ways sex can change after marriage, but all roads definitely do not lead to entering your sexless years. It can be just the opposite. Getting married can unleash your inner sex ninja. Or walking down the aisle can ignite a new intimacy that makes everything seem hotter and more meaningful. Of course, it can also make you lazy and complacent because you know your partner will always be there. It just depends.

For some couples, sex is everything. For others, it's an afterthought. When I worked with couples as a Domestic Violence Victim Advocate and Certified Planned Parenthood Responsible Sexuality Educator, I saw the gamut from roaring sex lives in people who have been married decades to stagnant ones in new, young couples. There were even couples who, due to time, injury, stress, or just life, were totally fine with their limited sex lives. They had other things to worry about. There's not one universal truth about married sex, other than it is what you make of it.

As a newlywed myself, I have noticed a few specific changes first-hand that, mixed with my experience working with couples, should give you a pretty good idea of what to expect once your shared bed becomes your marital bed.

You're married! You have paid the government and filled out the required forms, and now you're a union until death parts you, or you pay a ton of money to legally break up. That's hot! No other person is going to sex you up, or your partner (unless that's what you're in to, which is cool too) for the foreseeable future. This doesn't seem like much of a sex game changer, but it totally is. It gives you a new closeness and sense of joy while you're sexing it up. You're all like "this is totally mine, and my partner wants me to be totally his/hers." It's great.

2. You Have More Confidence

Again, you're married. It's not like your spouse is going to break up with you tomorrow over something you try in the bedroom tonight. You're stuck working things out! And that's a great confidence booster. I had read this before getting married and did not believe it to be true, but it turns out, yep, totally true. I was less self-conscious about my body, my performance, and what my wife was thinking and was more able to just enjoy. Thank you marriage!

When you're dating, especially in the beginning, you probably feel at least a little bit of pressure to make sure you're at your best all the time. I'm not saying that once you're married, you should stop making an effort to be your best self, including looking like your best self (whatever that means to you personally), but I'm saying that once you're married, sometimes you're going to be in your sweats, with food stains on your tank top and you're still going to go from that to sexytimes in two seconds flat. This happens in long-term relationships, too, but there's much less worry when you're married. You're just like "this is who I am, this is how I look" sometimes. There's much less prep involved.

4. You Can Get Super Adventurous

This goes hand-in-hand with your confidence. Even if you were adventurous before, you could still get that supercharge of sexual freedom that has you going deeper down the kinky rabbit hole than you ever imagined. Plus some couples find that being adventurous is crucial to keeping sex interesting over the long haul. And if kink isn't your thing, even just trying new positions could be a fun new project. Your married sex life is it's own thing now that you have to shape and perfect over many years. It's a fun project to tackle.

Sex is important to maintaining intimacy and keeping those gooey love feels flowing. As your marriage progresses and months turn into years, you might find that sex is not about a desire to get hot and sweaty with your partner, but more about keeping you close and connected. You may find that sometimes you just have sex to satisfy a need with no romance or fanfare involved. You might use it to get pregnant in a totally clinical and unceremonious way (especially if you're battling fertility issues.) You may also be able to use your sex life as a tool to gauge how things are going in your lives. While this isn't true for every couple, some couples slow down or stop having sex when life is too stressful or when there are unresolved conflicts.

6. You Learn That Arguing About Sex Sometimes Is Normal

You never really argue about sex until you've spent a lot of time in a relationship with someone. When you're married, you might find that you cross words occasionally after one partner gets shot down or one person does something that isn't fun. One partner might have a higher sex drive than the other. One partner might like something the other doesn't. Sometimes it takes years together to get to these kinds of issues, especially since sexual tastes and desires change over time.

7. You Have Your Slow Times & You're OK With It

When I was dating, even in long-term relationships, I always worried that slow sex times meant something was wrong or that my partner was not happy with me. As a married person, I know that sex droughts come with the territory. Now, I look at sex with a loooong lense, meaning our whole lives. It only makes sense that there would be slow times. And I trust our communication skills. So a lack of sex is never a big deal now. It passes.

All of these things might apply to you and your marriage. Or none of them. The point is, marriage truly does change things, including sex, for many people, and it can definitely change for the better, too. No need to worry that marriage is a death sentence for your sex life.

More like this
Are Gemini & Scorpio Compatible In A Relationship?
By Kristine Fellizar
16 Ways To Jazz Up Your Tinder Bio This Year
By Lexi Inks
15 Flirty "Thinking Of You" Texts That’ll Make Your Crush’s Day
By Lexi Inks
The “Rules For Dating” TikTok Trend, Explained
By Lexi Inks
Get Even More From Bustle — Sign Up For The Newsletter