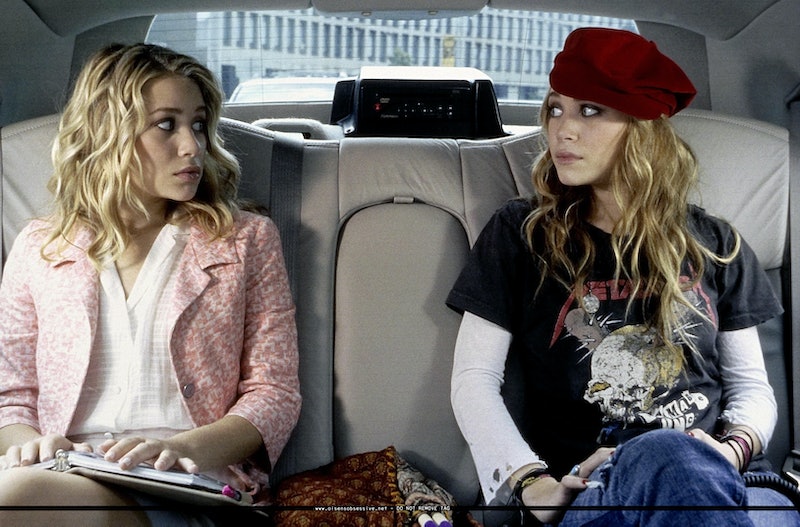 In the '90s, you and your BFF were in ultimate bestie mode. It was the age of friendship necklaces and shared notebooks and color coordinating capris and jean jackets. Life was good for best friends, there were tons of friendspirational TV shows like Saved by the Bell and Dawson's Creek and songs literally made for friends like The Spice Girls' "If You Wanna Be My Lover" and Vitamin C's "Graduation". It was as if popular culture decided that was the decade for friendships to flourish and wanted to provide as much thematic usable content as possible.

But because we weren't as technologically advanced or communication savvy, it wasn't always easy to keep things peachy with your bestie. Kids today have it pretty good; they're in constant communication with the touch of a screen, they're up-to-date with each other's news feeds, and always in-the-know via social media. That's not to say that today's kids don't have bestie issues, they're just very different.

Nineties bestie problems mostly stemmed form a lack of options. There's much more to fight over when there's less to choose from. Whether it be who got to be Player One, or who got the third Lunchables Pizza, our bestie of the '90s struggles were so real to us then. If you grew up with a bestie in the '90s, you probably remember some of these problems:

Who Got To Be Mark Cohen

Roger Davis is surely the sexier one with a cool Cobain vibe, but Mark got to sing 10 times more than anyone else in the cast. So if you were a Rent-head, there could only be one Mark. There's nothing more annoying than singing along to the soundtrack with your bestie, all the while fighting for verses. You had to decide ahead of time and stick to your part.

One of the ways '90s besties liked to show their appreciation for each other was to knot a bunch of strings together, trade them, and wear them around their wrists and ankles. While it was a fun activity and a loving gesture, it was also a sort of subconscious kind of marking. If your bestie showed up to a playdate with a new friendship bracelet, your heart was a little bit broken. How could they cheat on you with another friend like that?

Who Got To Be Zac Hanson's Girlfriend

If you were Zac's age in the '90s, he was the brother elect. You wanted him, needed him, had to have him. But if your bestie felt the same way, chances are you'd duel it out, more than often. Because Zac Hanson could only have only pretend girlfriend, and it was either you, or your bestie.

There was always a red or pink candy that was better than the rest, or a red or pink character that was cooler than the rest. Because we were very possessive as wee little besties, there could always only be one. So really, the perfect bestie to have is the one who wants the orange Starburst and the purple Popsicle and the blue Power Ranger.

For some reason, in the early to mid-'90s, wearing matching outfits was not considered a huge fashion faux pas — it was considered a super fun thing you plan with your bestie the night before on the phone. You'd show up in matching Limited Too graphic long sleeve tees and matching blue denim bell bottoms and Skechers chunky heels and feel like superheroes. It made your day at school so much more fun. But if your bestie forgot, or got lazy with one part of the outfit, you were totally bummed.

When you and your bestie first fell in love with MK & A, you probably both fought over A. Despite the fact that you couldn't always tell them apart, Ashley always seemed to be a little bit more girlish and fun. But as time went on, Ashley and Mary Kate became individuals. Their personalities began to shine through and the differences between them began to show themselves. By the time you were leaving the '90s, you were both fighting over Mary Kate.

Mario Kart was an ultimate pastime in the '90s. It was considered a sport of us indoors kids. And while there were many great drivers to chose from, Princess Peach was one of the fastest and best handlers on the road. She could swing around tight corners without flying into the next country and she could pass all the guys on the straightaways. Maybe you took turns, but probably you fought over her.

Bop It And Skip It

These toys were great for only children. Much like solitaire, they really gave you something to do when you were alone. But when you're hanging out with you bestie and there's only one Bop It or Skip It, you're stuck waiting around for the other person to finish playing with it, and there are always rules. "I get to lose three times before you get a turn, no four, five ... I get to lose 10 times before you get a turn." Remember that?