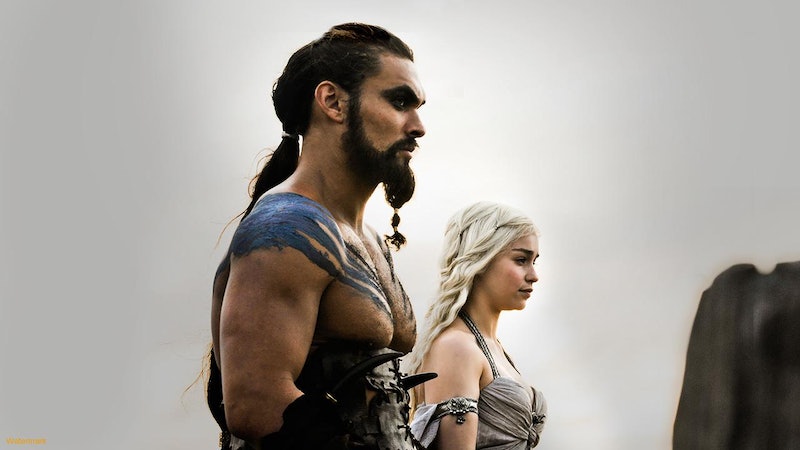 We know that sex sells. And we know that HBO shows, which feature more nudity and sex scenes than most networks, are some of the most popular on television. Any correlation? Possibly. One writer from Uproxx decided to find out just how long into each of HBO's most popular series it takes before the first sex scene is shown. And you guessed it, in most cases it doesn't take long at all. See the results, from fastest to most "conservative" below:

But what exactly constitutes a sex scene, and what are these scenes attempting to depict other than literal intercourse? In True Blood, the first on the list, it takes a measly 20 seconds until we see some action. But what this writer considers a sex scene is a hand job in a car. The creators of True Blood said from the beginning that they equate vampires with sex, so this early introduction to "vehicular sex" (thanks Clueless) sets the tone of urgency and passion, and the rest of the series follows suit.

In Sex and the City, our first glimpse at the show's namesake is a silhouette of a woman on top of a man in the moonlight. With a show with the word "sex" literally in the title, audiences might have been disappointed if the series had waited another moment to get to the good stuff. The scene itself, which features a a woman on top, clearly enjoying herself, we know the show will not only be about sex, but how sex effects the lives of women for better and for worse.

The first sex scene in Lena Dunham's critically-acclaimed Girls, shows Adam Driver's character demanding Dunham take her pants off and get on all fours, something she does, reluctantly, and allows the first of many intensely awkward sex scenes to unfold. Yet this too sets the tone for the whole series: awkward and often painful to watch, just like the lives of these four twentysomethings and their sexual partners. Similarly, Games of Thrones's first sex scene is a healthy representation of how most of the characters view sex: primal, masculine, and hurried. Just think of all those initial scenes between Khaleesi and Drogo. That could hardly be called love-making.

So while HBO is chalked full of unnecessary nudity and often doubles its airtime with the amount of gratuitous bone seshes it features, sometimes the sex is key, and the type of sex, the foreplay (or lack thereof), even the position in which these characters procreate often offers an insight into all aspects of our favorite HBO leading ladies.

More like this
What Makes A Sally Rooney Sex Scene So Hot?
By Samantha Leach
Colin Firth Revealed His Favourite Mr. Darcy (& No, It's Not Himself)
By Sophie McEvoy
'Doctor Who’s New Star Is Already Huge On TikTok
By Maxine Harrison
What’s New On Netflix: A Victoria Justice Rom-Com & The Return Of David Letterman
By Arya Roshanian
Get Even More From Bustle — Sign Up For The Newsletter