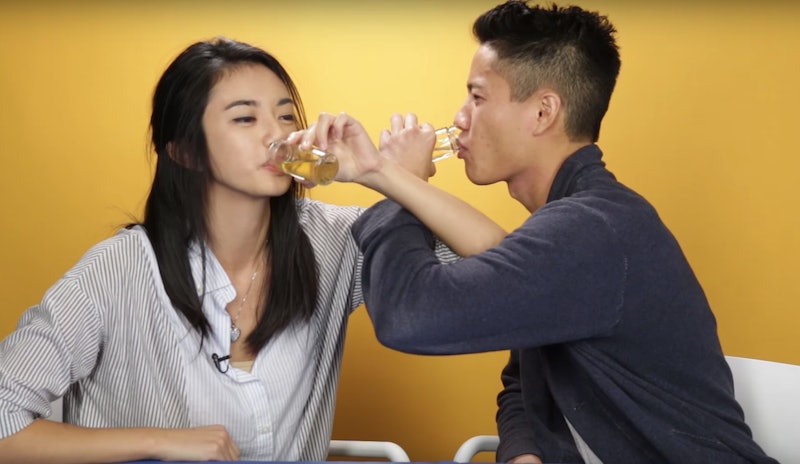 I don't know if we have run out of things to taste test on the Internet or what, but BuzzFeed decided to have their people drink their own pee. That's right. You didn't misread that entire sentence. People actually drank their own pee on camera. From the looks of it, these folks are brave and due for a promotion as soon as humanly possible. In fact, contracts should be drawn up as soon as you finish reading the rest of this paragraph.

When I think of people drinking urine, it's either because of that scene in Dodgeball where urine is described as sterile or because of a survival show. In both instances urine was not consumed, but merely talked about as a possibility. That should give you an idea of how rare it is for me to watch people do this type of stuff. I couldn't believe I was having such a visceral reaction. I heard myself saying please don't, over and over again. I guess our brains are just programmed to think pee is icky and not something that belongs in our mouths. Evolution, you are incredible. I also couldn't help but hope that BuzzFeed decided to switch the pee for something that resembled the substance. Like the television magic of reality TV that I am so used to by now that nothing really shocks me. Alas, we won't know unless one of you has an inside scoop. If you do, feel free to let me know.

In my personal life, urine was used in a weird way only once. I was living in Russia at the time and my grandmother was with me at my family's da-tcha (summer house). I was maybe five. On her way to the kitchen, my grandmother tripped and sprained her ankle on the stairs. Her ankle swelled up to a ridiculous size. As she elevated her leg on a chair, she turned to me and said something I have not forgotten to this day. Dasha, go and pee in this plastic bag and bringing it back to me. You might be wondering at this point — why? Well, my grandmother was using an old medical trick, which apparently involved putting a bag of urine on your swollen ankle. Some of you may be throwing up right now, but it worked. people. Her ankle swelling went down and she wasn't in as much pain by the end of the night. Urine is king. And while that story ended well, I don't recommend you drinking it. Instead, look at the highlights from BuzzFeed's video.

1. My Initial Reaction To The Title Of The Video

As any person who has ever been in an awkward situation knows, cracking jokes to release tension is a must. Even if that means telling your co-workers that you want to drink your pee only if it's cold pee.

3. The Moment Of Truth

Look at them go! I am truly impressed by the grace these people are showing in the face of having urine that close to their mouth.

A lot of people gagged and made barfing sounds. Some spoke about after taste. Basically, no one found urine to be delicious or worthy of a cooking show.

If you are planning on being an online dater, know that your dating profile will be effected by a video where you drank your own pee. I cannot predict if it will be a negative or a positive one at this time.

Watch the full video below!