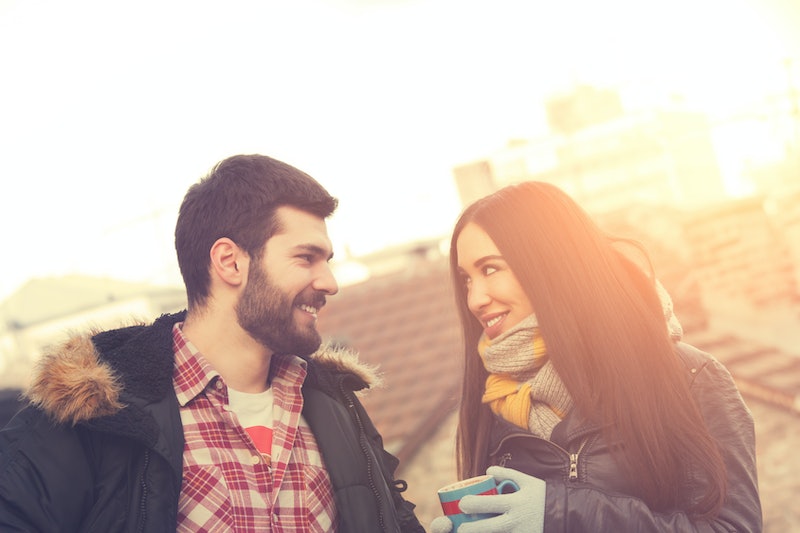 While dating apps have had their fair share of criticism in the past for being a place on your phone where online harassment, dick pics, and catfishing all exist, that’s really not always the case. Because it is online dating's peak season until Valentine's Day, dating app Hinge analyzed data and compiled a list of tips based on their users who have had success finding love on dating apps. So what we can we learn from couples who won the swiping game? Let’s just say, in order to attract the relationship you want, maybe a little change (and patience) is in order.

In their latest study, Hinge’s team of data scientists studied the profiles and behaviors of 1,000 couples who met through the app and ended up dating within two months. According to Hinge, member sign-ups spike over 50 percent in early January due to the fact that people want to find someone in the new year.

So, if your goal is to go from single to taken this year, here's what you should know about the swiping habits of couples who met on Hinge, because it may be as simple as filling out certain parts of your profile.

1. They Filled Out These Two Questions

According to Hinge, 80 percent of couples who met through the app had their job and education listed on their profiles. Since Hinge can pull this info in from Facebook, it's an easy one to include in your profile — and perhaps a good conversation starter.

2. They Did A Lot Of Right Swiping

The same routine brings the same results — so try being open and swiping right on someone who's not your type. According to the Hinge survey, women who met their partners on the app were 20 percent less picky than average.

3. They Didn't Get Discouraged

There’s a reason for the saying, “don’t put your eggs in one basket.” Until things are further established, of course. According to Hinge, couples actually messaged with an average of 16 other people before finding their significant others.

And, don’t get discouraged if the first few dates with new people don’t work out. The first person you match and meet with might not click. The second or third or even the tenth person you decide to meet up with might not even stick either. But don't lose hope.

4. They Took Time To Get To Know Each Other

According to Hinge, people who met through the app went on an average of four to five dates before making anything official. So, don’t jump the gun and try to define the relationship so quickly. Keep things light, no pressure, get to know each other, and just enjoy the process of dating.

5. They Established Trust Before Meeting

Don't feel like you need to rush into texting each other before getting someone's digits. Couples who met on Hinge messaged each other for three days before meeting and exchanged about 25 messages before exchanging phone numbers.