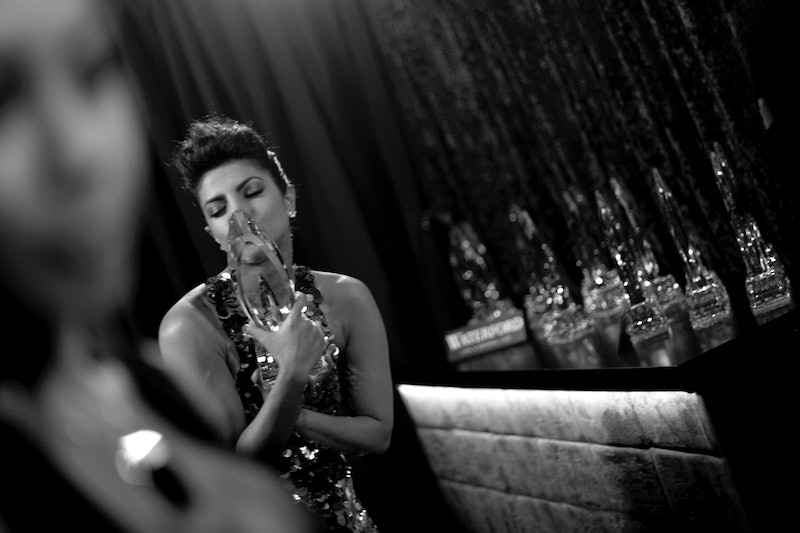 Wednesday night's 42nd People's Choice Awards marked a monumental moment in Hollywood history: South-Asian actor Priyanka Chopra took home the "Favorite Actress In A New TV Series" award for her lead role as bad-ass agent Alex Parrish in Quantico, and as People's Choice points out, Chopra officially became the first South-Asian actor to ever win a PCA. Though this may only seem like a small step toward fixing the lack of diversity issue that plagues the industry, I am here to tell you (politely, of course), you are wrong. Small or not, it matters — a lot.

Chopra's victory last night was a major one for me. I grew up with television, to a fault. I watched it every day after school, and constantly packed my weekends full with reruns of sitcoms from the '80s and '90s. It wasn't until I was 18 that I realized because many shows often lacked diverse casts, the only characters I could really aspire to want to be like were white — and it was affecting how I viewed myself. At the time, I never realized the dehumanizing effect that overtook my mind was attributed to the lack of representation of people of color in movies and television — that is, until I saw an episode of The Office with Mindy Kaling in 2005. Her dark skin, shiny black hair, and wide brown eyes were each something I was familiar with, and something I finally understood. Though she was Indian and not straddling the line between Caribbean and West Indian like myself (I am Guyanese), she was not white, and she was a woman, and she was on TV. Finally.

Today, Mindy Kaling, Priyanka Chopra and Aziz Ansari are all faces I can look to in order to see similarity and acceptance — but it's still sad that in 2016, I can still only list three names in mainstream Hollywood. It goes to show that the industry still has a far way to go in diversity. According to a 2015 report from Women's Media Center, Hollywood's senior management is still 92 percent white, while, according to the same report, only 12 percent of characters on-screen were female, and 17 percent of projects failed to cast any African American actors in speaking roles at all in 2014. That's unacceptable. After 2015 saw a ton of influential figures calling out the underrepresentation of different races in the media — from Aziz Ansari's New York Times piece on the race problem in Hollywood to Viola Davis' Emmy win acceptance speech — speaking up and out is the only way to cross borders and break boundaries.

With shows like How To Get Away With Murder, The Mindy Project and of course, Quantico, all casting women of color that I can see myself in and relate to, Chopra's win solidified a personal victory. Her acceptance speech became even more meaningful in the positive stages to come towards diversity in the media: "[It's] my first year in America and to come to another country and get this kind of acceptance, I guess [that] is what America is all about," said Chopra. "Thank you all for accepting me."

More like this
'Heartstopper’s Kit Connor Revealed Why He Doesn't Label His Sexuality
By Nola Ojomu
'Heartstopper’s Joe Locke Has A Sweet Message For Queer Fans
By Sam Ramsden
Jake Daniels Just Became The UK’s First Active Football Player To Come Out As Gay Since 1990
By Sam Ramsden
Sandra Bullock, Girlboss Extraordinaire
By Matt Harkins & Viviana Olen
Get Even More From Bustle — Sign Up For The Newsletter