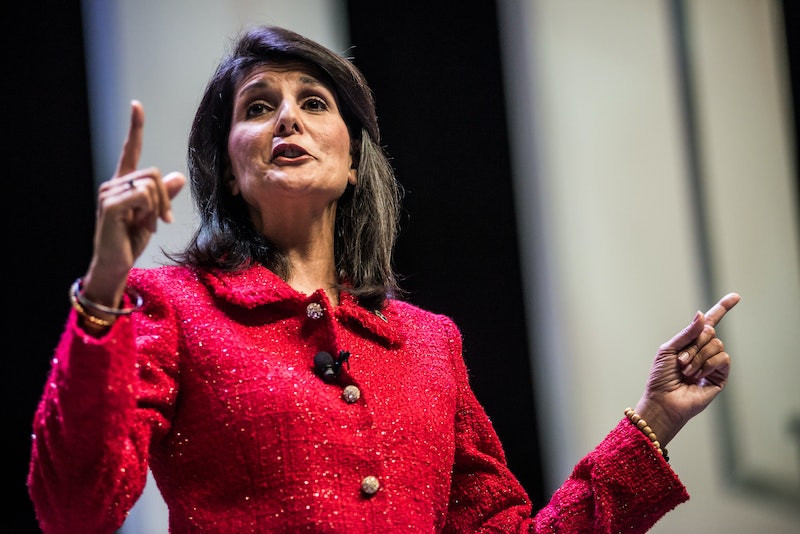 The nation's youngest governor, South Carolina's Nikki Haley, will give the Republican rebuttal to President Obama's State Of The Union speech on Tuesday. Speaker of the House Paul Ryan and Senate Majority Leader Mitch McConnell chose Haley to address the nation on behalf of the Republican party, and you can stream Nikki Haley's State of the Union response online here following the State of the Union.

"In a year when the country is crying out for a positive vision and alternative to the status quo, Governor Haley is the exact right choice to deliver the Republican Address to the Nation," said Speaker Ryan in a joint statement with Senator McConnell. McConnell added "Governor Haley knows the American Dream and wants to see every American share in it, and we're pleased that she will be delivering this year's Republican Address‎."

For the first time in 50 years, the GOP is calling the speech an "address" rather than a response. The subtle change is an interesting one, and could be an attempt to get viewers to see the speech as a more autonomous move on the GOP's part.

The GOP's pick for the speech isn't surprising — rumors have been swirling about Haley's potential for vice presidential contention. Ryan, who gave the speech in 2011, was picked as Mitt Romney's running mate for the 2012 election the following year. The daughter of Indian immigrants, Haley is South Carolina's first female and first minority governor, and the first South Carolinian to ever give the rebuttal speech. Combined with her particularly high approval ratings, Haley's demographics are a good symbol for the GOP, which often struggles to connect with people of color and women.

The GOP is also trading on Haley's recent visibility in the media. Between the Charleston church shooting in June, the long-awaited removal of the Confederate flag from the South Carolina State House, and the incident at Spring Valley High School in the state's capitol, Haley has been featured in the national news a lot over the past year, and has the name recognition to make a serious impact with voters if her speech goes well.

But there's a bit of history of bad luck for the politicians chosen to give the rebuttal. Bobby Jindal's awkward 2009 speech was roasted by pundits and even compared to Kenneth Parcell from 30 Rock. Just a few years after his speech in 2010, former Virginia governor Bob McDonnell was charged on felony corruption charges. Marco Rubio was the butt of jokes on comedy shows for weeks following his infamous sip of water during the 2013 GOP response.

The State of the Union usually lasts about an hour, and the response speech is generally about 15 minutes long, so make sure to tune in on Tuesday at 9 p.m. ET to watch. If you don't have cable, the SOTU will stream live here and you can watch the response speech here.