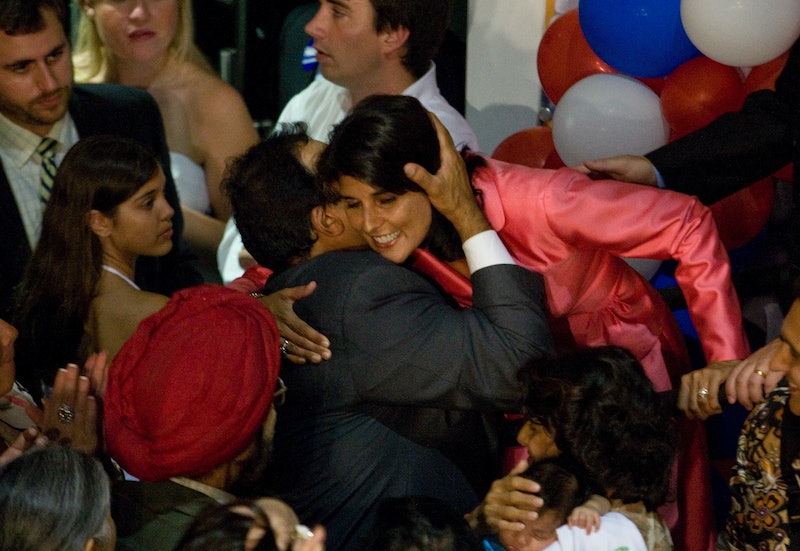 South Carolina Governor Nikki Haley may be all politics when she's at the State House. And her upcoming Republican party response at President Obama's State of the Union address will only be putting her further into the political spotlight. But when it comes to her social media accounts, Haley is all about that family life. And the miniature Haleys, comprised of the governor's daughter and son, make regular appearances as sidekicks to their governing mom. So who is Nalin Haley, Nikki Haley's son?

Nalin, now 14, appeared to be a supportive brother, or at least a good obeyer of Mom's commands, even at a young age. Back in 2013, Haley wrote in a Facebook post: "Nalin and I went to see Rena cheer her first game tonight. I emailed Michael Haley a ton of pictures.....proud mom!" Heck, he's not just supportive. He's downright angelic for attending all the necessary functions and posing for the obligatory photos, always with a smile.

There are some perks to being the son of a fabulous state governor, though, like moving into the Governor's Mansion. Or being allowed to dump ice water on your mom outside said mansion for a good cause. Or going to a Clemson Tigers game with the family and getting a football toss from Hall of Fame quarterback Dan Marino.

Not to mention joining your parents in meeting author, radio host, and religious apologist Dr. Ravi Zacharias, who you view as a mentor. Gosh, the kid's a thoughtful one. Then there are the universal kid perks. The new year also brought the Haley family a new pet: a labradoodle named Bentley. And while Nalin seems calm and collected in the family photo with the new pooch, what teen wouldn't be gushing over a fluffy puppy?

If life in the political spotlight ever got to his head, the youngest Haley hasn't made it known. Following his mom's gubernatorial win in 2010, Haley told The Post & Courier that he wasn't exactly expecting special treatment at school the morning after the election.

I thought they didn't know because normally you wouldn't stay up that late on a school night. We were at PE and I opened the door and everyone was shouting my name. They were like, "Nalin, Nalin." And they start hugging me.

What he did make known was his spot-on ability to respond to the media like a pro politician. When asked by a reporter if there was anything the people of South Carolina should know about his mom, the 9-year-old Nalin replied, "I think my mom said everything."