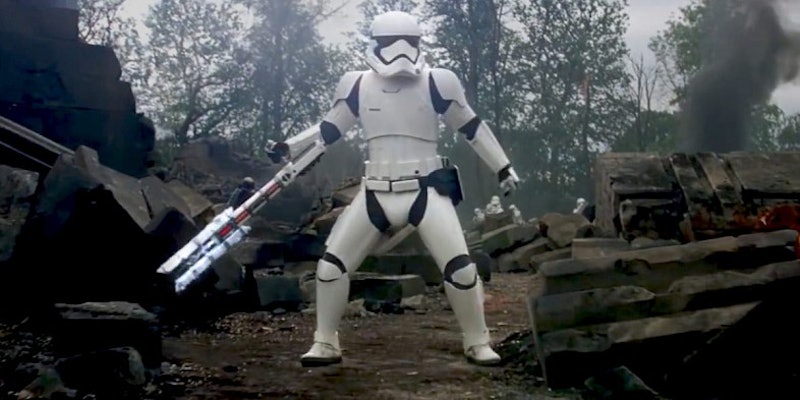 A new fan favorite awakens. If you're at all emotionally involved in the Star Wars universe right now (that is, you have a heart and a pulse to go with it), you've probably latched onto the baton-wielding stormtrooper that battles Finn in a pivotal moment during Force Awakens. Up until recently, this character was lovingly called TR-8R by fans based on his anguished cry of "Tratiro!" upon seeing Finn with the resistance. Well, according to Starwars.com, TR-8R real name is actually FN-2199 (well, "name") and his friends actually call him Nines. And his backstory opens the door for a lot of inquiries about this next generation of stormtroopers.

As it would turn out, Nines had trained and served on a squad with Finn back in the day. He’s even pictured as a helmet-less red haired dude next to our boy in Phil Noto’s illustration from Before the Awakening. Crazy Town! We also know that his Z6 baton isn’t just a cool weapon he has for shits and gigs: Nines is part of the riot control, a high-ranking squad that’s brought in to, well, squash rebellion and enforce conformity within the First Order.

It’s a lot to process, I know. You can take a breather if you want.

So now that this is all out in the open, you have to wonder...

1. Do All Stormtrooper IDs Start With FN?

Or is it this specific fleet of new wave stormtroopers? Like, is there enough where across the galaxy we have AN, BN, CN, DN, and EN stormtroopers too, or nah?

3. And What Exactly Does FN Stand For?

4. What Do Stormtroopers Do In Their Spare Time?

We're led to believe that this new wave of stormtroopers were taken from their families to be killing machines for the First Order (or janitors, whatever). But Nines has managed to build friendships within his fleet that have given him an actual nickname. Granted, Poe basically did the same for Finn after knowing him for three minutes, but the point is that Nines was able to form some sort of relationship with his co-workers. But how, when? While they're gunning down a planet, or is it down time, shooting some b-ball on the courts? I never considered that stormtroopers might have time for recreational activity, but it makes you wonder...

5. What Qualifications Do You Need To Become A Part Of The Riot Control?

I've never been in the military myself. What I was able to gather from that experience is that you have to take a written test to gauge, I don't know, your military IQ or something, and that defines your placement. So maybe there's a system like that in place?

6. How Long Is Stormtrooper Training, Anyway?

Again, the new squad is taken from very early childhood, if not infancy, to become these First Order foot soldiers. It can be assumed that training starts from the moment they're adopted into this twisted dark side family. But is there like, a Stormtrooper pre-school? Is it akin to what was happening with the jedi younglings in the prequels? And when does it end? When you're 18, are you deemed a full-fledged Stormtrooper and there's a whole ceremony? Do they play "Graduation" by Vitamin C? I just want to know.

7. Is The Current Stormtrooper Uniform The Only Update They've Had In 30 Years?

Or is this just the new line for Spring?

8. Was Finn Seriously The Only Stormtrooper In Recent History That Betrayed The First Order?

Or no, there is another? Or was another, survey says any other traitors wouldn't have gone too far.

9. And Most Importantly, Just How Close Were Finn and Nines At The End Of The Day?

It'll probably be a while before we get any direct answers (if we get any more answers), but there's no doubt that Nines' little reveal opens an exciting new door in the Star Wars world.