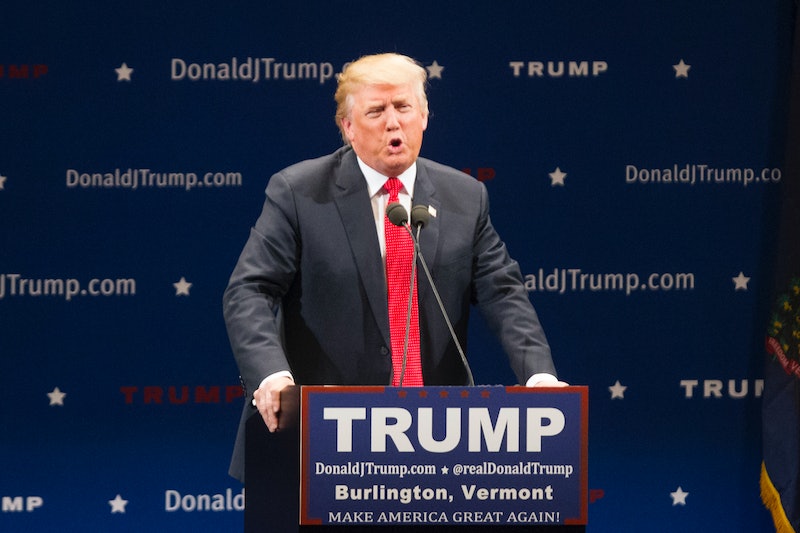 While President Obama championed stricter gun control laws in a CNN-hosted town hall in Virginia Thursday night, Donald Trump was in Vermont criticizing gun-free zones throughout the country. "You know what a gun-free zone is to a sicko?" Trump asked at his campaign rally. "That's bait." The GOP front-runner has continuously advocated for upholding the Second Amendment right to bear arms, but his stance on gun-free zones shows just how far Trump's willing to go on the gun issue.

Not only do some military bases have gun-free areas, but schools across the country are also considered gun-free zones, meaning no one can carry a firearm of any kind on campus. Trump promised to eliminate all such restrictions as soon as he becomes president. "I will get rid of gun-free zones on schools, and — you have to — and on military bases," he said Thursday. "My first day, it gets signed, okay? My first day. There's no more gun-free zones." Trump has called for an end to gun-free zones since entering the presidential race, saying in July: "We have to get rid of that whole gun-free zone nonsense and just stop it. We gotta stick up for the Second Amendment."

Ironically — or perhaps hypocritically — guns are banned at the Trump National Golf Club in Los Angeles and the Trump International Hotel Waikiki Beach Walk in Honolulu, according to Think Progress.

Gun-free school zones were first enacted by the 1990 Gun-Free School Zones Act, which prohibited anyone from knowingly possessing a firearm in a school zone. The Supreme Court found the law unconstitutional, and a new version was adopted in 1996 clarifying that the gun "has moved in or otherwise affects interstate commerce" in order to quantify a federal offense. A similar 1994 law, the Gun-Free Schools Act, requires states that receive federal funding for education to introduce zero-tolerance laws for students who bring guns to school. Some states have an exception for people with concealed carry permits, but these federal laws generally make schools completely free of firearms.

Though Trump claims he'll get rid of gun-free school zones on his first day in the Oval Office, that's not possible. A law that's already been approved by Congress and signed into law can't be signed away by a new president — that's just not how the federal government works. Either Trump doesn't realize the authoritative limitations of the presidency, or he doesn't know these laws exist.

Regardless, Trump's stance that students, teachers, and administrators should be allowed to have guns at school is a clear indication of how far he'll go to defend the Second Amendment. Whether the answer to America's current gun violence problem is more guns or stricter regulations for buying weapons is already a heated topic in the 2016 election, and Trump intends to go all the way to the right. Not only is he defending the GOP's general ideology that Americans need guns to protect themselves, he's also asserting that there should be guns in schools. In stark opposition to Democrats, Trump will defend guns in every scenario.