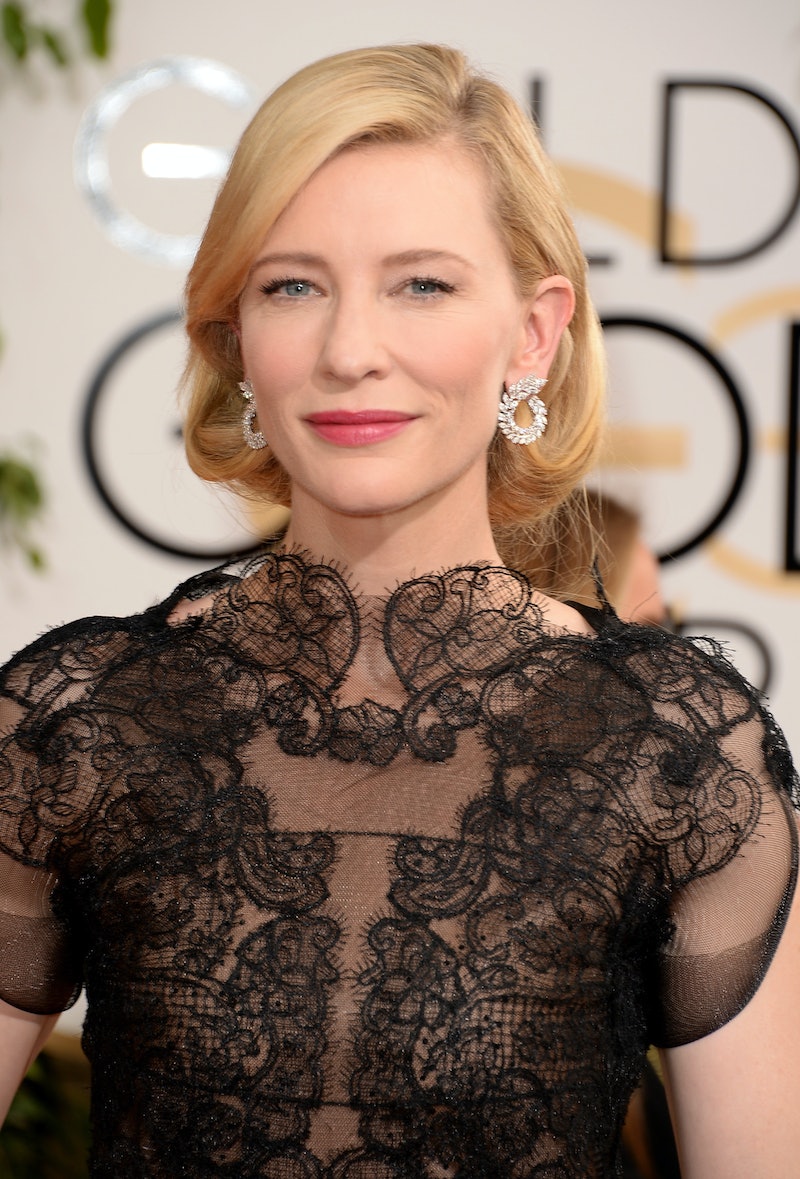 One of the most glamorous events of the year is just days away, but it looks like not everyone is super excited. According to her interview with Jimmy Kimmel, Cate Blanchett couldn't pee in her 2015 Golden Globes gown because it was too tight. So while you thought all the red carpet A-listers looked completely normal wearing their ultra-glamorous dresses, you were very wrong. I guess their acting skills come in handy, even on the red carpet!

Blanchett always looks absolutely flawless on the red carpet. Between her ability to try new silhouettes to her stunning use of color, Blanchett's red carpet style might be fabulous, but it's often not the most comfortable. During her chat with Kimmel on his late-night show, the actress compared the Golden Globes to a mosh pit and opened up about how uncomfortable dressing for awards shows can actually be.

"It's like a mosh pit actually; it gets very sweaty down there," Blanchett told Kimmel. "Normally you're so stitched into those dresses that you cannot drink anything because if you have to pee it's a disaster. It's so hard being an actress!"

She might have been half joking, but there's no denying that it really is that uncomfortable wearing tight dresses and having to look great in front of the cameras with all eyes on you. Her solution is simple, though — hire Kimmel as a stylist!

Kimmel suggested someone saying enough is enough and wearing "sneakers, big jeans, and a frumpy sweater," an idea Blanchett seemed to be on board with.

She sure did look gorgeous in that dress though.

I can't imagine having to wear something so uncomfortable for hours, but I'll definitely be thinking about that during this year's red carpet. Actresses have a knack for looking like they're completely at ease during events, but some of those dresses do look rather uncomfortable, albeit stunning.

Heigl walked the 2015 Golden Globes looking fabulous in a figure-hugging gown, but chances are comfort wasn't high on her list of emotions that night.

Even her toes seemed to be a little squished.

The Modern Family star looked absolutely gorgeous at the 2014 Golden Globes, but I have no idea how she moved around in this outfit.

This dress looks painted on, at least until it flares out at the waist.

Fey's gown in 2014 was classic in color, but it seems like it may have been difficult to move in.

The actress wore a lovely bustier-style gown, which looked incredible, but I'm willing to bet it wasn't the comfiest.

To be completely honest, I don't know how Alves moved at all in this all-black sequin gown.

Now that she mentions it, her Blanchett's 2015 Golden Globes dress does look a bit uncomfortable.

Having your entire left side covered in ruffles probably makes it hard to function normally.

There's a whole lot going on in this dress, and I don't even want to think about having to hold all those layers up in the bathroom.

I guess the Golden Globes isn't as fun as they make it look on TV!