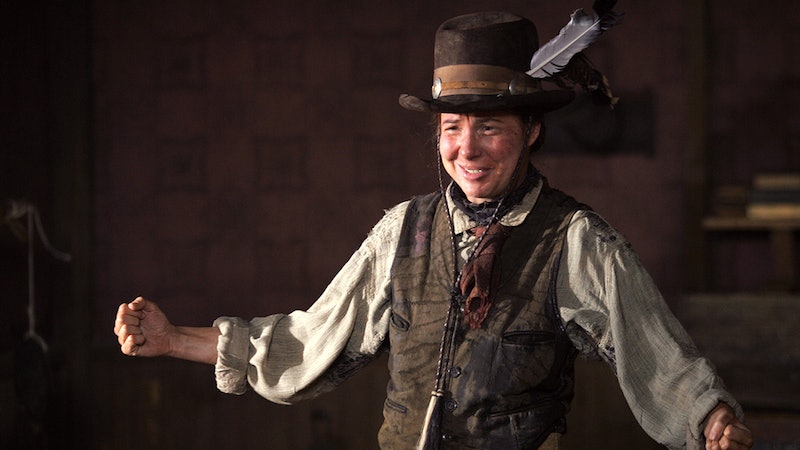 If you haven't heard the news, HBO just confirmed that a Deadwood movie is in the works. It's every story-junkie's dream to have a beloved series revived, and now it's actually happening.

Lasting only three seasons and ending inconclusively, Deadwood is easily one of the most acclaimed and most unfairly cancelled television shows out there. But now, with this news, it will only be a matter of time until we're reunited with the rambunctious town. From Bullock to Calamity Jane, we can only hypothesize which characters we're going to see in this new film, and what wonderful trouble they may stir up.

Of course you're going to rewatch the first three seasons over and over again, but I know you're also itching for something else to ease the Deadwood cravings. You'll find heaping helpings of the Wild West in these books, along with everything that makes Deadwood so captivating. Murder, revenge, attitude, danger and, of course, quests for gold and power. Maybe it's the Texan in my blood, but I love it when a book is humming with adventure, and you'll find just that here.

As you eagerly await the new movie, pour yourself a glass of whiskey and return to the gritty world of Deadwood with these sparkling gold reads.

No, the HBO series is not based on this book, but they both source from the same setting and history. Dexter won the National Book Award, so you know his writing is on point. Throw yourself back into the intense town of Deadwood, Dakota Territories in 1876. Legendary gunman Wild Bill Hickok and his friend Charlie Utter have just fled here, and the town (brimming with violence, sex, and liquor) may prove to be more than they had bargained for.

2. Searching for Calamity: The Life and Times of Calamity Jane by Linda Jucovy

This actual Deadwood resident will be a familiar face for any fan of the show. Calamity Jane was a badass, through and through, but perhaps not for the reasons you know her for. A poor, uneducated alcoholic, Jane wandered through Wyoming, Montana, and the Dakotas, telling wild tales about herself, self-inventing her own fame. In this riveting biography, Jucovy untangles the webs of myth around the true circumstances of Calamity Jane's life, revealing the real courage she exhibited in an era in which women where not given much agency.

Gold and murder are yet again co-conspirators in this page-turner. Eighteen-year-old Kate Thompson's father is murdered for a journal that reveals the location of a hidden gold mine, and so Kate disguises herself as a boy and goes on a quest for answers and vengeance. Awash in the city world of the West, Kate discovers that the truth may come at a higher cost.

4. The Sisters Brothers by Patrick deWitt

Shortlisted for the Man Booker Prize, this explosive novel will take you into the gritty West embodied by Deadwood. Under the orders of a man known only as the Commodore, brothers Eli and Charlie sisters are on a mission to kill Hermann Kermit Warm. As they hunt down their elusive prey, traveling from Oregon City to a mining claim outside Sacramento, they begin to question their job — both why they're doing it, and whom they're doing it for.

5. Fine Just the Way It Is by Annie Proulx

If you're not obsessed with Annie Proulx, get on it. A literary titan known for giving a clear and intricate portrait of the West (you may be familiar with her story "Brokeback Mountain," which is a force far greater than the movie, in my opinion), everything Proulx writes is amazing. This collection spans decades during and after the time-period of Deadwood, and features "Them Old Cowboy Songs," one of Proulx's more beloved stories.

6. Blood Meridian, or the Evening Redness in the West by Cormac McCarthy

Cormac McCarthy was practically made for this list. Blood Meridian is one of his most highly-regarded works, a book often described as completely unique, as it dives into the violence and inhumanity of the American West. Based on historical events at the Texas-Mexico border in the 1850s, this book follows a 14-year-old Tennessean who stumbles into a world of brutal Native American murders. Fair warning: This book is extremely violent.

7. The Whip by Karen Kondazian

Inspired by the real life of Charlotte "Charley" Parkhurst, a woman who lived out her life as a man in the West. A young Rhode Island woman falls in love with a runaway slave and has his child, only for her family to be destroyed. Disguising herself as a man, she ventures to the West to kill her family's murderer. But the adventures don't end there: She becomes a renowned stage coach driver for Wells Fargo, kills a famous outlaw, and has a secret love affair.

You may have seen the John Wayne or the Cohen Brothers adaptation of this hard-hitting Western classic. In Arkansas in the winter of the 1870's, 14-year-old Mattie Ross sets off to avenge her father. Partnering with one-eyed U.S. Marshall "Rooster," Ross must maneuver some of the hardest criminals in the West.

9. The Son by Philipp Meyer

An epic saga of blood and power, centered around one Texas family. Spanning the 19th and 20th centuries, The Son begins in 1849, with Eli McCullough, who at 13 is taken captive by Comanches and then years later abandoned. Torn between two worlds, Eli fights tooth and nail to carve a place in the world, seduced by the idea of power. The story is intertwined with those of Eli's son, Peter, and his great-granddaughter, JA, as they face the ultimate consequences of Eli's life and choices.