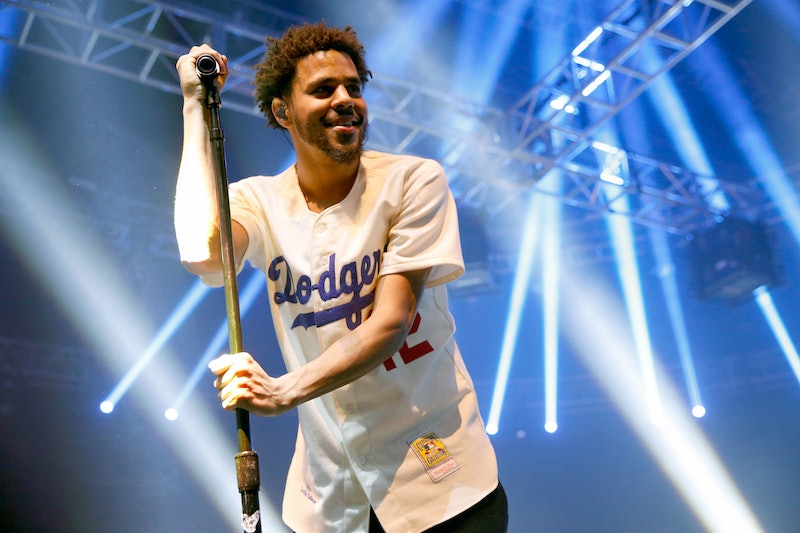 The important thing to understand about 2014 Forest Hills Drive is that it wasn't just "another rap album." Instead of focusing on exuberance and grandstanding for its content, J. Cole decided to tell the story of his journey from his childhood home in North Carolina to superstardom. This personal album was almost entirely produced, written, and performed solely by J. Cole himself, a rarity in the world of hip-hop where even perfectionists like Kanye West and Kendrick Lamar bring on a bevy of producers and featuring artists to shape the music. 2014 Forest Hills Drive also proved, without question, that J. Cole is one of the best lyricists working today.

Then reach the stars, you take the timeTo look behind and say, "Look where I cameLook how far I done came"They say that dreams come trueAnd when they do, that there's a beautiful thing

On the opening to the album, J. Cole drops a few quick lines that effectively serve as the thesis statement of the entire album. This album covers J. Cole's journey to the top, and now that he's there it's time to look back.

What's the price for a black man life?I check the toe tag, not one zero in sightI turn the TV on, not one hero in sightUnless he dribble or he fiddle with mics

J. Cole makes a pretty blunt, depressing statement about the state of the world in 2014. With all the death and mindless violence, Cole ponders why people are busy obsessing over athletes and rappers when attention needs to be paid to what's going on outside of the realm of celebrity.

J. Cole takes a moment to reminisce about some of his friends from his youth — celebrating that he is still here, because he very easily could've been hit by that stray instead of his friend.

It's common for rap music to discuss matters of sex – but it's rarely to talk about how not good someone is at sex. Instead of writing a song bragging about his skill with the ladies, J. Cole takes us back to the awkward, fearful child he was when he lost his virginity. It's a brave thing to write a song about in such an honest way, but it's also incredibly relatable.

You bout to go get a degree, I'ma be stuck with two choices:Either graduate to weight or selling number twoFor what? A hundred bucks or two a week?Do you think that you would know what to do if you was me?I got, four brothers, one mother that don't love usIf they ain't want us why the f*ck they never wore rubbers?

J. Cole shifts the perspective, briefly, to a friend of his talking to Cole about his dreams of going to college. J. Cole's friend is forced to deal drugs to support himself and his family, and is ensuring that J. Cole is aware that not everyone gets the same opprotunities to escape poverty that Cole is getting.

"A Tale Of Two Citiez"

Wanna know a funny thing about this sh*t?Even if you let em' kill your dream it'll haunt you n*****

J. Cole believes that you can set your dreams aside, or let other people tell you what you should do with your life, but nothing is going to keep you from wanting those dreams to come true.

J. Cole mentions some of his idols that I would like to become, but what's especially notable about these lyrics are the complex rhyming. Cole balances a few different sounds around and finds unique ways to arrange and repeat those sounds in just five lines. An impressive feat that marks the difference between just being a lyricist and being a rapper.

J. Cole points out that most rap music today is afraid to talk about love, or at least a healthy version of it. Love of others or (healthy) love of self is almost completely absent from a lot of music today, which Cole recognizes and hopes to fix.

I want a real love, dark skinned Aunt Viv loveThat Jada and that Will loveThat leave a toothbrush at your crib love

J. Cole's vision of a true, genuine love doesn't get more simple or understandable than the practice leaving a toothbrush at someone's house.

He may not have Adele's voice, but J. Cole's song called "Hello" about dialing up an old flame is just as emotional raw as the "Hello" that most people know. Here, J. Cole tries to break down his own defenses so that he can actually live his life — since we only get one of those, after all.

Reflecting on his career so far, J. Cole looks at the shallow success of some of his early hit singles and isn't satisfied with the fleeting nature of work without artistic substance.

J. Cole has seen success, and chased money and women. He tried to find happiness in everything that wasn't himself before looking inward, which is the only place you can truly find lasting happiness.

The ending moments of the album proper, J. Cole re-inforces the thesis of the album, his personal philosophy, and the theme of almost every song, poem, and story that has been constructed for as long as art has existed — Love will save us all.

J. Cole's personal odyssey is an experience unique to him, but the struggles of hoping to find success are universal. J. Cole's gone from the bottom to the top and 2014 Forest Hills Drive is a stellar account of what it means to discover one's self while everyone else is trying to shape you into something that you're not. His hometown return is sure to bring gasps, cheers and maybe a few tears when it premieres on HBO on Jan. 9.