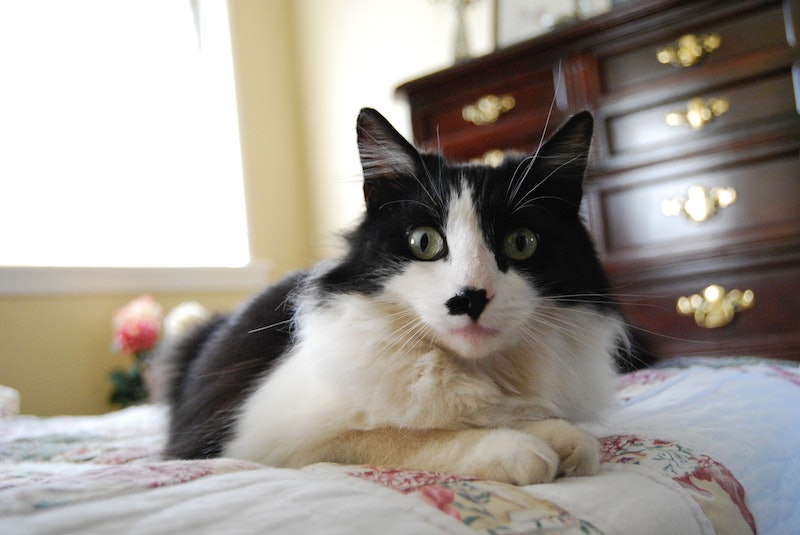 In the sphere of social media, the simple act of existing is enough to make certain felines famous — and such rings especially true for two-tone kitties, who are particularly prone to unique markings. You know the types — black-and-white cats whose interesting color combinations create the illusion of being two-faced, spotted, being decked out in formal wear, or mustachioed such that they resemble a certain German dictator. But have you ever wondered why "Hitler cats" look like... well, Hitler? According to a study published Dec. 6, black-and-white, or "piebald," cats can thank a faulty gene for the markings that have made them Internet sensations. For the record, I personally prefer comparing these cats to silent film star Charlie Chaplin; alas, though, the Internet has latched onto the more off-color likeness. There's even a website for it. Because of course there is.

So what, precisely, is the science behind the seemingly random coloring of these cats' coats? It all comes down to cell development in utero. When black-and-white cats are in the womb, their pigment cells fail to follow genetic instructions (the naughty little buggers). The specific gene to blame is called kit, and it reduces the rate of pigment cell multiplication. The result is too few pigment cells, which leads to white patches. This revelation was uncovered by scientists at the Universities of Bath and Edinburgh through research on mice, which they hoped to use to increase understanding of other major medical conditions in humans — such as holes in the heart — that are similarly caused by cell development in the womb.

So, in honor of these special-coated cats, here are a few other fun facts about the black-and-white wonders of the feline world:

1. They Could Be Prone To Wanderlust

It may be best to keep a close eye on your black-and-white kitty — these felines are more likely to wander away from home than cats of other coat colors, according to a Bavarian study done in 2010. Interesting. Perhaps that errant kit gene whose bee-bopping in the womb caused the bi-coloring in the first place translated into a penchant for straying.

2. They Tend To Go Down In History

Black-and-white cats' coats make them particularly memorable, which is perhaps why so many seem to rise to public prominence. A few examples of black-and-white celebri-kitties include Socks, the Clintons' White House cat; Lewis, a feisty piebald who made national headlines after being placed under house arrest for unwarranted attacks on people; Oscar, a wartime kitty who survived the sinking of three different ships; and Humphrey, "the Chief Mouser to the Cabinet Office" in the U.K. circa 1988.

3. They May Be Smarter Than The Average Cat

Although this has yet to be proven categorically true, owners of tuxedo cats (or TCs) swear that these bi-color cats are more aware of their surroundings and more perceptive than regular-coated cats. And apparently their smarts are contagious — TC owners insist that typical cats living under the same roof as TCs actually experience an increase in intelligence simply from being in the company of their TC siblings.