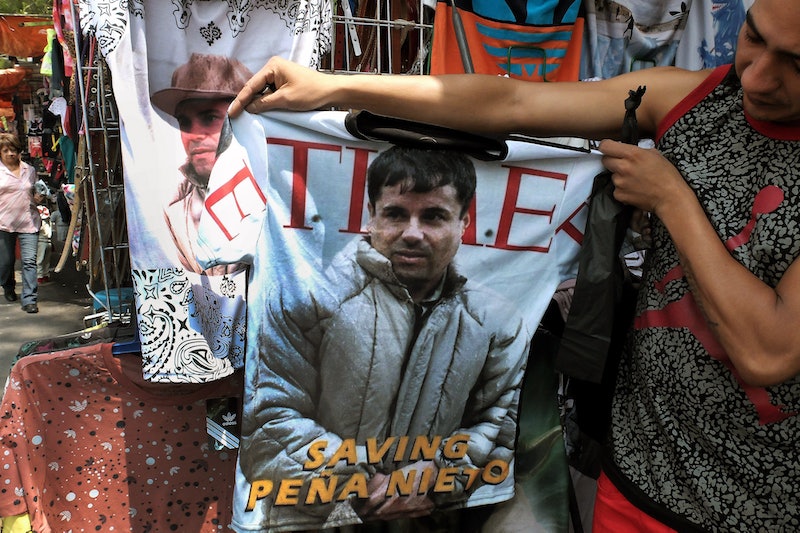 On Friday, Mexican President Enrique Peña Nieto announced that the notorious leader of the Sinaloa drug cartel, Joaquín "El Chapo" Guzman, was captured by Mexican authorities. "Mission accomplished: we have him," President Nieto tweeted. In a second tweet, he thanked his security cabinet "for this important accomplishment for the rule of law in Mexico." An official told CNBC anonymously that Guzman was apprehended following a shootout with Mexican marines in Los Mochis, in Guzman's home state of Sinaloa in western Mexico. Five people were reportedly killed, none of them law enforcement officers, and one marine was injured.

The drug kingpin escaped from maximum security prison in July — the second time he's done so — through a tunnel in the prison shower. His escape caused the world to criticize Mexico for its inability to keep such an infamous criminal locked up. Though a massive manhunt was underway immediately, it took the Mexican authorities almost six months to capture Guzman. "This represents, without a doubt, an affront to the Mexican state, but also I am confident that the institutions of the Mexican state, particularly those in charge of public safety, are at the level, with the strength and determination, to recapture this criminal," President Nieto told CNN in July, and now they have.

Back in 2001, Guzman reportedly escaped from maximum-security prison the first time, reportedly by hiding in a laundry cart. He was on the run until 2014, when he was recaptured and put back behind bars. So, the problem was all too familiar when it happened again in July.

The U.S. Justice Department described Guzman as "one of the world's most prolific, violent, and powerful drug cartels" before his arrest in 2014. American officials wanted Guzman extradited to the United States to face multiple indictments for his role in Sinaloa drug trafficking when he was recaptured, and were angry when he escaped the second time. "This is exactly why we argued for his extradition," an unnamed U.S. law enforcement official told CNN in July, adding that the escape shows "the strength of the cartel and his ability to pay people off. If this guy can get out of prison it shows how deep the corruption is there."

The U.S. Drug Enforcement Administration tweeted Friday that it was "extremely pleased" that Guzman was captured. The agency tweeted: "We congratulate the MX Government and salute the bravery involved in his capture."

It's unclear what measures will be taken to ensure that Guzman doesn't escape a third time, potentially bringing further embarrassment to the Mexican government.