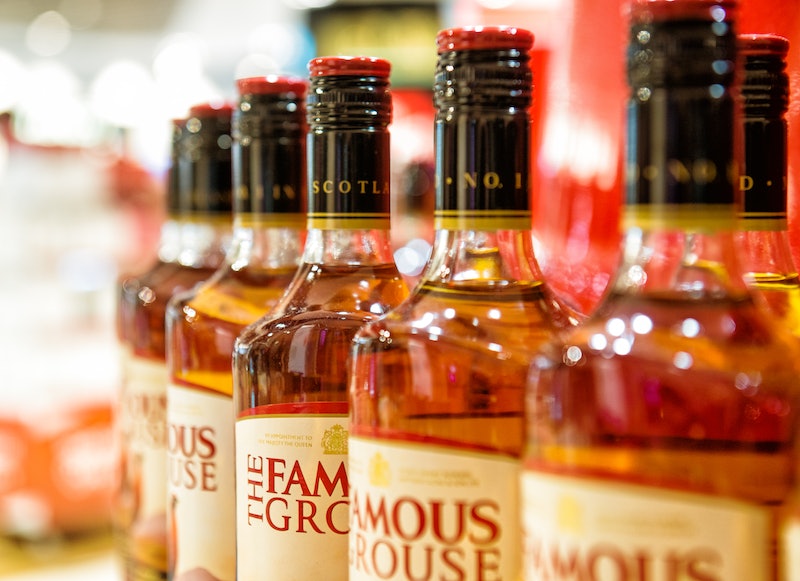 Most of us already know the dangers of putting too much alcohol in our bodies, and the same can be said about too much alcohol in our skin and hair routine. Being the bourbon-guzzling-lady that I am, I can't deny myself a little bourbon in my skincare especially since I'm a bourbon-guzzling lady who also happens to have pretty oily skin. Whiskey can be a great substitute for witch hazel or other astringent alcohols that can be overly drying. While it certainly is more pricy than a bottle of rubbing alcohol, you can enjoy the left-overs in a tasty hot toddy.

Whiskey is a grain alcohol that comes in many flavors as its distilled using barley, rye, wheat, or corn. Although scientific studies on the skin benefits of whiskey are sparse, anecdotal evidence suggests that it could bring down the inflammation of blemishes and control excess oil. Since whiskey is an alcohol, it has strong antiseptic properties that can cleanse the skin by removing bacteria and dirt. However, because of those antiseptic properties, using whiskey with the right combination of ingredients is key to avoid irritation. Basically, using whiskey in skincare is just like using whiskey to get your buzz on: Moderation is the key to success.

I have a few tricks up myself for relieving wrinkles and pimples with my favorite spirit that are super easy and incredibly fun — just like my favorite cocktails.

One of my favorite toners to make is for a friend of mine who has the oiliest skin and loves himself a nice whiskey. To get started, I use a sliver of an aloe leaf, some rosewater, and a teaspoon of bourbon. Blend your toner together, and add your favorite essential oils.

For years, I abused my bikini line by shaving and meticulously plucking ingrown hairs. To solve the problem of scarring and recurrent ingrowns, I have given up on shaving... which just means I have fewer outbreaks. So, I made an "aftershave" of lemon juice, tamanu oil, bourbon, and marshmallow tea to heal the scars left by my past self. So far, I've noticed zero irritation (if you are a shaver, you may want to test it out on a small patch of skin first) and — maybe it's wishful thinking — but I swear my scars are getting lighter.

I've delved into oil cleansing many times, but it's never been the miracle for me that other acne-prone folks have claimed it to be. Recently, it occurred to me that perhaps a tiny amount of bourbon in my oil-based routines may help from clogging my pores. I added a teaspoon of bourbon to one part grapeseed and one part jojoba oil (both lightweight oils) and guess what? My face didn't break out instantly. Of course, adding alcohol to oil cleansing may defeat the purpose of oil cleansing all-together, but if you've noticed complexion changes like I have and want to keep trying it without the clogging issue, why not try adding some whiskey to the mix?

Alcohol in general can be extremely drying to your face, when used in moderation it can ease pimples and control oil, do a test patch before you incorporate bourbon into your skin care routine.