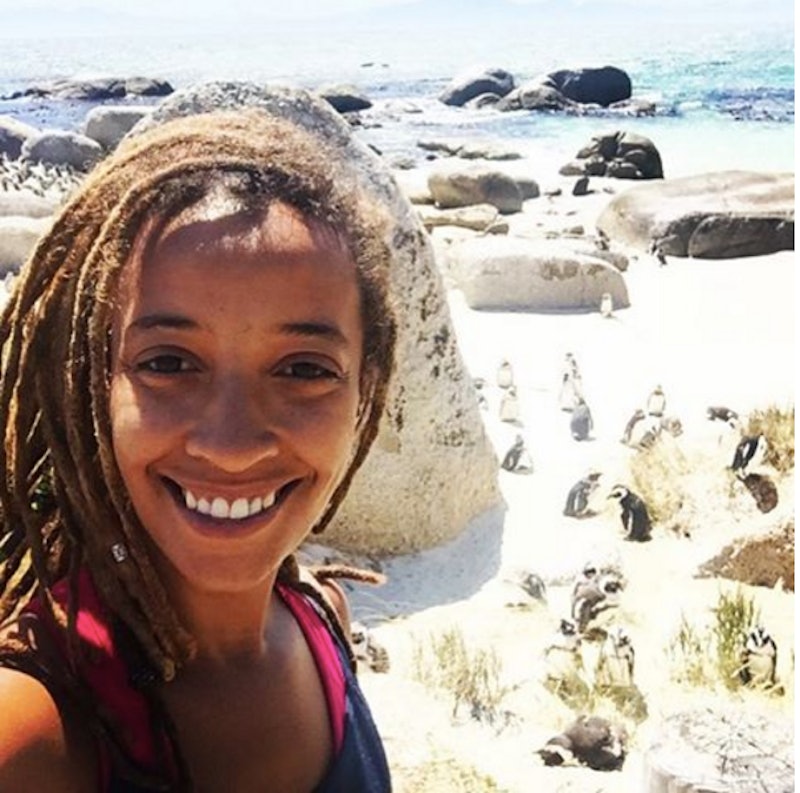 Amber Amour, the activist behind the Creating Consent Culture and Stop Rape, Educate campaigns, shared the details of her alleged sexual assault on Instagram, as well as several posts detailing the aftermath, such as her experience getting a rape kit done in South Africa, where the alleged assault took place. Amour, who was in South Africa as part of her Stop Rape, Educate campaign, says she was sexually assaulted in the shower of a hostel. Though it took over a month, Amour says her alleged attacker was arrested and later released on bail for the equivalent of $75. Now, Amour is focusing on herself and her healing process through acts of self-care, as well as her efforts to share her story and raise awareness for the overwhelming issue of sexual violence against women.

Amour's story has made a major splash in the media, and that's a really great thing: Her story is incredibly open, honest, and raw, fighting back against a culture in which sexual assault survivors are so often silenced. After reading her story, I reached out to her for an interview, and she graciously agreed to talk to me about her harrowing experience (as well as her healing process), her history of activism, and her feminist goals for 2016.

Amour, who recently celebrated her 27th birthday, has a long history of activism. Dating back to the age of 12, when her mother took her to protest against the Iraq War, Amour has been passionate about social change and standing up for what she believes in. For example, as an adult, Amour worked for the Human Rights Campaign helping pass same-sex marriage in New Jersey, Delaware, and Rhode Island.

Since then, Amour began the Stop Rape, Educate campaign, which aims to teach and heal the world through peace, love, and education. What prompted the movement? An alleged experience with sexual violence in 2014, and frustration with a system that was ill equipped to help. She turned to activism in the aftermath, and with a world tour aiming to educate about consent and end sexual violence, she is already making a huge impact.

When asked about the response she's gotten on social media, Amour says, "My original followers, before the rape, are mostly supportive" — but, unfortunately, not everyone has offered her the support which is so beneficial to survivors of sexual assault. Amour explains that people have called her names ranging from slut to attention whore to fraud. For Amour, it's sometimes "heartbreaking" when followers of hers have questioned the validity of her experience, as she talks "so much about supporting survivors and [has] supported so many of them." Scrolling her Instagram comments is definitely not for the faint of heart, as some commenters are absolutely brutal with their questions and judgments.

On the flip side, Amour says that she's received "hundreds of messages of support," as well as the support of her mom, who, in her words, "keeps her balanced."

In spite of her horrific experience, and the negativity she's received in response to sharing her story, Amour maintains a positive attitude, which is truly an inspiration, sharing, for example:

In terms of her work to end sexual violence, Amour is shifting her mission from the Stop Rape, Educate campaign to Creating Consent Culture. How come? Amour tells me she wants to be "more intentional with the words [she] uses because they hold so much power," which makes sense as a reason to hone in her focus on building consent culture through education and outreach.

Amour, who identifies as a feminist, sees feminism as "love, respect, acceptance, and peace for people who identify as women around the world" and notes that "true feminism is intersectional." Amour hopes to make "consent culture" more mainstream in the coming year. She plans to continue offering support to other sexual assault survivors, as well. She's also hoping to publish a memoir discussing her experiences with sexual assault.

In the short term, she's also focusing on self-care and healing after her assault. Amour shares that what works best for her comes down to "connecting with nature," as well as plenty of yoga, meditation, modeling, and dance. While her large-scale efforts in activism have been amazing, Amour also sets an excellent example by being so open about her healing process, as self-care after sexual assault can be extremely challenging for survivors. Amour's experience with sexual assault is truly bone-chilling, and something I'd wish upon no one, but her bravery in sharing her story is definitely an inspiration.