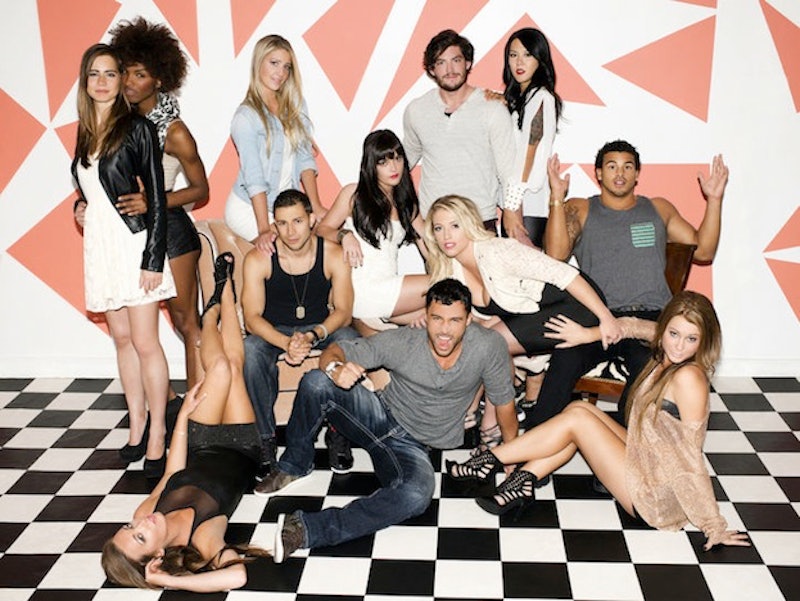 Since 1992, The Real World has told us the story of seven strangers picked to live in a house, et cetera, et cetera, et cetera. We know it, we love it, we’re comfortable with it. However, in the year of 2014, MTV threw a stick of dynamite at the format and let the uncomfortable, awkward chips fall as they may. Real World: Ex-Plosion , the 29th season of the MTV reality show, promises the traditional situation (seven strangers) with the added bonus/surprise/Shyamalan twist of the seven strangers’ exes added to the house after 30 days. We viewers have yet to see how the ex-plosion plays out, but the season thus far has been a fun, jam-packed blast.

This week, I had the pleasure of speaking with Real World: Ex-Plosion cast members Jamie Larson and Arielle Scott. The general takeaway from the two conversations? As dramatic and tumultuous as The Real World: Ex-Plosion might have been, it was a positive, worthwhile experience. Yes, they enjoyed it despite the crashing of the exes, and these two might be masters of making lemons into lemonade. Furthermore, Larson stood by the new format: “I know a lot of the original fans were very skeptical, but change isn’t always a bad thing,” she told me in a phone interview. When asked about the producers being featured on camera in each episode (another alteration!), Larson said, “I love it because it gives the fans a look behind-the-scenes and they get a little taste of what we deal with.”

“I’m not sure what [the network has] decided, if they’re going to keep going with The Real World or if we’re the last season,” Larson went on. “But I think if we are the last season, [the behind-the-scenes element is] kind of a good thing for the fans to see before it all ends.”

Um, let it be known that I would be devastated if the series ended. May it go on for forever.

The former roommates also spoke honestly about why they auditioned for the show, the so-called ex-plosion, and what it’s like being on a reality show. And yes, we definitely discussed Burgergate. Let's break it down.

Auditioning for The Real World

Unless you live in a sea cave or something, you know what to expect if you go on The Real World: You will share a house with a group of crazy people. You will eat Subway. You will hang out in the jacuzzi. You will drink copious amounts of alcohol. All of your shenanigans will be caught on camera. For me, that sounds equal parts stressful and thrilling but Larson and Scott? They are laid-back, confident, and rational. Larson said she doesn't regret anything she did on the show, which, oh my god. Not saying I think she should regret anything she did, but I just I know I'd regret everything I did on the show. No matter what. Even if it was like, accidentally chewing with my mouth open in front of the cameras.

“I really did it as a joke, I wasn’t planning on getting on the show,” Scott replied when asked why she auditioned. “It would be funny if I got picked.” It looks like that nonchalant approach worked in her favor. As chill as her demeanor may seem, she said she’s always been a hardworking “go-getter,” and she saw the show as an opportunity to let loose. Her mom supported the decision, telling her that she “need[s] to take some time to be a young person.”

And Larson? She thought the show could be just the change of pace she was looking for: “I was bored. I live a very high-volume lifestyle on a regular basis, and I was just bored with life pretty much,” Larson explained. “So I just needed something different.”

We Need To Talk About Burgergate

One of the biggest moments from the first episode of the season was when roommate Ashley Mitchell drunkenly tossed the contents of a skillet at Scott. Though the hot oil and burgers didn’t hit Scott in the face, the sheer act was so violent and bizarre. Scott didn't freak out, though. Instead, she told Mitchell they'd talk about what Mitchell did the next morning. And they did. And they resolved things. It was unlike anything I'd ever seen on a reality show.

And Scott was as impressed with her calm reaction as we viewers were: “I watched the episode and I was like, 'shit. That is one patient person.'” Because Mitchell was hammered, Scott realized confronting her right then and there would probably aggravate the situation. Viewers and friends alike have expressed shock that she didn’t snap at Mitchell: “People are like, ‘You’re on a reality show, you’re supposed to react like this, this, and that.’ And I’m like, really? Because I thought reality was supposed to be real,” she told me. “I’m proud of how I handled it.”

Let's get to what everyone wants to know: Did the roommates detect the ex-plosion before it happened?

“Honestly? No. I had something in the back of my mind while we were on our boating trip,” said Larson. Her spidey sense must've been tingling, because when they returned to the house after that very boating trip, the ex-plosion went into effect.

“[While we were on the boating trip] I was like, ‘There’s something not right here. We still haven’t gotten a new roommate [to replace an original roommate who left the show]. We all love each other way too much, [the producers are] gonna mess this up somehow, they have to stir the pot a little. I knew something extreme was going to happen, but I didn’t guess that harsh.”

“Around [the time right before the ex-plosion], everyone started guessing [as to how things could change in the house],” said Scott. “I remember Jamie said, ‘It would be really funny if, because everybody’s been kinda talking about their ex, if [the producers] brought in one person’s ex [as the new roommate].’ And everybody was like, ‘This is seven strangers picked to live in a house. What are you talking about? Moving on!’”

When she (and the rest of the roommates) returned from their trip, they were greeted by an unexpected group. Initially, Scott didn't realize they were the exes, and she assumed these "strangers" were there to nab their spots in the house. “I was like, ‘Okay, so we’re being replaced. There’s a whole new cast here,’” she recalled. “‘That’s the twist of the season. They’re kicking us out. We’re not interesting enough.’ … And then, we recognized the people.”

“I think [the original cast] was really, really upset because it was our show,” explained Scott. “And now it was us plus those people we thought we left behind.” I. Can't. Wait.

Exes Be Damned, They Had a Good Time

As much as The ex-plosion might've complicated their personal lives and wasn't the ideal situation to be thrown into, do either of them regret doing The Real World? Not at all. Larson did say the arrival of the exes was "annoying," but that she would "absolutely" do the show again.

“I made the best relationships with life-long friends that I’m going to have forever, you know?” Larson said. “It would suck not to have the people from this show in my life anymore.” That's sweet, but we'll see how long that lasts.

What about Scott? “Yeah, I’d do it again. But if I had the option to do it with or without Ashley and [Ceasar, my ex], I’d probably do it without Ashley,” Scott admitted. Fair. Can you really fault any of them for not wanting their exes there? “She’s a great girl, though," she added.

This just in: People on the Internet can be mean. While the original Real World cast didn't have to worry about snarky and cruel web comments (woot, 1992!), Real Worlders of today aren't as fortunate. Scott and Larson told me that strangers aren’t afraid to tear the cast a new one via Twitter and other social media outlets ("the Internet gives everybody so much balls, it's crazy," remarked Scott), and while they do their best to ignore it, the remarks can sting.

“Remember that we’re people ... We all gave 100 percent when we were in there, in the most vulnerable, most raw way possible,” Scott said. “It’s so easy to [watch the show and] be like, ‘That’s fake, that person’s fake.’ It’s like, okay, first of all, you’re in a room where you don’t know anybody and you have cameras following you and you’re constantly thinking about, ‘if I do this, how does it look?’ It’s hard. It’s really, really difficult. And sometimes, people say really, really hurtful shit online and it pisses me off … Remember, we are people who love, we laugh, and we shit, we do all of this other real stuff, but we do it on a grander scale.”

And though the roommates may butt heads throughout the season, Scott has nothing but love for the cast: “I just really wish more people would take the time to really, really see why we are the people that we are,” said Scott. “Even if I don’t get along with all of those people, my roommates are some of the most interesting people I’ve ever met. Period.”

Larson said the only roommate she continues to have "bad blood" with is Mitchell. Even so, she said she managed to be civil with Mitchell while they were living together.

Larson also touched on the "always being aware of the cameras" factor.

“Literally every move you make, a producer has to be informed. And you constantly have to be miked until you’re for sure going to bed,” Larson explained. “It’s just hard because you have to understand people are going to be listening to every word you say, and even when you’re not miked, they can still hear you. It’s hard to forget to watch what you say.”

“Obviously, this season is working because we’re getting a lot of love and support for it, and I appreciate the love and support everyone is giving us. Even the haters who don’t like me,” Larson laughed.

“Hey! Thank you for having your name in my mouth,” she said.