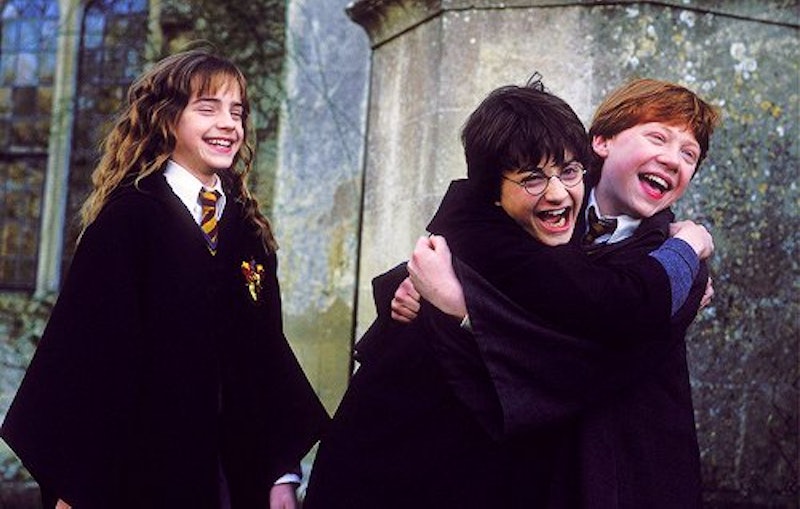 Part of the magic of growing up with Harry Potter was getting to hang out with all of our friends at Hogwarts. At least, the characters felt like our friends, and every book was another chance to sit by the fire in the Gryffindor common room and talk about how to defeat Voldemort with our fictional BFFs. We'd go down to Hogsmeade with them, eat treacle tart in the Great Hall with them, complain about homework from Snape with them (although seriously, 12 inches of parchment is only like one page, those kids had it pretty easy) — it all felt so real!

Even when the Golden Trio weren't speaking to each other, we knew that they would be friends again by the end of the book. Ron would stop being a jealous brat, or Hermione would stop freaking out over Lavender, or Harry would have to fight a dragon or something and his friends would all have to forgive each other because there were bigger things to deal with. Even beyond the main three, there were some stellar friendships going on with the side characters: the twins and Lee Jordan, Seamus and Dean, Parvati and Lavender, Luna and Neville (who TOTALLY should have ended up together, but I digress). So if you need an extra dose of those warm and fuzzy Harry Potter friendship feelings, check out some of these choice Harry Potter quotes about friendship:

3. There are some things you can't share without ending up liking each other, and knocking out a twelve-foot mountain troll is one of them.

4. “You could say sorry," suggested Harry bluntly. "What, and get attacked by another flock of canaries?" muttered Ron."What did you have to imitate her for?""She laughed at my mustache!""So did I, it was the stupidest thing I've ever seen.”

6. “Sometimes you remind me a lot of James. He called it my 'furry little problem' in company. Many people were under the impression that I owned a badly behaved rabbit.”

"I'm not as good as you," said Harry, very embarrassed, as she let go of him."Me!" said Hermione. "Books! And cleverness! There are more important things — friendship and bravery and — oh Harry — be careful!”

8. “I enjoyed the meetings, too. It was like having friends.”

9. "THEN YOU SHOULD HAVE DIED!" roared Black. "DIED RATHER THAN BETRAY YOUR FRIENDS, AS WE WOULD HAVE DONE FOR YOU!”

― J.K. Rowling, Harry Potter and the Prisoner of Azkaban

10. Luna had decorated her bedroom ceiling with five beautifully painted faces: Harry, Ron, Hermione, Ginny, and Neville. They were not moving as the portraits at Hogwarts moved, but there was a certain magic about them all the same: Harry thought they breathed. What appeared to be fine golden chains wove around the pictures, linking them together, but after examining them for a minute or so, Harry realized that the chains were actually one word, repeated a thousand times in golden ink: friends. . . friends . . . friends . . .

11. “You think I'm a fool?" demanded Harry."No, I think you're like James," said Lupin, "who would have regarded it as the height of dishonor to mistrust his friends.”

12. “Nobody's ever asked me to a party before, as a friend. Is that why you dyed your eyebrow, for the party? Should I do mine too?”

13. “Go on, have a pasty," said Harry, who had never had anything to share before or, indeed, anyone to share it with. It was a nice feeling, sitting there with Ron, eating their way through all Harry's pasties, cakes, and candies (the sandwiches lay forgotten).”

14. "You're the one who is weak. You will never know love or friendship. And I feel sorry for you."

16. “Ron," said Hermione in a dignified voice, "you are the most insensitive wart I have ever had the misfortune to meet.”

18. “I believe your friends Misters Fred and George Weasley were responsible for trying to send you a toilet seat. No doubt they thought it would amuse you.”