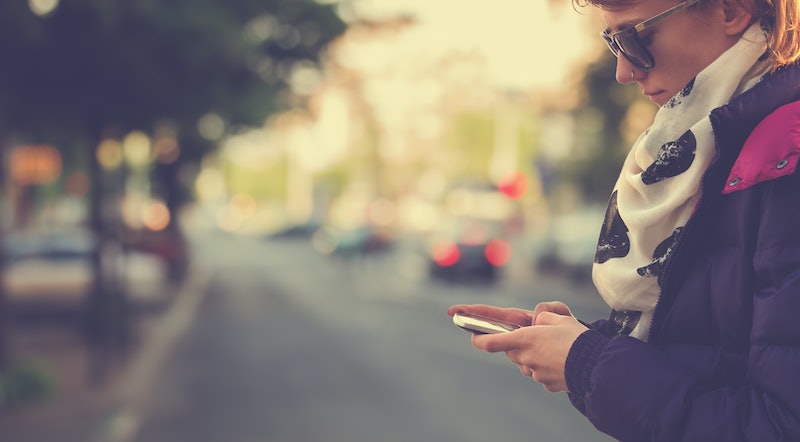 It's happened to the best of us: You’re walking down the street when suddenly you trip on the curb or accidentally crash into the person in front of you, all because your head's bent down to the all-consuming glow of the screen. Now, a new study shows that people who text or read from their phones while walking are less likely to keep their balance and are more vulnerable to hazards on the sidewalk. Shocking, right?

Even if you're a self-proclaimed multitasking champion, it's better you don't text while walking. Researchers studied the gaits and movements of 26 individuals using a 3D movement analysis system. Participants wore reflective patches on their heads, torso, heels, and pelvis during the experiment and were asked to walk a distance three times: once while reading a text, once while writing a text, and another instance without a phone. Healthy pedestrians who scroll and type are more likely to swerve, move stiffly, and walk slowly. (They needed an experiment to prove this.)

Still, the researchers at Australia's University of Queensland say their report is the first to study how texting impacts the user's motion. At least a third of participants admitted to previous incidents of bumping into objects while on their phones. (Let's add this to the growing number of sleep-texters and what texting can do to relationships.)

Though the individuals spent an average of 30 minutes a day texting, they still weren't able to walk normally while attached to their cellphones. Siobhan Straub, lead researcher and co-author of the study, says the risk is greater when texting as opposed to just reading something from the screen. Your head doesn't stay as still as it needs to be, moving to keep your eyes on the task at hand. This can cause a delay, making it harder for you to react.

No one is immune. Last month, a tourist walked off the edge of a pier in Australia while checking Facebook. Another man in Washington, so absorbed by his phone, fell from a train platform onto the tracks.

Maybe it's a just quick glance through your Instagram feed or you're sending a late text for a meeting, but there's a good chance you miss that street lamp on the corner and end up with your coffee down the front of your shirt. I myself have fallen down a flight of stairs while texting. Not my best moment, I know. Just don't be this person: