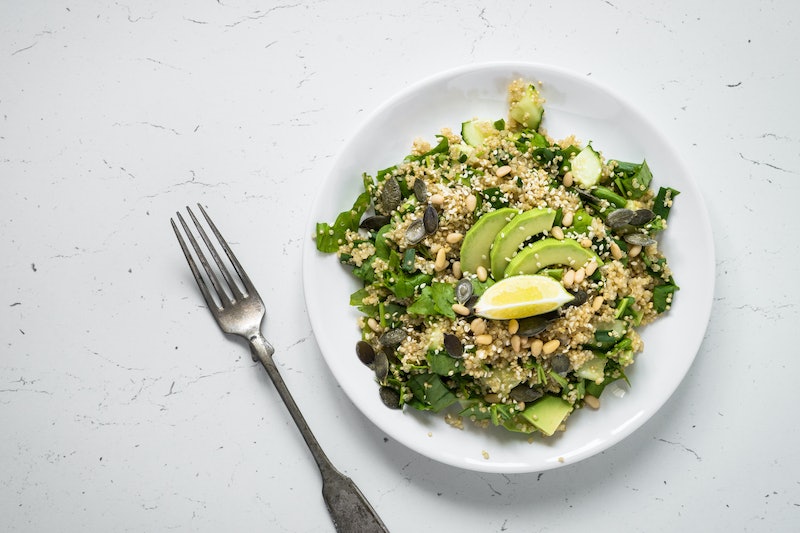 Quinoa is one of those foods that can be delicious, or it can turn out bland and boring. If you've only experienced the latter, you need to keep reading to find out how to make quinoa taste better, because seriously, you're missing out.

Quinoa has been around forever, but it wasn't until fairly recently that it gained a lot of popularity for being a majorly healthy superfood. Quinoa is a superfood superstar: it's high in protein, fiber, vitamins, and nutrients, as well as being gluten-free and easy to digest. All of these healthier than thou qualities end up making it a turn-off for some people — they assume that because it's so good for you, it can't possibly taste good too. And while it is totally possible for quinoa to feel uninspired, it's also very possible to make it taste amazing.

As someone who has trouble digesting brown rice, hates white rice, and is allergic to barley, quinoa has been something of a godsend. I am obsessed with quinoa and make it constantly. Like most people, I began my quinoa journey by simply subbing it into brown rice dishes. It was good, but it wasn't incredible. So, I searched and asked around for tips, experimented, and ended up finding some truly mouthwatering ways to prepare quinoa. I'm here to tell you that if you haven't been thrilled with this grain, you're probably preparing it incorrectly. Read on for these 17 easy ways to make your quinoa taste better. And then get cooking!

1. Cook It In Vegetable or Chicken Broth

Quinoa on its own can be very bland (just like any other grain). If you'd like to add a bit more flavor, cook it in vegetable or chicken broth instead of water (or do half and half). This instantly gives your quinoa more flavor and doesn't require you to do any extra work.

Another way to easily and quickly make quinoa taste better without cooking anything else is to add herbs and spices. I personally love adding thyme, salt, and pepper to my quinoa, but you can add whatever you want — basil, oregano, maybe even some red pepper. Food Network star and chef Giada de Laurentiis has a recipe for herbed quinoa that is fresh and tasty.

3. Toast It In Oil Before Boiling

To make quinoa, you mix it with water, bring to a boil, then let simmer until it's done. But to make it extra delicious, toast the quinoa in olive oil first. Add a tablespoon (or more) of olive oil to the pot on medium heat, then add the quinoa. Let it toast until the quinoa browns but doesn't burn (usually about two to three minutes), then add water. It really makes a big difference. According to I Heart Keenwah, "Pre-toasting quinoa before you cook it is the single most import way to enhance the flavor of the seed."

4. Add Tiny Chopped Up Pieces Of Garlic And Onion

As an Italian, one of my favorite ways to add flavor to anything is to add a whole bunch of garlic. Quinoa is no exception. Roast or sauté minced garlic, and then add it to your quinoa once it's finished. You could also sauté some chopped up onions if you're into that kind of flavor as well. This recipe from Food.com shows you exactly how much to add to make it taste the best.

Savory quinoa with vegetables and a protein is a terrific dinner option. But sweet quinoa for breakfast? It might be better. Love and Lemons has this wonderful quinoa breakfast bowl recipe that is so easy to make and super versatile. Use the recipe as a base, then add whatever fruit and toppings you want. I think I might like it better than regular oats, personally.

The trick to making almost any food in the world taste better is to add cheese, and quinoa is obviously no exception. This creamy caprese quinoa bake from Half-Baked Harvest is the perfect way to add cheese, and make your quinoa beyond amazing. After something like this, you'll never see quinoa the same way again.

When most people think of quinoa, they think of it as a boring, healthy side dish with some veggies. But as this list proves, you can do a lot more with it than you think. This recipe from Half-Baked Harvest is another example, as it mixes quinoa with panko breadcrumbs to create an awesome zucchini and eggplant parmesan dish.

8. Use It In Vegetarian Chili

As someone who doesn't eat meat, I can tell you that finding a satisfying meat-free chili recipe can be difficult. But I've found that adding quinoa can make a huge difference. It makes your chili more hearty without making it taste too much like a grain, you know? This vegan and gluten-free recipe from Making Thyme For Health just might convert you to a meatless existence.

9. Cook It With Less Water

Look at any quinoa box, and you'll see that the directions say to make it with one part quinoa, two parts water (so, one cup of quinoa and two cups of water). But The Kitchn makes a compelling argument for using less water — less water makes quinoa less mushy, and more light. If you've found that you dislike quinoa because it's too much like mush, this might be what you need to do.

10. Make It Into Quinoa Pudding

Maybe you want your quinoa to be more like a dessert than just a boring grain. OK! Similar to quinoa oatmeal is quinoa pudding. This delicious recipe from Half-Baked Harvest calls for you to make your quinoa slowly with coconut milk, various sugar, and fruit for a very unexpected treat. It's a great breakfast or a satisfying snack.

Looking for something with more of a kick? This recipe from Good Life Eats is perfect. Add cilantro and roasted poblano peppers to your quinoa for a little bit of heat. It's easy and delicious, and makes a great side dish. It can also be mixed with veggies and a protein for a spicy quinoa bowl.

12. Bake It Into Muffins

I know it sounds beyond weird to add quinoa to baked goods, but trust me, this recipe is not weird. Half-Baked Harvest gives us these sweet potato, quinoa, and dark chocolate coconut crumble crunch muffins that you absolutely need to try. They're filling and satisfying, so they're ideal for basically anyone.

13. Use Quinoa In Homemade Veggie Burgers

Making your own veggie burgers isn't as hard as you might think, especially when you have an ingredient like quinoa, which is hearty and holds things together easily. These black bean quinoa burgers from Love and Lemons will become your new favorite. Top them with your favorite burger toppings and a toasted bun, and you're good to go.

14. Use Quinoa In Homemade Granola

In case you haven't caught on yet, quinoa makes for great breakfast food. If you're not into mushy grains, then try this granola recipe from Naturally Ella. It's baked with almonds and maple syrup for a sweet, crunchy finish that is perfect on top of yogurt. The trick is toasting the quinoa instead of boiling it - it keeps it crunchy.

Quinoa is probably my favorite grain to add to soups. It's filling and makes soups more hearty without taking over or soaking up all of the broth. Some grains, like barley or farro, are so needy and demand all of the attention when you're eating a soup. But quinoa is less obvious and goes well with almost anything. Try this quinoa tortilla soup recipe from Making Thyme For Health, which, bonus, can be made in a slow cooker.

As strange as it may sound, a lot of people swear by sprouting their quinoa. This basically means letting it sit in water overnight until it forms little sprouts. According to Making Thyme For Health, this helps reduce the amount of "phytic acid (or phytates) which is thought to block the absorption of important minerals as well as reduce the digestibility of starches, protein, and fat." It essentially makes your quinoa even more of a healthy superfood, and can also make it taste better.

A touch of sweetness is always a good way to make something taste better. This simple recipe from Good Life Eats mixes quinoa with coconut oil and coconut milk for a sweet and savory side dish. You'll enjoy it so much that you probably won't even need to add anything else to it.