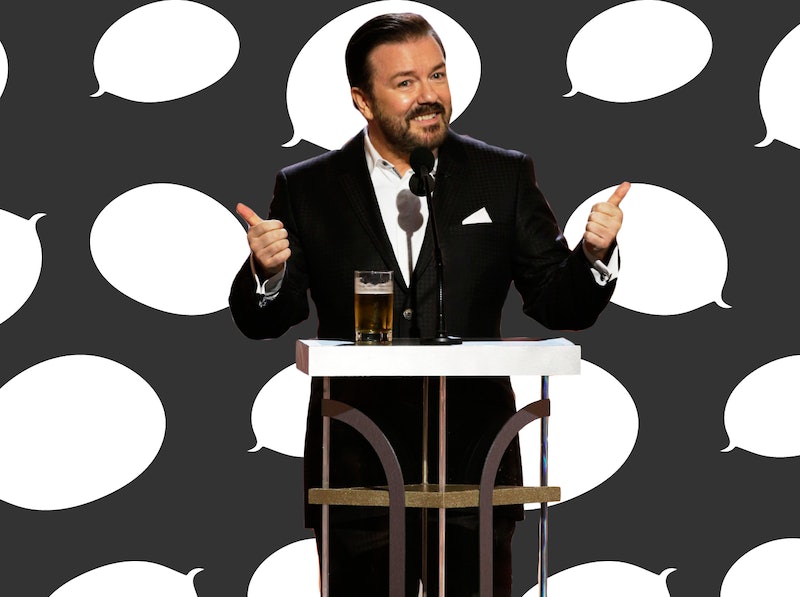 Going into the Golden Globes this year I had one question on my mind: Would this be the year Leonardo DiCaprio finally won an Oscar? I know, I know. This isn't even the right award show, but how can you not think about it?? So exciting! Anyway, another question I'm sure many of you had on your minds (somewhere behind the part of your brain where you store Leo information) was how Ricky Gervais' 2016 Golden Globes monologue would go. The comedian's brand of insult comedy is somewhat controversial. Would he go too far and make the precious celebrities feel awkward and annoy the viewers at home who don't want to see Meryl treated like that! Or would he go waaaaay too far and actually offend? Those were the only options/I thought those were the only options.

This was Gervais' fourth time hosting the Globes (he also hosted in 2010, 2011, and 2012). Leading up to this year's Globes he told the Today show about his fourth time hosting "I'm never trying to undermine the moral fabric of America. I'd rather people laugh than gasp. But if they gasp that's good too." See, he doesn't want to undermine any fabric! He just wants to make us laugh. That said, he also tweeted after he was announced as host: "Because I can see the future, I'd like to apologise now for the things I said at next week's Golden Globes. I was drunk & didn't give a f*ck." So, how did things actually go?

Gervais took the stage with a pint of beer ready at the podium and started off with this:

Shush. Shut up. You disgusting pill popping sexual deviant scum. I'm going to do this monologue and then go into hiding. Not even Sean Penn will find me. Snitch.

Yep, "drunk and didn't give a f*ck" seemed to be the route he was going with out of the gate.

The monologue then delved into jokes about Caitlyn Jenner ("She didn't do a lot for women drivers, but you can't have everything"), jokes about Jeffrey Tambor playing a transgender woman on Transparent, and jokes about Roman Polanski thinking Spotlight is the "best date movie ever." There were also jokes about the wage gap in Hollywood. "Of course women should be paid the same as men," Gervais said, "And I'm making the same amount as Tina and Amy did last year."

Whether you think that Gervais was pointing out issues of our time using comedy (this could be said for the Tina and Amy joke; less for the Jenner and Tambor jokes), or think that he was just plain being offensive, one thing's clear: He doesn't care what anyone thinks and there's no doubt much more controversy to come as the show goes on.