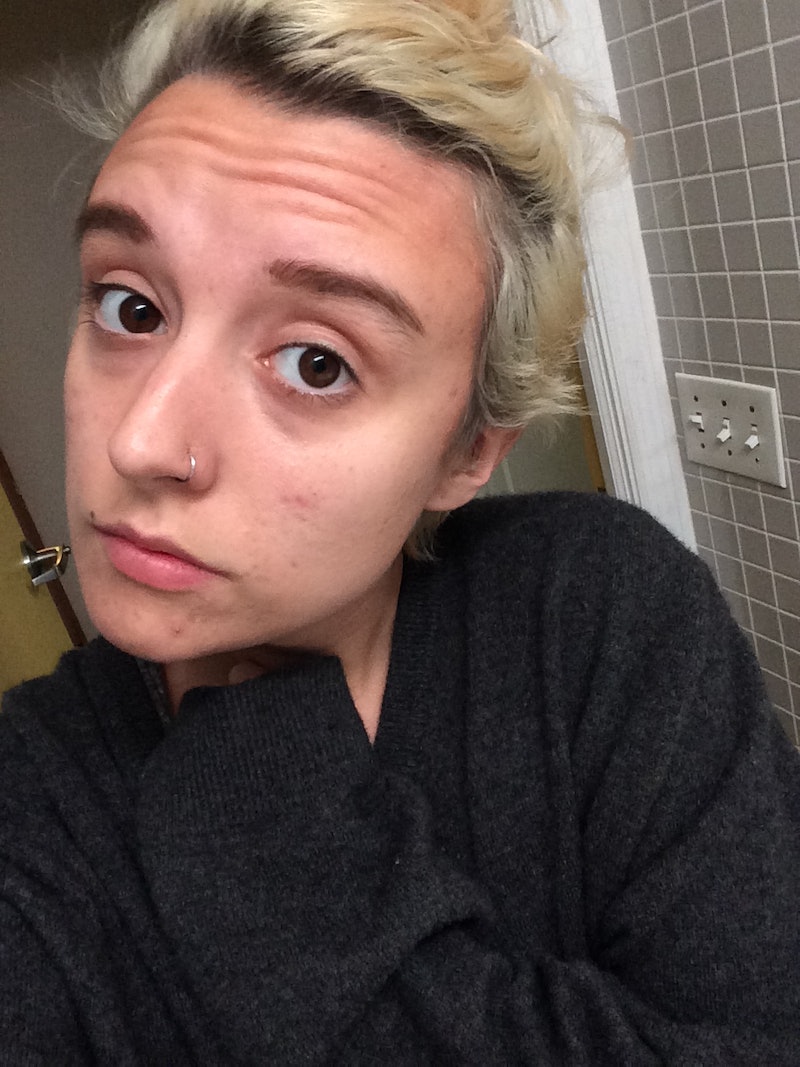 When you're living with a chronic illness, it can be very difficult to maintain a body positive attitude about yourself. Chronic pain can prevent you from performing certain tasks as well as you'd like. Your body is always changing, so sometimes you feel like you can no longer trust it. Certain members of the medical community's penchant for size discrimination, love for BMI, and seeming quest to end the "obesity epidemic" can be discouraging. As someone who has lived between my bed and a doctor's office on and off for 10 years due to three different tick-borne illnesses, I know how these experiences can affect the way you feel about your body.

Since middle school, I've been told by multiple health professionals that I am overweight. This diagnosis shocked me when I first heard it, and the shame of it followed me through much of my teenage years like the weight I couldn't manage to lose. At the time, "fat" was the last thing I wanted to be, and I was afraid that weighing 135 pounds at age 14 meant that I was precisely that. I never wore belly-baring bathing suits. I hid behind baggy sweatshirts. And by the time I reached high school, I took even more precautions to hide while quietly willing myself to stick to an ab-burning routine from the pages of Seventeen.

However, I began to have bigger issues during freshman year of high school, when the mysterious illness I contracted three years before (or the one I was making up, depending on which health professional you asked) became unbearable. I couldn't sleep at night because of pain, and constantly dealt with migraines and nausea. By the end of the year, I was bedridden and terrified. I was finally diagnosed properly as having three different tick-borne diseases (chronic Lyme disease, Bartonella, and Babesia), and began what would be a long and often painful treatment with a new Lyme-literate doctor.

Between the disease and the vomit-inducing medicine, I lost a lot of weight during those years. The fat around my belly and thighs disappeared, and my collarbones began jutting out from underneath my skin. I didn't need to lose weight, of course, especially under such circumstances. But still, as I watched the number on the scale dip lower and lower, I felt relief. "I may feel like utter shit," I told myself, "But at least I'm beautiful now." Well, as beautiful as one can be with dull and yellowing skin, gray-stained teeth, and nails that fell off left and right. The treatment and the disease were destroying my body, but I could hold my head a little higher knowing I was at a "healthy BMI."

Reminiscing about this all is sad for many reasons, but especially because of just how blind my self-hatred made me. I can't blame myself for that entirely, though, since so many medical professionals (and even my own parents) told me I could "do without the belly," and other things of that nature. The doctors I saw fueled my obsession with the number on the scale, with burning calories, and with the thought that I wasn't exercising enough (even though my body was often too disabled to move). When I started dropping the pounds after long episodes of nausea and vomiting, those same people would congratulate me. And I would feel so triumphant about this that I would try to extend my fasting for as long as possible in an effort to maintain this newfound "healthy weight."

I was introduced to body positivity pretty late in life, and so it wasn't until after I was in remission that I began to repair the damage I had done by simply not loving myself. Learning to come to terms with my belly, my stretch marks and my teeth led me to love certain other parts of my body that have been forever changed from living with three tick-borne illnesses — like my foggier and slower-moving brain, my fragile ankles, and certain hair and nails that never grew back properly. With this new attitude, I was able to reflect on my experience as a chronically ill child more compassionately, extending a warm hand to them and saying "You were just as beautiful and worthy of love sick as you are healthy." I was sick, I couldn't help it. Yet in the back of my mind, it always felt like my fault. That maybe I just wasn't trying hard enough, and maybe by being really hard on myself it would cause me to recover faster. I know now how illogical that is.

Today, I love my body (for the most part). I know that pant sizes are just numbers, and I know that things like BMI and one universally "healthy weight" are bullshit. I never returned to those ab-burning exercises, and instead began practicing yoga for a balanced mind and body. I eat whatever I want, restricting my diet based only on how I feel and not how I look. I bare my belly all the time in crop tops and colorful bralettes, and am aware of my straight sized privilege. I feel body positive, and take active steps toward perpetuating and maintaining that ideology every day. But recently, I was re-diagnosed with tick-borne illness, beginning my treatment and my battle with self-love all over again.

Those moments leading up to a new doctor's appointment felt like a nightmare, as my old struggles with body image crept up on me. Memories of being disabled and bedridden flooded in, filling me with concern that that would be my normal again. Ancient anger and mistrust toward my body sprung up as I scolded myself for not eating well enough, not being active enough, and not doing enough tick checks. But I stopped these thoughts in their tracks before we left the waiting room. I had the power to make this time different from the last. And I decided that I would.

One of the first things they did after taking me back to the examination room was request that I take off my shoes so I could be weighed. I rolled my eyes, but felt strong in my preparedness in facing the scale for the first time in a long time. As I got on, I anticipated to see my usual 135 pounds or more pop up. I prepared a speech for the nurse, in case she attempted to shame me for the number. But when I looked down at the scale, it read 119. I tried to hide my gasp, but I couldn't. Weight loss is common in people with Lyme disease, as well as other tick-borne infections, but I couldn't remember ever weighing that little, even when I was at my worst health-wise. My first recollection of obsessing over my weight was as an 11-year-old, when I was at a (whopping) 120 pounds. I was sicker than I had thought.

Later, I morosely told my parents about the weight loss — and they congratulated me. My dad even went so far to suggest I finally deserved to eat the frozen vegan mac 'n' cheese I'd been saving.

The sheer body negativity of their words upset me at first. But I was also disappointed in myself, and the excitement I felt when they complimented me. It was like this inexplicable surge of confidence sprung through me again, from a weight loss I experienced because of disease. Thankfully, with my arsenal of body positive thinking at the ready, I was able to remember that this wasn't something to celebrate. I was ill.

One could debate the intersection of weight and health for hours on end. But, in most cases that I've witnessed throughout my life, the desire for someone to lose weight often seems to stem from beauty-based fears about "getting too chubby," or the desire to achieve a so-called "bikini body." In my eyes, weight loss (be it encouraging someone to do so or congratulating someone on weighing less) is almost never body positive. So as a person who has struggled with loving their body, I refuse to celebrate it.

This time around in my illness, I plan to immediately shut down discussions of calorie intake. I will dismiss anyone telling me, "Wow, you look like you lost weight!" in a complimentary manner, and maybe tell them that I don't feel flattered by that sort of comment. I'll tell them that losing weight because of an infectious disease is depleting my body's systems, and that it feels yucky and upsetting for people to discuss it in a positive manner. I don't like watching my body wear away. I don't like losing control over my body and health. It's scary. I'm scared. And the last thing I want to hear is someone bringing attention to one of my symptoms.

Although it's difficult to remember, I know that I am beautiful at any size. But I refuse to glorify the weight loss caused from a tick-borne illness (or any disease, for that matter). Weight is a number, and it's one I have to distance myself from. I'm not going to pretend that this byproduct of my illness is a good thing, or that I needed to lose weight in the first place. Because no matter what size I am and no matter what doctors or family members tell me, I always deserve the vegan mac 'n' cheese in the freezer.

More like this
Most Comfortable Underwear For Big Butts
By Audrey Williams
How Skin Care Experts Are Stepping Up To Support Transgender Patients
By Audrey Noble
Is It Actually Bad To Cut Your Cuticles?
By Stephanie Chon and Paris Giles
Psychologists Claim Dopamine Dressing Is A Real Thing
By Dominique Norman
Get Even More From Bustle — Sign Up For The Newsletter