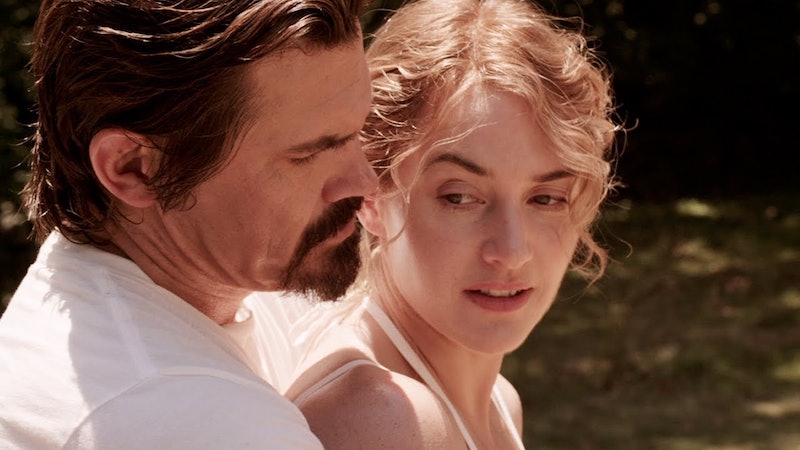 If you have been longing to see powerhouse actors Kate Winslet and Josh Brolin team up for a romantic drama, then Labor Day is the film that you should put on your must-see list. This film stars Winslet as a depressed single mother named Adele who lives with her 13-year-old son in rural America. When a man named Frank (Josh Brolin) approaches Adele and her son, Henry, in a store, asking for their help, it sets off a series of events that neither of them could have predicted. The film is based on Joyce Maynard's novel of the same name and promises to be a serious tear-jerker.

In one key scene within the film, Adele and Frank bake a peach pie together. (Think the pottery scene from Ghost, if the pottery ended up being delicious.) The actors used Joyce Maynard's family recipe in order to create the pie they needed for the scene. Since today happens to be National Pie Day, what better than to spend the day baking a classic peach pie of your own? For all of you bakers out there, we've supplied Joyce Maynard's coveted recipe for you to try out yourselves (perhaps with the help of a significant other?). Here it is:

2. Preheat the oven to 400°. In a large bowl, mix the flour and salt. Using a pastry blender, work in the shortening and 1 stick of butter until the mixture resembles coarse crumbs. Sprinkle 1 tablespoon of the ice water over the flour mixture, stirring gently with a fork. Continue adding the water just until the dough holds together. Shape the dough into a ball and divide it into two discs, one slightly larger than the other.

3. Place the smaller disc on a sheet of waxed paper, and use a lightly floured rolling pin to roll the dough into a 12-inch circle. If the dough sticks to the rolling pin, dust it lightly with more flour. Lay a 9- to 10-inch pie pan face down on top of the circle; flip the pan over and remove the paper. For the crust, on a sheet of waxed paper, roll out the other disc to form a 14-inch circle. Do not roll the dough more than necessary.

4. Sprinkle the tapioca on the bottom crust. Add the filling, mounding it in the center, and dot with 1 tablespoon butter. Lift the waxed paper with the remaining crust and flip it over the filling. Peel back waxed paper. Trim the edges of the crusts and pinch together the top and bottom crusts. Optional: Roll out the trimmings and cut into decorative shapes. Brush the pie with the egg, and arrange the shapes on the crust. Sprinkle with sugar. Poke fork holes or cut vents in the top crust. Bake 40 to 45 minutes, or until golden brown. Serve warm.

Now that you've made the pie, go see the movie! Labor Day hits theaters on Jan. 31.

More like this
Jennifer Lopez Found The Perfect Ben Affleck Throwback Video For Mother’s Day
By Stephanie Topacio Long
Ryan Reynolds’ Mom Hilariously Tests His Patience In A Mother’s Day Video
By Brad Witter
What Does Doctor Strange’s Third Eye Mean?
By Arya Roshanian
What’s New On Netflix: A Victoria Justice Rom-Com & The Return Of David Letterman
By Arya Roshanian
Get Even More From Bustle — Sign Up For The Newsletter