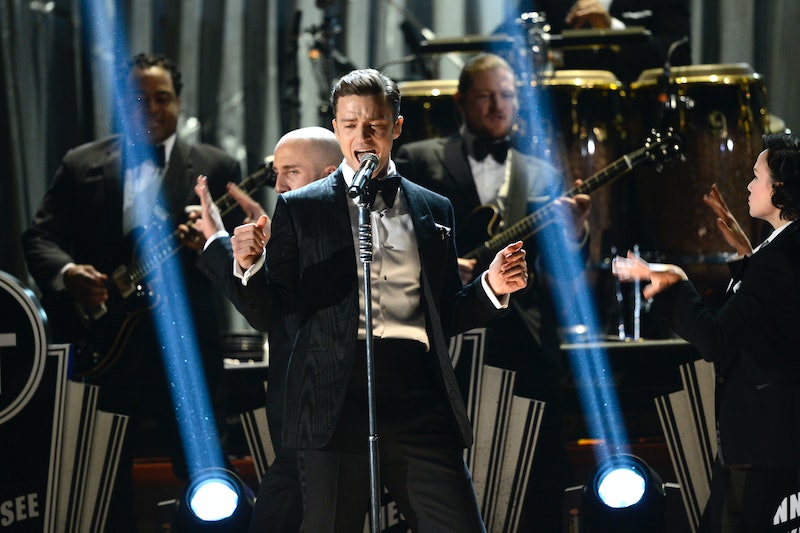 The Grammy Awards are the highest honor in music, but sometimes. just performing on the Grammy stage can turn a singer into an international icon. The Grammys have welcomed song and dance from music legends and newcomers alike, from Barbra Streisand and Whitney Houston to Miguel and Frank Ocean. For the 56th Grammy Awards this Sunday, Robin Thicke, Stevie Wonder, Katy Perry, John Legend, and Lorde are among the list of performers set to light up the stage and possibly add their moment to the list of Grammy greats.

With the awards show quickly approaching with veteran host LL Cool J to lead the way, it's time to acknowledge the fiercest performances in Grammy Award history. Cue the band.

It's one thing when a music legend takes the stage. It's quite another when TWO music legends take the stage together. At the 2008 Grammy Awards, Tina Turner and Beyonce redefined hair flipping when they joined together for this duet rendition of Turner's iconic "Proud Mary." The union redefined the meaning of the word diva.

When Pink sang about glitter in the air, she meant it quite literally with this aerial performance from the 2010 Grammys. Just watching this trapeze routine of her hit song, "Glitter in the Air," makes us tired. We can't even imagine how Pink managed to sing on perfect pitch while UPSIDE DOWN. We tip our hats to you, Pink.

While this performance included very minimal choreography and special effects, Whitney Houston's perfect performance of her hit song, "I Will Always Love You," proved her nickname as "The Voice." The performance is so iconic, it lives on in our memory — and our hearts.

When Whitney Houston suddenly died less than 24 hours before the 2012 Grammys, Jennifer Hudson paid tribute to the music legend with this haunting performance of "I Will Always Love You." The emotionally-charged atmosphere at the Grammys was so palpable, we could feel it through our television screens.

This 2013 performance brought us back to a classier time in music when real instruments were played, men wore suits, and television was colorless. While performance was literally aired in sepia, it marked the return of Justin Timberlake and-more importantly-the return of some good, 'ol on-key live singing.

Quite arguably the best performance in Christina Aguilera's career, her tribute to James Brown with her rendition of "It's a Man's World" at the 2007 Grammy's reminded us all why Aguilera is one of the best singers of all time. Between the white suit, all of the soul, and the effortless vocal runs, we crown Ms. Aguilera as one of the reigning queens of the Grammy's.

Once upon a time, pop's leading ladies came together to produce a modern take on Patti Labelle's Lady Marmalade. Lil Kim, Mya, Christina Aguilera, and Pink joined together in their slinkiest garb to perform the song live, with a surprise return of Labelle herself to finish it all off in the most diva-esque style possible.