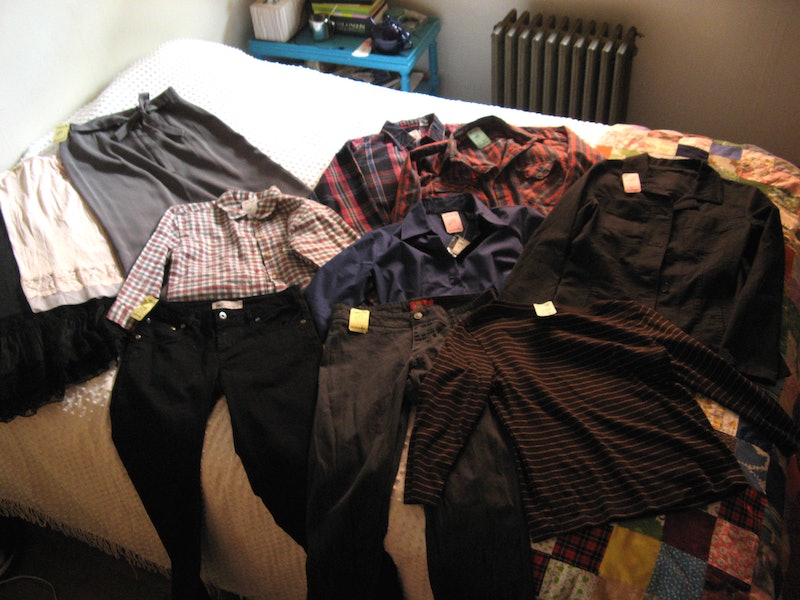 Art, gender, and the art of gender collide in two photo series where men and women were asked to wear each other’s clothes for a photo shoot.

Spanish photographer Jon Uriarte’s Men Under the Influence was inspired by discussions the artist had with male friends about how “relationships have changed since their parents generation.” His series consists of solo portraits of men dressed in their girlfriends’ clothes. (We'll pause so you can click through and take a peek. OK, back?) Shot exclusively indoors, the photos have an illicit, closeted tone, though some of the men look more comfortable with the scenario than others. With girlfriends literally out of the picture, the photos zero in on “the confusion the male may be experiencing with this change.”

Unclear is what Uriarte means by “change.” One would like to think he’s referring to greater financial, labor, and decision-making equity in heterosexual relationships, though the photos seem to read more like a veiled condemnation of male “feminization.”

Switcheroo is an ongoing series by Vancouver photographer Hana Pesut. Each entry features two photos of male and female companions, the first in the clothing they were stopped in, the second after they’ve swapped threads. (Go see those, too.) Pesut records her subjects outdoors and in public, giving them a more relaxed, open feel.

With both sexes playing along, the photos endow their subjects with a much greater sense of agency. Interestingly, participants also try to replicate each other’s body language from the initial photo. The long, scrolling list of men and women willing to have their photo taken in each others clothing—some while smiling no less—suggests we may be growing more comfortable with the idea that blurring gender roles does not mean losing oneself.

Though Uriarte and Pesut’s series differ in focus and tone, both seem to visually emphasize the nuance of contemporary womanhood as compared to the inflexibility of modern masculinity. One barely bats an eye at the women in men’s clothing, but its hard not to study the dudes in dresses. It’s a maddening chicken and egg question. What is producing the novelty: the strictness of traditional feminine trappings or our current notions of manhood?

More like this
How To Fight For Reproductive Rights, Based On How Much Time You Have
By Courtney Young
Sandra Bullock, Girlboss Extraordinaire
By Matt Harkins & Viviana Olen
Lydia Leonard Is Setting The Record Straight
By Olivia-Anne Cleary
The Most Compatible Life Path Numbers, According To Numerologists
By Kristine Fellizar
Get Even More From Bustle — Sign Up For The Newsletter