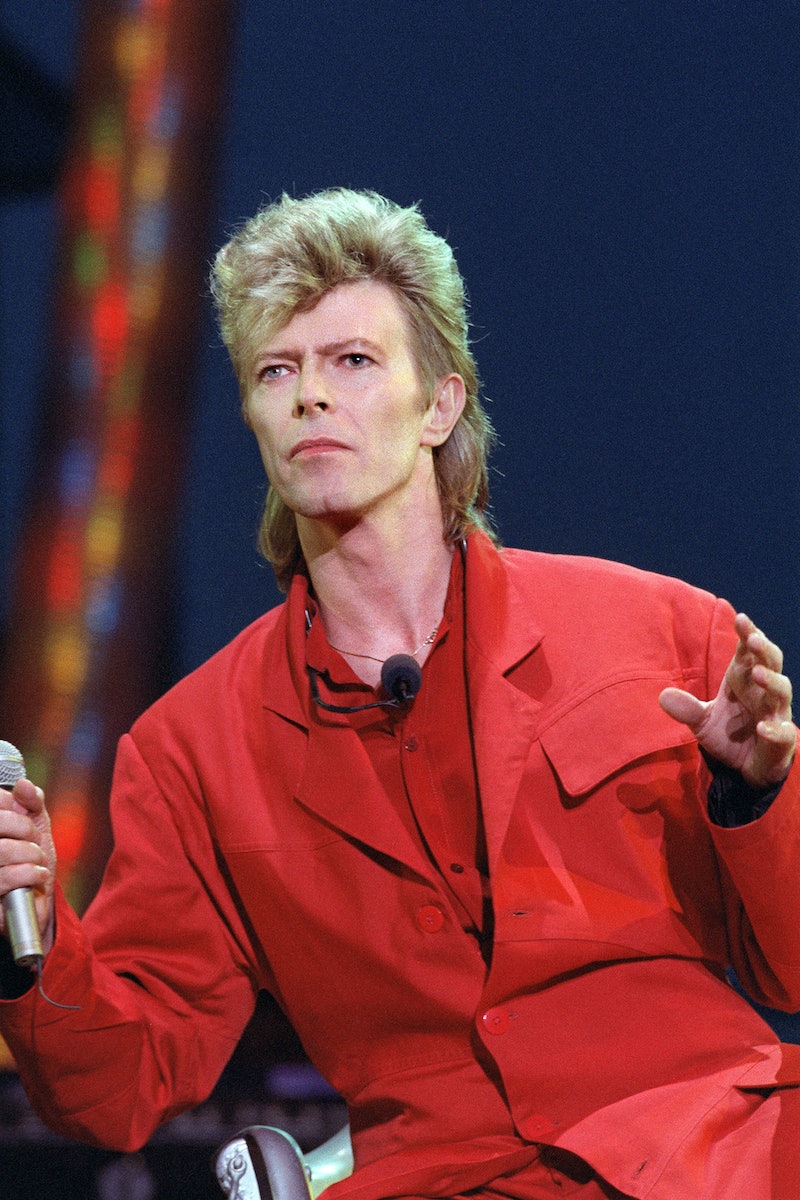 It's never easy to hear that beloved artist has passed away. Whether they touched your life just a little, or a great amount, there's a sense of immortality that goes along with being an artist whose music captured the world and generations upon generations. Few artists, however, felt as immortal — at least to me — as David Bowie. So when Bowie died at age 69 on January 10, after 18 months of fighting cancer, "shocked" didn't even begin to describe fans feelings all over the world. Luckily, much of the reason that the musician means so much to so many people has to do with the words he left with us. Bowie's words and lyrics will keep him mortal, long after he's left us.

Of course, Bowie was not just famous for the lyrics that have stuck in so many minds for so many years. He was a singer; he wrote songs; he played so many instruments; he was a producer and an actor; he challenged gender norms; and he even tried his hand at comedy once or twice (most notably on Ricky Gervais' Extras). For whatever accomplishment you remember Bowie by, take a moment to also remember the words he left behind. Whether they were sung or spoken, Bowie's words were always rife with meaning and significance.

"Fame, it's not your brain, it's just the flame / That burns your change to keep you insane"

Bowie's lyrics were both beautiful and biting, and this lyric from "Fame" — a scathing takedown of the power of the limelight — is that in a nutshell.

"This is Major Tom to Ground Control. / I'm stepping through the door, / And I'm floating in a most peculiar way. / And the stars look very different today."

Perhaps one of Bowie's most iconic verses absolutely earns its place among his greatest lyrics ever.

And I can't not include the verse that follows it.

This line from Bowie's "Young Americans" exemplifies his take-no-prisoners approach to writing lyrics.

"I'm not a prophet or a stone aged man, just a mortal with potential of a superman. I'm living on."

From "Quicksand," this lyric is so very Bowie.

"I think I have done just about everything that it’s possible to do."

And it's true. Bowie wasn't just writing spacey, high concept lyrics. He was living a life that inspired them. "I was virtually trying anything. I really had a hunger to experience everything that life had to offer, from the opium den to whatever. And I think I have done just about everything that it’s possible to do – except really dangerous things, like being an explorer. But anything that Western culture has to offer – I’ve put myself through most of it," he told the Telegraph in 1996.

Bowie described a conversation he had with John Lennon about fame to Time Out in 1983.

"When all the world was very young / And mountain magic heavy hung / The supermen would walk in file / Guardians of a loveless isle."

His lyrics from "The Man Who Sold The World" cut deep, and yet so beautifully.

"I don't know where I'm going from here, but I know it won't be boring."

Bowie told his fans this while in concert at Madison Square Garden in 1998, according to CNN.

"Let's dance — put on your red shoes and dance the blues."

This last one — from, of course, "Let's Dance" — is so quintessentially Bowie. It's a lyric that has stumped many a listener, and one that many suspect is tied to "The Red Shoes," a tragic story by Hans Christian Andersen though it's set to one of Bowie's most danceable, light-sounding tunes.

Bowie will be missed, not just for his influence on the music industry, but for the way he wormed his way into all of our brains every he time he spoke to us, whether through simple words or words set to his beautiful music.