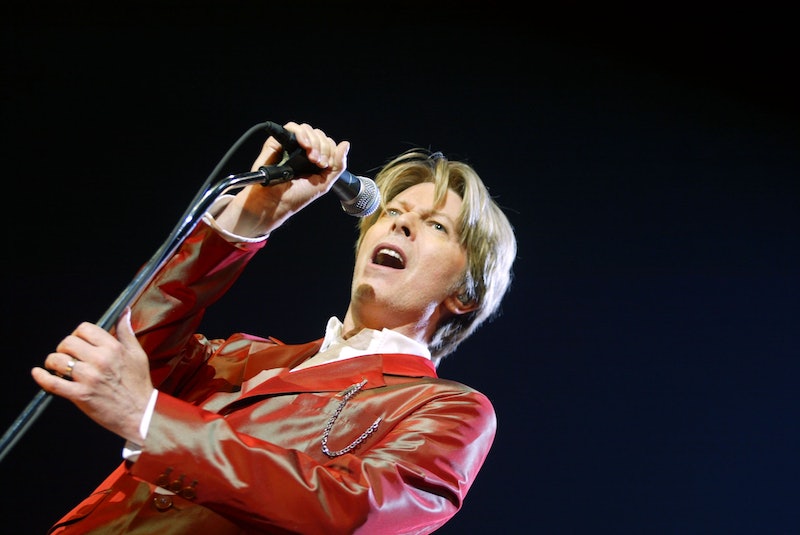 Early Monday morning, it was confirmed: Legendary rock musician David Bowie has passed away from cancer at the age of 69. Bowie's battle with cancer had not been made public before the announcement — the news was shared on his official Facebook page by his representative, who wrote, "David Bowie died peacefully today surrounded by his family after a courageous 18 month battle with cancer. While many of you will share in this loss, we ask that you respect the family’s privacy during their time of grief." The news comes as a shock, and his legions of fans around the world are likely looking for some semblance of comfort during this difficult time. Bowie's music touched many — from his stellar voice to his poetic lyrics and overall flawless tracks, the guy wasn't a legend for no reason. Looking to Bowie's last public performance may give fans some comfort, though, in the face of this tragic, devastating news.

At the time, as Rolling Stone pointed out in 2014, it wasn't exactly known this would be Bowie's last performance. In 2006, Bowie performed alongside Alicia Keys in NYC's Hammersmith Ballroom, at the Black Ball fundraiser. The duo sang Bowie's hit "Changes" together, and, as seen in the video, lit up the stage — though the frequency of Bowie's public performances had dwindled at the time following a heart attack he suffered during a concert that was part of his Reality tour in 2004, he still had amazing stage presence:

Following his performance with Keys, however, Bowie never appeared on stage again — though he did release an LP in 2013 called The Next Day, he didn't tour for it, though he gave no explanation as to why. Two years later, in October 2015, Bowie's booking agent John Gidding confirmed at the International Festival Forum in London that the musician's 2006 performance would indeed remain his last — Bowie had officially retired from the stage. From Music Week :

David [Bowie] is one of the best artists I’ve ever worked with. But every time I see him now, before I even speak to him, he goes, I’m not touring and I say, I’m not asking... He has decided to retire and, like Phil Collins, you can’t demand these people go out there again and again and again. I’m really pleased and proud that the last show he ever did in the UK was the 2004 Isle Of Wight Festival.

Following the statement, Bowie did record more music — the theme song for Sky Atlantic's The Last Panthers is his doing — but didn't appear on stage again before his death.

News of Bowie's passing was first shared by Bowie's official Facebook page, before being confirmed by multiple news outlets including Sky News and E! Online: