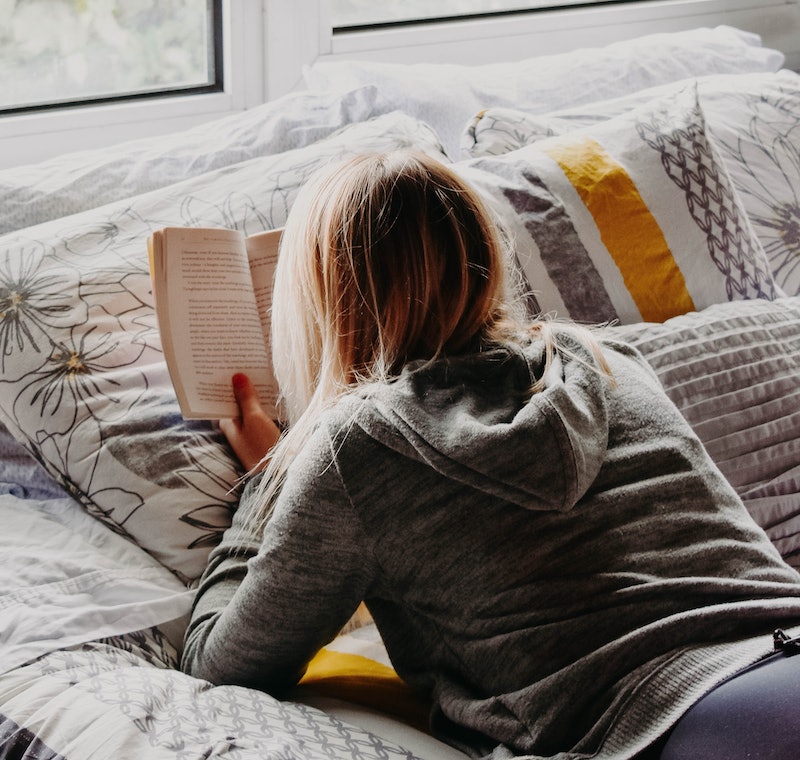 I don’t know about you, but when I’m wandering between a bookstore’s shelves, browsing for a great new read, a book’s back cover summary isn’t always the first place I look — I mean, hello: spoilers. (Nobody likes spoilers, am I right?) Nope, when I’m searching for my next potential favorite book of all time, sometimes I look no further than the very first sentence. Sounds crazy, I know, but there really are tons of books that will hook you in from the very first line (and then won’t let you go until the last).

Sure, that might seem like a lot of pressure to put on one, tiny first sentence; especially when there are so many potentially fabulous sentences to follow. But think of it this way: kind of like renting a new apartment, or trying on a new pair of jeans, or sitting down to dinner on a blind date — you’ll know whether or not you’re into it pretty much right off the bat, right?

Not sure you believe me yet? Well here are 11 books that will hook you in from the very first sentence. Check ‘em out — they just might change the way you shop for books forever.

1. My Name Is Lucy Barton by Elizabeth Strout

First Line: “There was a time, and it was many years ago now, when I had to stay in a hospital for almost nine weeks.”

Lucy Barton hasn't spoken to her mother in years. But now, as she endures an extra-long recovery from what was supposed to be a simple medical procedure, her mother appears at her bedside. As the two reconnect over simple hometown tales and community gossip, Lucy begins to realize that the distance between her and her mother has affected more than just their relationship. My Name is Lucy Barton tells the story of the totally lovable Lucy, and her struggle to understand the story of her life from the perspective of a hospital room.

2. Diving into the Wreck by Adrienne Rich

First Line: “Out in this desert we are testing bombs, / that’s why we came here.”

Leave it to a poet to know how to grab readers with a single sentence. In Diving into the Wreck , poet Adrienne Rich explores themes of war and violence, feminism and justice, and takes a hard look at a country on the brink of profound change. Although Rich wrote this poetry collection with Vietnam-era America in mind, it will definitely speak to readers today.

3. Poor Your Soul by Mira Ptacin

First Line: “Every few Sundays, Segundo, the very short superintendent who lives in the basement at 223 East 32nd Street, opens the back pages of the Village Voice and orders two very tall call girls.”

This story definitely isn't headed where you might think — which is part of the reading roulette fun of selecting reads based on their first sentence. When writer Mira Ptacin discovered the child she was carrying wouldn't be able to survive outside the womb, she was faced with some devastating choices. It is through the lens of this loss that Poor Your Soul considers another loss: one experienced by Ptacin's mother, who mourns a child of her own.

First Line: “The first annoying thing is when I ask Dad what he thinks happened to Mom, he always says, ‘What’s most important is for you to understand it’s not your fault.’”

Life in suburban Seattle isn't all it's cracked up to be, in the hilarious (and a little sad) novel Where'd You Go, Bernadette . When Bernadette Fox disappears out a bathroom window just days before her family is due to set off to Antarctica, her daughter Bee is left to pick up the pieces. As you follow Bee's search for the truth, you'll realize Bernadette might have been a little crazy, but you totally can't blame her.

5. Hunger Makes Me a Modern Girl by Carrie Brownstein

First Line: “I only wanted one thing on tour: to slam my hand in a door and break my fingers.”

I think we've all felt this way at one time or another: compelled to do the only crazy, desperate thing we can to tempt fate, challenge the norm, escape, change course. But the question is, why does feminist punk rock icon Carrie Brownstein want to? Hunger Makes Me a Modern Girl zooms in on Brownstein's rollercoaster life in music, and so much more.

6. The Light of the World by Elizabeth Alexander

First Line: “The story seems to begin with catastrophe but in fact began earlier and is not a tragedy but rather a love story.”

You just know this one is going to be a tear-jerker, from the very beginning. In The Light of the World poet-turned-memoirist Elizabeth Alexander tells the story of the unexpected death of her husband, and what it takes to reinvigorate a sense of meaning into one's life after such a loss. It's really just so sad and beautiful.

First Line: “I was asleep when he died.”

In case you didn't know, Patti Smith is kind of the coolest. Her memoir Just Kids affirms that fact and more as it celebrates the life of Smith's dear friend and artistic partner, Robert Mapplethorpe, and offers an intimate glimpse into the years they shared together as young artists. Their story will make you seriously consider throwing your nine-to-five job away to move into an artist's annex in Paris. (If you haven't already.)

First Line: “Punting the prairie dog into the library was a mistake.”

So many questions, so little time. What is a prairie dog doing outside a library? Who is doing the punting? Did the punter secretly know this would be a mistake before committing the act of punting? And most importantly, did the prairie dog survive? You'll just have to read Gold Fame Citrus to find out. (And believe me, that's not even the most compelling line of this novel.)

9. Sunday's on the Phone to Monday by Christine Reilly

First Line: “Mathilde’s father, James Spicer, had been the last person she’d known to use a shoehorn and a handkerchief, archaic tools gone the way of arrowheads and telegrams.”

There's just something compelling about this man: who is he, and where is he going, and does he really need to use a shoehorn or does he simply enjoy the ceremony of it? You'll want to find out, in Sunday's On the Phone to Monday , a novel that tells the story of one family; how each family member's life diverged from the hopes and expectations they had for themselves, and how together they'll survive the loves and losses that life holds.

10. The Luminaries by Eleanor Catton

First Line: “The twelve men congregated in the smoking room of the Crown Hotel gave the impression of a party accidentally met.”

Even if you don't already know the plot of Eleanor Catton's novel, The Luminaries — a New Zealand gold rush, a strange suicide attempt, a mysterious disappearance, and maybe even a ghost or two — this sentence alone sings all things clandestine, maybe even a little nefarious? You know you want to dive right in.

First Line: “Very little is known, though much has been written, about the true nature of the jinn, the creatures made of smokeless fire.”

It's 1,000 years into the future, and not nearly as much has changed as you might think. Except the things that have changed, have changed a lot. Two Years Eight Months and Twenty-Eight Nights is narrated by characters who are looking back on "the war of the worlds" and how it defined their present. A little bit magical, a little bit philosophical, and a lot of a good story, you won't want to miss this one, first sentence to last.