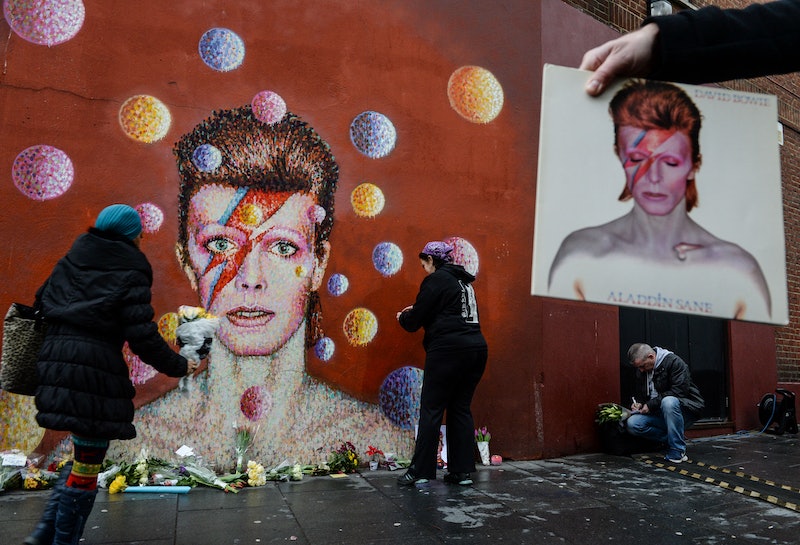 Musician, actor, and all-around legend David Bowie sadly passed away on Sunday, his publicist confirmed on Monday morning. The glam rock pioneer died after an 18-month battle with liver cancer. For the world of music, this loss is immeasurable. There have been very few others like Bowie, who fell on the scene like an alien from outer space, dazzled us with his gender-bending theatrics, and pushed the boundaries with every project he laid his hands on. In honor of the true original, get to know some little-known, surprising facts about David Bowie, whose stardust glow will illuminate the world for years to come.

Bowie's death on January 10 came just two days after the singer released a new album on his 69th birthday. While Blackstar sees the musician returning to his more experimental ways, Bowie has created some of the most recognizable and anthemic songs of the last 50 years, from "Ziggy Stardust" to "Let's Dance" and "Under Pressure," his rhapsodic collaboration with Queen. Upon learning of his death, UK Prime Minister David Cameron said in a statement, "Musically, creatively, artistically David Bowie was a genius."

For a man who always broke new ground wherever he walked, there are, not surprisingly, numerous fascinating details about Bowie, who dared us to "turn and face the strange." Here are 12 facts about David Bowie that are almost as beautifully strange as he was.

He Was Born David Robert Jones

But he changed his name to avoid confusion with The Monkees' Davy Jones.

He Chose Bowie After The Bowie Knife

He named himself after the Bowie knife because "it cuts both ways."

Bowie founded the group at the age of 17 and went on the BBC (in his first-ever television appearance) to defend his hairstyle, saying, "But for the last two years we’ve had comments like ‘Darling!’ and ‘Can I carry your handbag?’ thrown at us, and I think it just has to stop now."

He Said No To Knighthood

In 2003, Queen Elizabeth offered to knight Bowie, but he respectfully declined, telling The Sun, "I seriously don't know what it's for."

His Ziggy Stardust Persona Nearly Cost Him His Sanity

Bowie toured as his alter ego, Ziggy Stardust, from 1972 to 1973 but had to retire him live on stage at the Hammersmith Odeon, where he told the crowd:

[Ziggy Stardust] wouldn't leave me alone for years. That was when it all started to go sour ... My whole personality was affected. It became very dangerous. I really did have doubts about my sanity.

He May Have Had A Tea Phobia

According to a widely spread rumor, Bowie had a traumatic experience with a cup of tea when he was 5 and has not drank another cup since (except for Japanese green tea).

His Left Pupil Was Permanently Dilated

While brawling over a girl in school, Bowie was punched in the face by his friend George Underwood, which left his pupil permanently dilated.

There's A Spider Named After Him

Though it's not from Mars, the Heteropoda davidbowie does somewhat resemble the singer with its wild bright orange hair.

He Has Appeared In 28 Films

His film credits include Labyrinth, Basquiat (in which he played Andy Warhol), and Zoolander, for which he was nominated for an MTV Movie Award.

He Created His Own Internet Service Provider

True story: the singer started his own ISP in 1998 and called it BowieNet. It cost 10 pounds a month and came with 20MB for users to create their own homepage. BowieNet was in service until 2012.

Bowie's song "Space Oddity" was used by the BBC in its coverage of the 1969 moon landing, instantly propelling the singer to fame.

He Was Once Stalked By A Pink Bunny

During his 2004 tour in North America, Bowie was followed by someone dressed in a pink bunny costume. It seemed harmless until the singer discovered that the bunny had followed him on one of his flights.