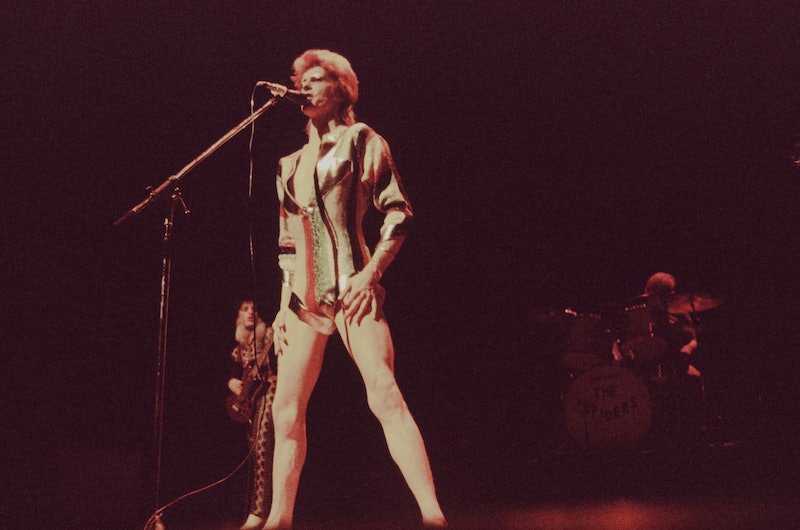 International music and fashion idol David Bowie died Sunday at his London home, two days after his 69th birthday and the release of his latest album, Blackstar. Born David Jones, the star died peacefully "surrounded by his family after a courageous 18 month battle with cancer," a post on his social media pages said. Bowie's son, Duncan Jones, confirmed the news on Twitter, writing: "Very sorry and sad to say it's true. I'll be offline for a while. Love to all." Fans were shocked by his sudden death, and tributes to Bowie's life and career popped up around the world Monday.

After Bowie's first American number one single, Fame, in 1975, he quickly became an iconic pop star in the U.S. Rolling Stone described him as "a consummate musical chameleon" who's "been a folksinger, androgyne, alien, decadent, blue-eyed soul man, art-rocker and a modern pop star, with each persona spawning a new league of imitators." Bowie constantly took on new identities, though his most recognizable is no doubt Ziggy Stardust, the sexually ambiguous pop star brought to life in his 1972 album The Rise and Fall of Ziggy Stardust and the Spiders From Mars. While other rock stars wore only jeans, Bowie caught the world's attention by overtaking the stage in flamboyant, futuristic jumpsuits and colorful makeup.

Here's a look at touching tributes to Bowie, from his London neighborhood to his longtime friends in the music industry.

The Ritzy Cinema in Brixton, the London neighborhood where Bowie grew up, wrote "David Bowie, our Brixton boy, RIP" on its sign Monday.

Londoners left flowers, paintings, and other tributes to Bowie under a mural of him on the wall of a Morley's Department store. Jesusa Ricoy, who left flowers, told The Evening Standar's Laura Proto and Mark Chandler : "I always hated people crying for celebrities but this morning I found myself crying. His music was very much part of my life."

Hundreds of Bowie fans plan to throw a dance party Monday night in Brixton in honor of the star. A Facebook event was created, instructing people to meet outside the Ritzy and saying, "bowie's time on this earth may be over, but he sure left us some great music. today is a day to gather together and celebrate."

Another Brixton music venue and theater, O2 Academy, put Bowie's name on its sign next to "forever our hero."

Fans in the U.S. left flowers and candles near Bowie's star on the Hollywood Walk of Fame Monday morning.

The Prime Minister of the U.K., David Cameron, tweeted a personal tribute to the music icon, saying: "I grew up listening to and watching the pop genius David Bowie. He was a master of re-invention, who kept getting it right. A huge loss."

In a statement on Twitter, The Rolling Stones said: "The Rolling Stones are shocked and deeply saddened to hear of the death of our dear friend David Bowie. As well as being a wonderful and kind man, he was an extraordinary artist, and a true original."

Paul McCartney posted a touching tribute to Bowie and a photo of the two friends on his website that read:

David was a great star and I treasure the moments we had together. His music played a very strong part in British musical history and I'm proud to think of the huge influence he has had on people all around the world. I send my deepest sympathies to his family and will always remember the great laughs we had through the years. His star will shine in the sky forever.

Iggy Pop also tweeted in remembrance of the legend, writing: "David's friendship was the light of my life. I never met such a brilliant person. He was the best there is."