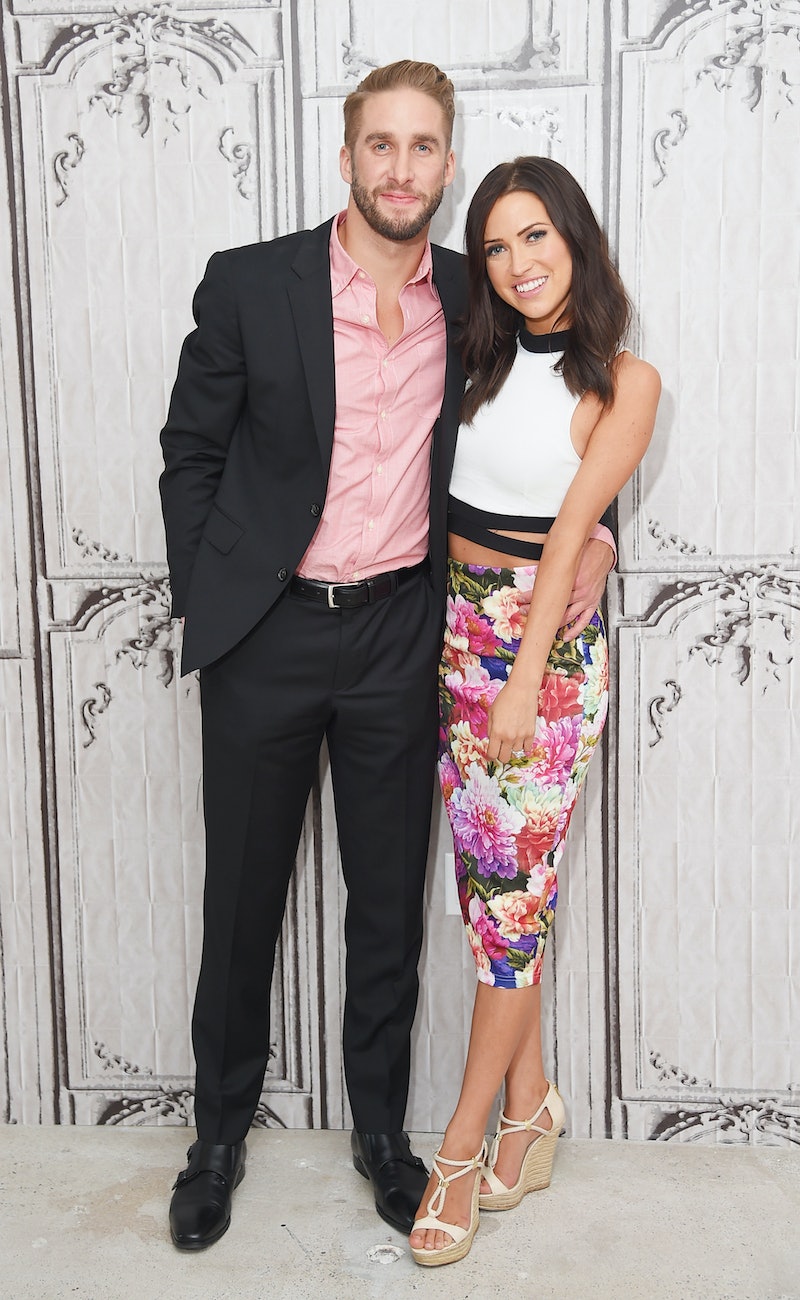 The new season of ABC's reality dating competition series The Bachelor is focused on Ben Higgins. He is one of the runners up from the last season of The Bachelorette, which ended with Kaitlyn Bristowe getting engaged to Shawn Booth, the official "winner" of the season. Recently, the couple appeared on Bachelor Live following The Bachelor season premiere — mostly to confirm they haven't broken up but haven't set a wedding date yet. And, their appearance had me wondering, what has Shawn Booth been doing since The Bachelorette wrapped?

To recap: On their season of The Bachelorette, Bristowe and Booth hit it off quickly — he even got the first impression rose! But, their season was fraught with drama, especially once Nick Viall, who had appeared on the previous season of The Bachelorette, showed up. He became a rival of Booth's for the affection of Bristowe, and may have caused some issues in the burgeoning relationship between Booth and Bristowe. Still, it seems nothing was going to get in the way of their love story since Bristowe ended up choosing Booth at the end of her season and they have since continued their relationship.

Since the cameras stopped rolling, Booth has kept busy; here is what the former Bachelorette contestant has been up to.

He Started His Own Fitness Business

At the beginning of The Bachelorette, we learned that Booth is a physical trainer, and the variety of tight shirts he wore throughout the season further illustrated that fact. Since the show, he launched Healthy Meal Plans by Shawn Booth, which offers meal plans, workout programs, and, for higher-paying customers, personal check-ins with Booth himself. So, now we know he's been working on his fitness.

He Tried His Hand At Blogging

In September of last year, Booth launched his own blog, focusing on three of his favorite things: Style, fitness and health, and music. The blog features stunning photos — some of Booth and Bristowe — and entries written by the site's namesake. However, Booth hasn't kept up with it and his last entry was in October. That's OK, though, we know he's been busy. Plus, blogging can be hard!

He Reunited With An Old Rival

Booth teamed up with Viall for Movember by growing mustaches throughout November in order to raise awareness for men's health, both mental and physical, as well as prostate and testicular cancer. If there were ever a reason to bury the hatchet, these two picked a good one. They even got fellow Bachelorette contestants from their season to join and raised more than $24,000.

He Went On A Bachelor Double Date

Booth and Bristowe recently went on a double date with fellow Bachelor couple Sean Lowe and Catherine Giudici. So, if you wanted to know whether all the Bachelor power couples hang out together: They do!

He Celebrated With Family

Not only did Booth spend the holidays with his family (adorable!), he also wished a happy birthday to his dog, Doodle, who turned eight.

He Moved In With Kaitlyn

Booth confirmed he and Bristowe moved in together to toofab.com, and they documented their dramatic search for the perfect Christmas tree via Snapchat — which they then uploaded and immortalized on YouTube!

He Reunited With Ben

The goodbye hug between the bros when Higgins was eliminated from The Bachelorette was maybe the most heartbreaking farewell in the history of the series. But, the two were reunited again thanks to Bachelor Live and fans were treated to a selfie:

So, although Booth may not be on television every week (unfortunately for us), he's certainly been keeping busy since The Bachelorette and fans can keep up with him via social media.