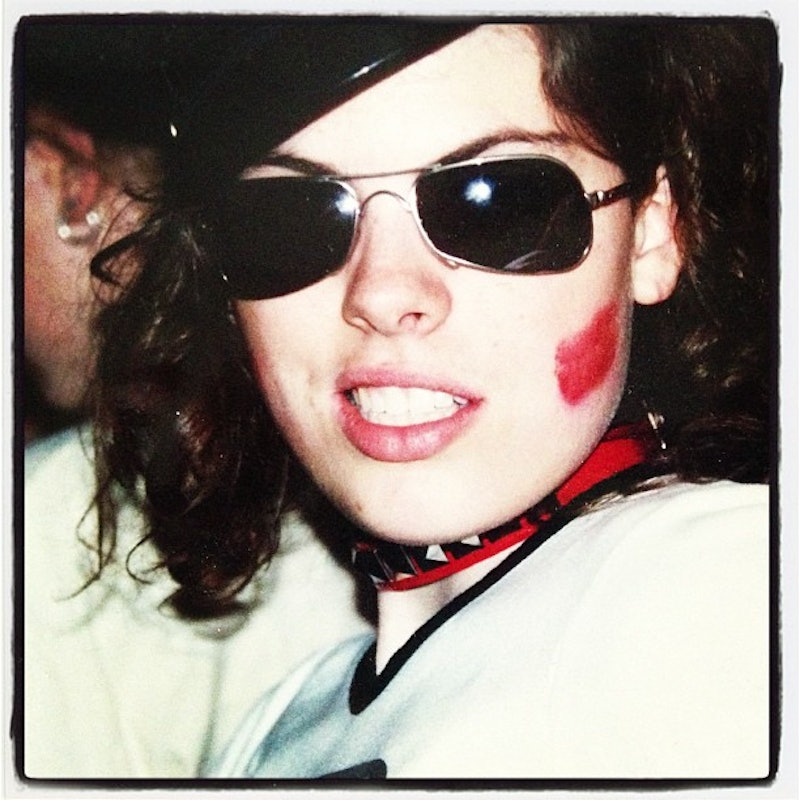 Artistic iconoclast, misfit messiah and queer icon David Bowie died yesterday at the age of 69. While he was beloved for the impossibly innovative music, art, and fashion he conjured throughout his life, Bowie was equally known for his Dionysian embrace of gender bending and sexual fluidity in his early years at a time when rock stars — or anyone at all for that matter — rarely expressed such private details in public.

In a now infamous 1972 interview with Melody Maker, Bowie emerged from the closet with a be-frocked flourish. He had recently switched from dresses (as on the cover of 1970's The Man Who Sold The World ) to more androgynous attire, and matter of factly stated: "I'm gay...and always have been, even when I was David Jones." Instead of killing his career, however, this admission only added to Bowie's radical chic as he blossomed into Ziggy Stardust, Aladdin Sane, and The Thin White Duke — a few of his notable alter-egos that would pervade his most exquisite records.

As the decade progressed, tales of Bowie's wild, open marriage to Angie Bowie and his high profile affairs with people of all genders became common knowledge. And as his fame grew, so did his legion of devoted fans: a motley crew of artists, weirdos, and sexual outliers who found in him the inspiration to live loudly and brightly and fiercely in spite of the explicit dangers they faced by doing so.

Before I read Judith Butler's declaration in Gender Trouble that gender is a social performance and "a fantasy instituted and inscribed on the surface of bodies," I knew it to be true from watching David Bowie. Although cursed with a birth date too late to feast on the fruits of his early work in real time, my social, sexual, and aesthetic development was nevertheless impacted by Bowie's art.

Growing up at an all girls school, I was surrounded by girls and women but felt distinctly masculine inside. By sixth grade, I wished fervently that I had been born a boy, and adopted a gait and style that I felt helped transform me — just a little bit. When I started to be cast as male characters in every play the school put on, I knew that a true transformation was possible, but I wasn't exactly sure what it might entail.

Later that year, I was gifted a copy of D. A. Pennebaker's 1973 concert documentary, Ziggy Stardust And The Spiders From Mars, and I found my answer. I fell in love with Bowie's strange, evocative lyrics and the visceral electricity of his music, understanding exactly what he meant when he sang, "if you think we're gonna make it, you better hang on to yourself."

Watching the pale, eyebrow-less alien in the film don his outrageous, androgynous costumes backstage and then somehow embody unbridled macho swagger one moment to become a fragile, coy seductress the next shattered every gender construct I held in my mind. I realized I had been caught in a binary that need not exist for me. While others might need to choose, I discovered I could be masculine and feminine, male and female, and that they were all costumes for me to wear, however I pleased.

Soon after I saw the film, my father, sensing my new obsession, bought us tickets to see Bowie perform in DC at a small club. It was my first club concert and the first time I went to a show knowing nearly every song the artist would play. I stood on my toes so long my feet went numb, craning my neck to take in every inch of his aura. He played old hits and rarities, commanding the stage in a stunning Alexander McQueen jacket fashioned out of safety pins and a tattered British flag. In a final encore, the lights flashed neon green, he flipped his hands up in a mask over his eyes and purred "I'm an alligator," before ripping into my favorite song at the time, "Moonage Daydream."

I screamed aloud, so excited to exist in the same room as Bowie in that moment, and as soon as I was home, typed up every memory and every feeling from the night (which incidentally initiated my lifelong love of music writing). After my fantasy had become flesh, in the passing weeks I no longer felt quite at odds with my body knowing I could fashion it as I saw fit — and knowing that my sexuality was mine to explore in the same way, too.

Over the past two decades since that first show, I have continued to immerse myself in Bowie's oeuvre — some years more so than others. Through him, I was able to discover a community of likeminded creators and weirdos (all Bowie-lovers to varying degrees) with the help of whom I've forged my own gender bending, sexually-free world. Today, most of the people I love are gutted after learning of his passing — and rightfully so. Although David Bowie the man belongs to his family first and foremost, and I cannot imagine their grief, David Bowie the myth, the legend, and the eternal archetype of transformation and re-invention belongs to us. We've lost our greatest instigator, but we cannot escape his influence, and his immortal advice for all artists, weirdos, and queers to hang on to ourselves.