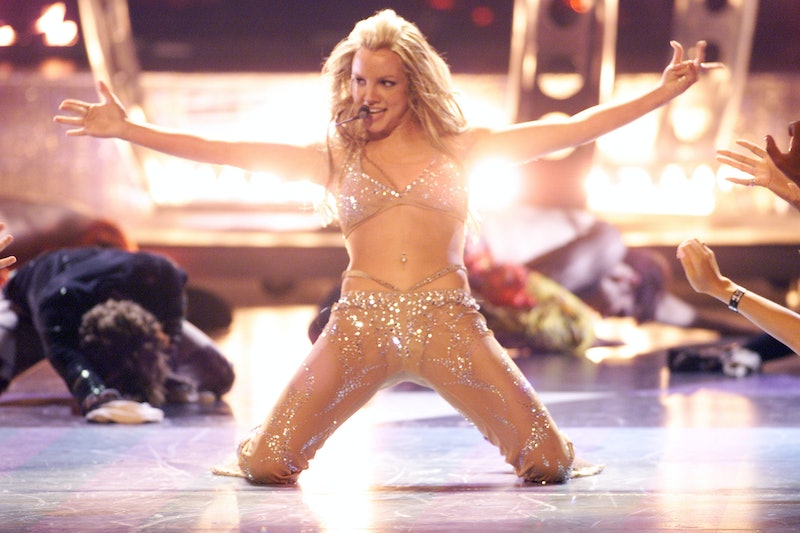 Nothing defined my adolescence quite like Britney Spears in a crop top. Baring your midriff was fifty shades of scandalous back then, so she was like, a total rebel. And everybody wanted to be her. She always wore super cute colors, somehow appealed to both the girlie and the more sporty at the same time, and had insane abs. Plus, we need to mention that dangling diamond belly button ring. I mean, who didn't want one? It's hard to narrow it down, because I feel like she spent the majority of the '90s and early '00s showing off her stomach, but we'll revisit a few of the best time Britney Spears was crop top goals. Get ready to get seriously nostalgic.

Taylor Swift might be the reigning queen of crop tops, but she's definitely not the first pop star to become synonymous with a bare midriff. Britney Spears hit us with the crop top right off the bat, in her debut music video for Baby One More Time, and there was a long resume of crop top greatness to follow it. From her music videos, to award shows, to photo shoots, to even just her street style — no one can deny Spears can rock a crop like no other.

Check out these 11 times Britney Spears was crop top goals, and remember all the times you got in trouble at school for trying to look just like her. The struggle was real.

This moment is forever engrained in my memory. It's Britney Spears, a super risque crop (by the '90s standards), plus *NSYNC. I would gladly take detention to recreate this moment at school.

With sweatpants and the bubble gum pink matching knee pads, no less. This was before skinny jeans was a thing, guys.

She was also serious hair goals in this music video, too.

You can totally forgive the metallic pants because how stinking adorable is she?

She's graduated from the girl next door to "not that innocent," and if there was ever a mic drop moment in VMA history — this was it.

She always brought a bit of funk and edge to her ensembles, which kept them way more fresh and fun. Also, let it be said that there were several attempts on my part to copy that hairstyle. None succeeded.

Who else got crystal stickies to put around their belly buttons?

You probably totally got grounded for trying to steal this look.

The VMAs have yet to top this moment, and I doubt anyone ever will. But really, I don't know if we were more surprised by the tiniest crop top ever, or the giant snake?

RIP Pinky and Stinky. But also, this crop top is like a legit work of art.

Total rock star. And I definitely may have worn a tube sock on my arm after this one. #noshame