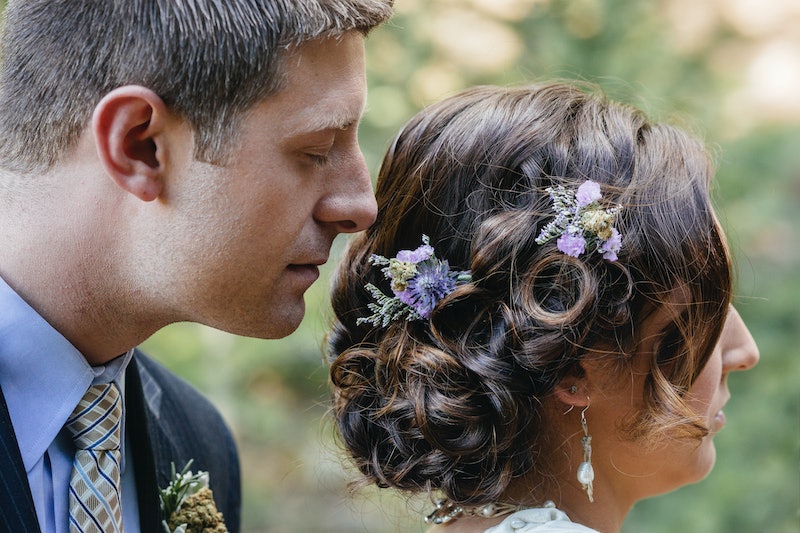 Bec Koop, a 30-year-old florist living in Denver, Colorado, has been smoking weed for years. She has endometriosis and severe back pain, and has come to rely on marijuana for pain relief and relaxation. She never thought about combining her love for Mary Jane with her passion for other flowers — until one day, she had an epiphany.

"I had some cannabis coming down out of my own garden and I decided to put the flowers around the cannabis, Koop tells Bustle. "And it was a lightbulb moment. It was like, 'Aha! Oh my god, cannabis weddings !'"

And just like that, in a state where recreational cannabis consumption is legal, a new woman-owned business was born. Buds & Blossoms became Colorado's first cannabis florist, and Koop began selling tasteful arrangements incorporating marijuana flowers into everything from bouquets to boutonnières.

Koop asks that customers buy the weed at a dispensary themselves, which makes things simpler, legally speaking. "If you grew your own tulips and you said you wanted these tulips in your bouquet — and they're legal tulips —what’s the problem here?" None — in Colorado, anyway, where recreational marijuana use has been legal since 2012.

As her arrangements caught on, Koop realized there was a demand for more than just flowers, and decided to start Cannabis Concierge Events, a wedding planning company that helps customers incorporate cannabis into their special day, legally. Customers can plan anything with her, from designing hemp wedding dresses to planning cannabis oil massages and THC-filled vaporizer bars.

The niche industry for cannabis weddings is new but booming, so much so that Koop decided to co-organize the first ever cannabis wedding expo on January 17. Sponsored by the 420-friendly dating site Love and Marij, Koop says they are "fully expecting to sell out." Attendees will be able to do everything from taste test THC-free samples of edibles to browse custom-made vaporizers for the big day.

Having worked in the traditional wedding industry for years, Koop says that working with "cannabis brides," as she calls them, is a welcome relief. "I have seen bridezillas. I have had four circumstances where I've walked in and I’ve seen the bride screaming at her mom, her sister, her whole bridal party ... but I have never had that circumstance, knock on wood, with a cannabis bride."

"I’ll probably have a little before the ceremony to take the edge off," Gibbs says. "To help myself stay calm and relax so that I can focus on the most important element of it. Which is the man in front of me."

Lauren Gibbs, a 35-year-old, pink-haired social media strategist for the female cannabis entrepreneur organization Women Grow and Willie Nelson's cannabis company Willie's Reserve, is currently planning a cannabis wedding of her own, for this July.

"I hear it’s kind of a stressful day. I would love to be a little high," Gibbs tells Bustle. "Just like some women would like to have a glass of champagne while they’re having their hair done — well, champagne is just not for me — but I would like something to put me at ease for that day."

Gibbs isn't planning to incorporate cannabis into her actual ceremony in any way, but she expects she will have a buzz while she's exchanging her vows. "I definitely want to be completely coherent, and when I’m looking into the eyes of my future husband and making our vows to spend our life together, I know that I’ll be nervous. So I’ll probably have a little before the ceremony to take the edge off," Gibbs says. "To help myself stay calm and relax so that I can focus on the most important element of it. Which is the man in front of me."

After the ceremony, Gibbs will have alcohol available for those who want it, but she'll also have a vaporizer "bud bar" at her reception, with strains she picked out personally. One will be a high CBD strain that's low in THC, meaning for newbies, the effect will be more of a body high than anything psychoactive. She's chosen not to have edibles ("risky for novices") and her party will be adults-only. She's hoping that the overall effect will just be a chill, happy party.

"It is so much more fun to be around people who are mildly stoned than to be around drunk people," Gibbs says. "As I’ve become more of a regular cannabis user, I’ve actually stopped drinking."

That's a common reason her customers want to incorporate cannabis into their weddings, Koop says. She's also had customers who are recovering alcoholics and don't want any alcohol at their wedding, but who are still able to enjoy marijuana.

Colorado is already a popular wedding spot, what with the majestic mountains and all, but Koop says the legalization of recreational use has only made the state more of a nuptial destination.

"There are so many people traveling to Colorado right now for cannabis tourism, because it’s like Amsterdam," Koop says. She estimates that 85 percent of her wedding clients are from out of state or out of the country. "I had some clients who flew in all the way from Austria," Koop says. That couple didn't want cannabis in their actual ceremony, since they knew family back home would be uncomfortable seeing the photos. So instead, they had Cannabis Concierge book a tasting tour of local dispensaries and a cannabis oil massage the day of their wedding, before they got married — so that when it was time for the ceremony, they were, presumably, very relaxed.

Some clients have replaced the tradition of lighting a unity candle with lighting a bowl together. "You literally get your first hit together as a wedding couple."

Then there are serious cannabis connoisseurs, many of whom Koop says work within the cannabis industry, and who feel so strongly about Mary Jane that they want to incorporate her into the wedding ceremony itself.

"There are so many traditions on the traditional side of the weddings. But there are also so many people who have a daily ritual when it comes to where they smoke, how they smoke, when they smoke, what bowl they smoke out of," Koop says. "You know, that’s ritual and tradition. So why shouldn’t people be able to do what they do in their daily lives on their big day?" For example, she's had some clients who've replaced the tradition of lighting a unity candle with lighting a bowl together. "You literally get your first hit together as a wedding couple."

For those who do want to incorporate edibles into their wedding reception, however, Koop is strict. Instead of a drink ticket, guests get what Koop likes to call a "tokin' token." Guests only get two tokin tokens, which gets them two small-dosed edibles, dispensed by her employees with advice and caution.

She also strongly prefers her customers have adult-only parties. "I don’t want the situation of Uncle Sam passing the joint to little Johnny." Which is why, no matter what, she has her employees check ID, even if it's a 21+ party. But their job isn't just to card people — it's also to inform guests about the available strains, and to try to ensure their choices and dosage are tailored and reasonable. Should things go wrong anyway, it's also up to them to do some psychological damage control.

"You definitely have people that take on the mindset, 'When in Rome,'" Koop says. "They should be able to try it when they’re being educated, moderated, safe, and if they start to feel uncomfortable, someone that they can at least talk to about how they’re feeling who can put them at ease. You know, do they need some coffee or do they need some green tea to mellow out?"

Both Koop and Gibbs like to emphasize that despite the risk that Aunt Margie will end up having a bad trip, the likelihood of things going badly is still smaller than it is at a party where the shots are flowing.

"We’ve all been at a wedding where the drunk person is screaming and hollering and making a fool out of himself and all the others around him because he’s wasted," Koop says. "Well, under the circumstances where someone might smoke too much they might just go in a corner and go to sleep." Cannabis Concierge has thought about preventing that, too: earlier in the night, they suggest offering sativa edibles (the more energizing strain of marijuana), whereas later in the night, they might offer a relaxing indica blend as a nightcap, to help wind things down.

One has to wonder if relatives ever get scandalized by the fact that there's weed at the party in the first place. "I’ve never had anyone make a fuss. But I have had people kind of whisper as you walk by or look down their nose at you and it’s obvious that you’re being judged," Koop says. "So you set up a separate space outside where people can go off and smoke. If Aunt Margie doesn’t want to be a part of it, she doesn’t have to be."

As someone who works as a cannabis social media strategist, Gibbs adds that exposure is one of the best ways to open minds. "For a lot of my guests, this will be their first experience having someone standing in front of them who can explain what the different effects of the different strains are ... I am somewhat delighted to be able to expose my friends and family to the fact that the sky is not going to fall if you serve cannabis openly next to a beer bar." She isn't worried about incurring their judgement; when she made the announcement on Facebook that she'd be having a wedding with cannabis in it, her family and friends were supportive.

On her end, Koop has experienced more pushback to the concept of cannabis weddings, though mostly by the vendors at traditional wedding expos themselves — part of the reason she decided to hold a wedding expo of her own.

"When I tell traditional vendors at expos about my business, I’ve gotten everything from high-fives to hugs to, 'Get the f*ck out of my booth.' And I thought that woman wanted to slap me. And when she said that to me I looked at her and I smiled and I said, 'I’m sorry ma’am if I offended you, but please understand that you live in Colorado. It might have been your friend, your neighbor, and your husband that voted this in. Times are changing, and I hope someday you accept that.' And I walked away with a smile on my face."

More like this
You Can Stay At The 'Hocus Pocus' House On Airbnb
By Alexis Morillo
Craving The Beach? Here's Your Guide To A Solo Vacation In Turks & Caicos
By Alexis Morillo
10 Ways To Be More Empathetic To Your Partner
By Raven Ishak and Lexi Inks
Think Your Partner Is Cheating? These Tarot Cards May Confirm Your Suspicions
By Kristine Fellizar
Get Even More From Bustle — Sign Up For The Newsletter