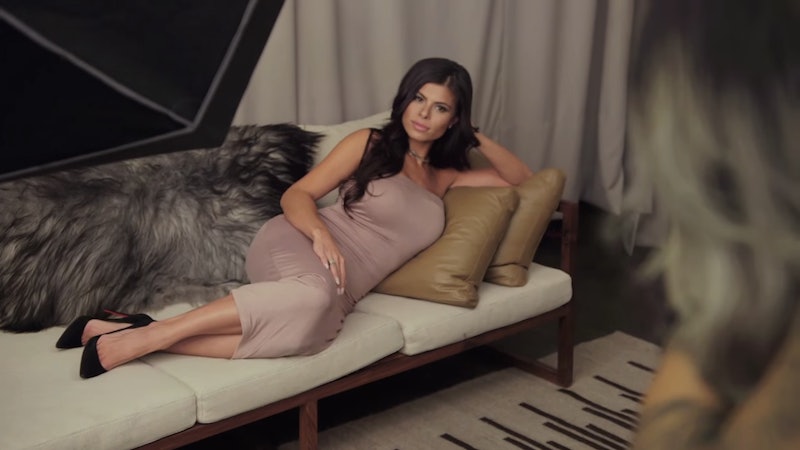 If there's one person you're sure to remember from the trailer for Season 6 of Mob Wives: The Last Stand , it's Marissa Fiore. She may be a new addition to the cast this season, but she acts like she's used to all of the drama that Mob Wives brings. From what I've seen of Marissa so far, she seems tough, fierce, and combative that I wish this wasn't the one and only season of Mob Wives we'll be able to see her in.

Alas, since VH1 decided to cancel Mob Wives back in December, this season with Marissa is all we've got. Well, if the Season 6 trailer is any indication, Marissa is definitely going to make her brief time on the show count, and for that, I thank her. Besides, there's always the possibility that the feuds among the Mob Wives' cast members will continue through social media and the like for our entertainment long after the final season ends. Fingers crossed!

So what is it about Marissa that is sure to make her a scene stealer this season of Mob Wives? Take a look at what Marissa brings to the table below, and it should speak for itself.

Her Boyfriend Is Well-Acquainted With Many Of The Mob Wives

According to her VH1 bio, Marissa and her boyfriend, OZ, have been dating for a few years and have known each other for much longer, but he goes way back with some of her Mob Wives castmates. In particular, he grew up around Renee Graziano, Drita D'Avanzo, and their families. According to VH1, OZ was recently released from a five-year prison sentence, and Marissa is proud of how he handled it all. "OZ took his bid like a man," she said in her bio. "He kept his mouth shut and stayed loyal - that's what I love about him."

Marissa has a 7-year-old son named Jaiden from a previous relationship, but doesn't have any help in raising him from his father, according to her bio. However, she seems more than capable of taking care of her family on her own.

After being set in Philadelphia and Chicago, Mob Wives returns to Staten Island, N.Y. this season, which is good news for Marissa, who is a native Staten Islander. We all know that having a home court advantage can definitely come in handy on this show.

Marissa, whose professional name is Marissa Jade, works as a model for a living, which is quite clear from her Instagram profile packed with pics of the Mob Wives newbie. Her biggest claim to fame so far is that she has served as the inspiration for the look of the main protagonist in the comic book Destiny, Queen of Thieves, according to her VH1 bio. She also has a Playboy spread in the works, so we should be seeing a lot more of Marissa in the future.

You may have seen Marissa before and not even have realized it. She has appeared on TV shows like Gossip Girl, The Good Wife, and Law & Order, as well as movies like Elf, according to her November interview with SILive. Destiny, Queen of Thieves has also been rumored in the past to have some interest from studios to make the comic into a live-action movie. Perhaps Marissa will take on the big screen after her small-screen stint in Mob Wives.

She's Going To Cause A Stir

In the Season 6 trailer for Mob Wives, we see Marissa not only talk about beating someone up, but it also looks like she gets into a physical altercation with a blond woman, who kind of looks like her fellow newbie Brittany Fogarty. Things have also been rumored to get physical between Marissa and Brittany because of something Marissa says to her, as reported by the NY Daily News.

Didn't I tell you there's never going to be a dull moment on Mob Wives with Marissa around?