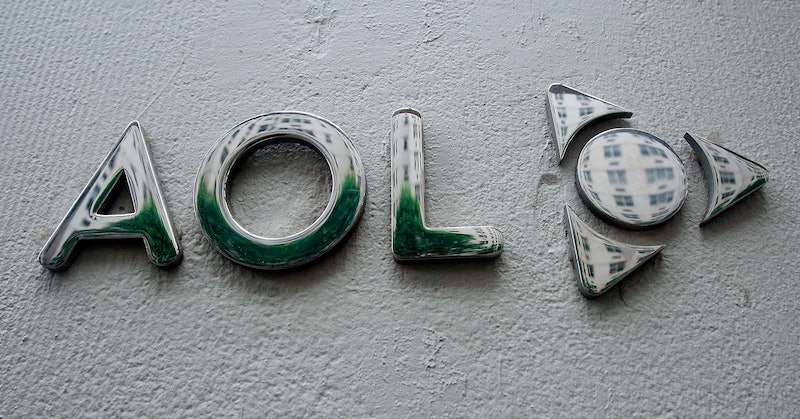 Andrew Romano at the Daily Beast has written an article guaranteed to tickle the hearts of roughly every 25 to 35 year old on the Internet. The ever-so-compelling topic: Why we're still secretly using our AOL screen names all over the world wide web. If dial-up connections and AOL — ahem, America Online, as it was formerly known — predate you, please go read Romano's article as a form of anthropological study (yes, families had designated "computer rooms"). And for those of you who can relate? Treat yourself to a #TBT walk down memory lane.

Romano's premise is that A) a lot of people still use their old AOL screen names as usernames for banking, commenting on Gawker articles, etc. and B) this means something. Although, "network-security god" Bill Cheswick thinks the phenomenon is merely practical. "Changing screen names and passwords is a big hassle," Checkwick told Romano. "If you have twenty accounts, you don't have a list of them: they come up over time. ‘Did I change this one already? ‘Does it have a new password or the old one?’”

But AOL chief architect Joe Schober has a more interesting answer: We can't let go of our old AOL screen names because they were our first stabs at online identities, and humans are a nostalgic bunch. Romano offers a theory of his own: Our AOL names remind us of a simpler digital time —"a time when your real life and your Internet life weren't quite the same thing yet. When you didn't have to secure firstnamelastname.com, or else. When you weren't expected to establish your own 'personal brand.' When being a pimply Britpop fanatic was enough."

Though I find the convenience explanation most likely, I like Romano's explanation best. The thing that makes old screen names hilarious is they offer a glimpse into how we defined ourselves at their creation, and it's often absurd. Looking back, it's almost unbelievable. I thought the most salient part of my identity was my love for soccer? Or Cinnabon? Or some boy I'd been "going out with" for a month? Behold: Here's how Bustle writers, editors, and friends saw themselves in the early days of America going online.

"My first screen name was abroller1. Named after an informercial for the ab roller that I thought was funny when I was 13. And, yes, abroller was taken." — Kate Ward, Managing Editor

"Mine was kiddo2001 (it was super futuristic at the time)." — Rachel Krantz, News Editor

"Mine was boring initials-and-birthdate combo JAA915, created by my mom, probably so she could save me from choosing FlirtyGirlLuvsPhish83 for myself." — Julie Alvin, Lifestyle Editor

"Mine was glittergurl080. Not even kidding." — Alexandra Finkel, Recruiting & Operations Manager

"Mine will top them all. Beachbabe7934 — 7934 was the last four digits of my middle school boyfriend's phone number. HA!" — Anna Klassen, Associate Editor

"MargaretWJ, chosen by my dad, who was in charge of the AOL account. I think he must have read about cyber predators in the Wall Street Journal and didn't want me engaging in any loosey goosey self-expression on the World Wide Web." — Margaret Wheeler Johnson, Deputy Editor

"I made the inexplicable decision to change my name from Jenny to Jenni at age 12, so my AOL screen name was something like jenni_the_star2001. I'm wincing." — Jenny Hollander, Associate News Editor

"Mine was IiIror0. So, thats three i's and a zero, because just writing lilroro would have been so uncool." — Rosanne Salvatore, Front Page Manager

"Mine was purplestar27, then hayleystar27, then luv2act90, which I kept for a longggg time. I'm responding to this at 6:50 a.m. my time from Hawaii because it's just that important." — Hayley Saltzman, Social Media Editor

"Mine was KiKiVoo7. Kiki was the name of my fav character on the short-lived PBS show The Puzzle Place, seven was my lucky #, no idea why I added Voo." — Kara Freewind, Contributor

"Mine was girliegottadance because I had to replace my old NSync one (nsyncadelic), was on the dance team, and refused to use a screenname with weird underscores or numbers and this was the only permutation I could fathom at age 15. I did not realize it sounded kind of stripper-like. I've since been informed that it is." — Kelsea Stahler, Writer

"LOL I believe it was sweetie2087. Because I was young and stupid." — Adrienne Vogt, Writer

And, for the record, my AOL screen name was EMBJayd, because those were my initials (before I adopted my grandpa's name, Nolan, as my middle-name for writing purposes) and I really liked the name Jade. Which I thought was cooler spelled "Jayd." Obviously. And to share a few favorites from my Facebook friends:

hooloovoo. I had a lot of hitchhiker's guide related screen names. Hooloovoo, which I think was only mentioned once in the book, was a "super intelligent shade of the color blue"

showmeyourenuts77. Sometimes it only takes one extra letter to make something brilliant.