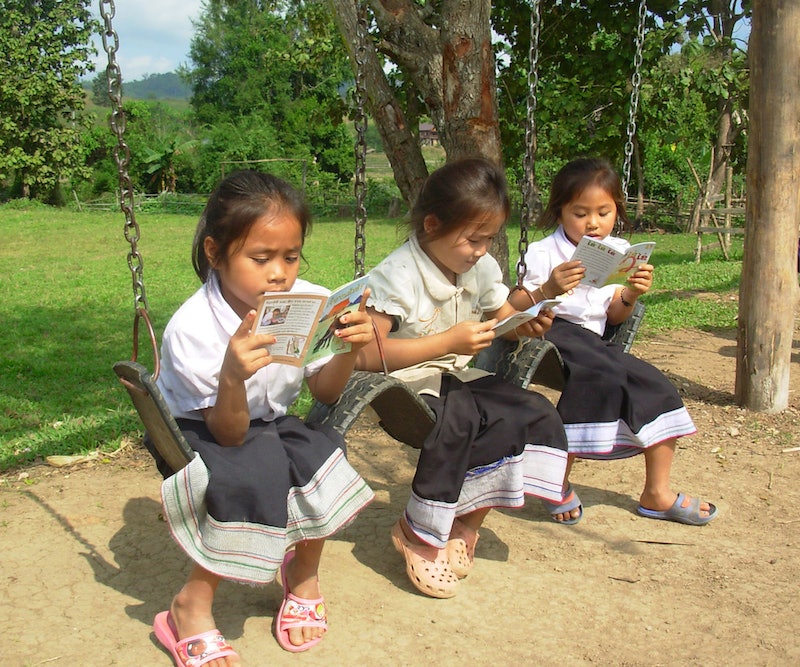 I mean, for me, I always say that A Tree Grows in Brooklyn had the biggest impact on me growing up as a bookish little girl in New York City. But then, because I am a human being of this generation, the Harry Potter books also had a huge impact on my childhood. Neil Gaiman's Sandman shaped a lot of my early high school nightmares. And The Phantom of the Opera was my first big fictional crush (which probably explains a lot about my personal life since then).

But luckily, I didn't have to choose a book this time: you did. I asked a whole bunch of lovely, literary ladies for the one book that had the biggest impact on their life, and I got back so many wonderfully well-thought-out responses. The books range from fiction to nonfiction, and from Jane Austen to Lemony Snicket, but all of them are definitely worth a read.

A huge thank you to everyone who contributed, you have some great taste in books!

1. The Awakening by Kate Chopin

My book would probably be The Awakening. It was my first real solid grasp on the implications of male privilege and as a woman who grew up Catholic I really understood the sexual repression bit…

2. Girls to the Rescue by Bruce Lansky

These folk tales where girls are the heroes were a staple on my childhood bookshelf. I'm grateful for the agency, attitude, and adventurousness that they taught me.

Beloved is a staple read for anyone hoping to understand the intersectional trauma that black women face — and often overcome. Besides that, at one point or another, I think the following quote has been relevant to every woman out there: "Freeing yourself was one thing, claiming ownership of that freed self was another."

This book gave me a sense of belonging to my sister earthlings throughout time and place.

5. A Study in Scarlet by Sir Arthur Conan Doyle

I read A Study in Scarlet when I was 9 years old. It encouraged me to keep learning and striving to be better. Mysteries are still my favorite genre.

I loved reading these books, and I believe the author(s) helped visualize historical events and settings through the sharing of stories created by fictional characters from different time periods. It was interesting to read that even though each American Girl grew up in a different era, they all had similar likes and dislikes or girl drama. These series were a way to connect girls of all types, regardless of their cultural, or racial background.

7. To Kill a Mockingbird by Harper Lee

The first book that I can remember making a big impact on my life was To Kill a Mockingbird. I read this in high school and it was then that I really began to appreciate reading — which is why I love the book so much. My favorite parts involved the life lessons and amazing quotes that I still think about and reference in my life today. Here are some of my favorites: "I wanted you to see what real courage is, instead of getting the idea that courage is a man with a gun in his hand. It's when you know you're licked before you begin, but you begin anyway and see it through no matter what." and "It’s never an insult to be called what somebody thinks is a bad name. It just shows you how poor that person is, it doesn’t hurt you."

8. A Series of Unfortunate Events by Lemony Snicket

A Series of Unfortunate Events is the funniest story I've ever read, while also being a deeply tragicand complicated bildungsroman about the nature of good and evil. I read the entire series when I was younger, and then again recently, and even as an adult the story reconfirmed the importance of not taking what adults say as gospel. All the adults in the Baudelaire's lives, good or bad, forgo the greater good in favor of serving the system, which gives Lemony Snicket the opportunity to make biting commentary on everything from education to the upper class.

I started reading this series when a teacher gave me the first book. I was totally hooked, and the series made me feel like it was OK, and even fun, to be a little strange.

9. Pride and Prejudice by Jane Austen

Pride and Prejudice has meant a lot to me, because I first read it when I was in second grade and didn't really understand the emotional content of it, but when I reread it as I grew older I started to suddenly ~feel~ the emotions of the characters, so it’s like the book was my partner through emotional maturity.

10. A Wrinkle in Time by Madeleine L'Engle

This book stands out as not only a great encourager of whimsy, but as a challenge to look critically at that which seems obvious or given. From the idea that a straight line is not, in fact, the shortest distance between two points, to the encounter with aliens whose very senses are different from ours, this novel forced me as a child to open my mind to new ways of looking my surroundings. And of course, it never hurts that at its core, this is a book that espouses the importance of love, even in the furthest, strangest, or unlikeliest of places.

11. Chasing the Scream by Johann Hari

If I have to choose only one, I think it has to be Chasing the Scream by Johann Hari. There are so many messed up systems and institutionalized injustices in the world, but the war on drugs (and drug addicts) is one that's just taken for granted. Hari exposes it all for what it is and proposes a few viable alternatives. Not only has it changed my perspective on a whole population of people, but it's made me want to go into drug addiction advocacy and see if I can make a difference in that part of the health care system.

I read A Little Princess when I was 10 years old and it helped me come to terms and cope with my father's death. It developed, in me, the importance of empathy for others and the ability to recognize how much I had been blessed with. Finally, it urged me to comprehend that life can be positive, even in the darkest of circumstances.

So I feel that Jane Austen is always a hokey choice, because a good portion of people secretly want to be Lizzy Bennet. (Not that I blame them. I want to be Lizzy Bennet, but I'm too averse to conflict and I'm more on the Darcy awkward and mildly rude scale of things.) Persuasion is a book that really stuck with me when I read it because I loved the character of Anne Elliot. Here you have this woman, past her bloom, with a terrible family that's low on charm and high on neurosis, who's kind of just there being mildly sad but level-headed and chill enough to deal with whatever. At 18, stressed out and really sad, just Anne living her life, resigned, with the small glimmer of being able to resolve a past moment struck me. It's a book that I always end up rereading every two years as a litmus test for how I feel about the world and myself.