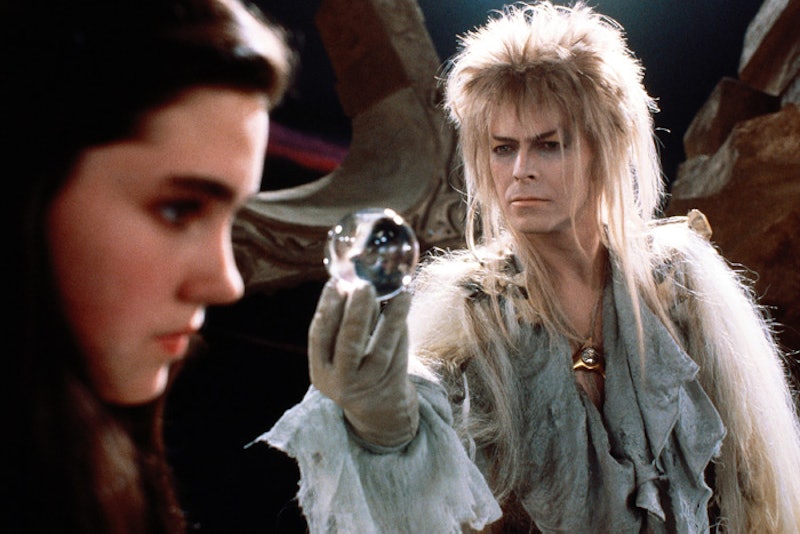 Compiling a list of David Bowie's androgynous looks was never going to be straightforward, because nothing about Bowie ever was. The man took a concept and ran with it, creating unique visions and presenting them to us not just through his music or performances, but through his aesthetic choices.

After all, who else could pull off casually donning an eye patch? Who else changed the face of music so drastically that the effects of the '70s ripple through the industry today? Who else could, with just one music video, change the way a queer, weird teen in the Welsh countryside saw herself forever? And have that be true for millions of teens not just across the world, but through such an expanse of time, too.

I believe that style is one of the best ways to represent oneself because it's an ongoing, constantly evolving, almost daily presentation to the world. Through our clothes and how we wear them — through our faces and how we adorn them — we can reflect ourselves and present anything we care about to the rest of the world.

Nobody played with this concept in the same way Bowie did, and I doubt anybody will ever be able to recreate his originality in the same way, either. Next time you think an outfit you love may be "too much" or "too queer" or "too androgynous," just imagine David Bowie cheering you on while wearing one of his most iconic, gender-bending looks.

This was my first introduction to Bowie — one of my first crushes and, of course, the inspiration for my scene kid self's hairstyles. Although Michael Jackson and Sting were considered for the role of Jareth in Labyrinth, the film just wouldn't have been the same without David Bowie's "Magic Dance" number and his crotch. Duh.

Out of all of Bowie's makeup looks, I think this — along with the Aladdin Sane lightening bolt, of course — is probably the most famous. It's definitely one of my favorites, purely because of all that gorgeous gold. David Bowie undoubtedly helped pioneer makeup for men.

This is undoubtedly one of Bowie's most iconic beauty looks. I even copied it for my own 18th birthday party.

The start of Bowie's androgyny arguably came with long hair and "girlish" dresses. He was so into it that his first television appearance at age 17 was as the founder of "The Society Of The Prevention Of Cruelty To Long-Haired Men."

Seriously, everything about this look is as iconically androgynous as it gets. When my friends and I went for commiseration drinks on the day of Bowie's death, I wore as much blue eyeshadow as I could fit on my face. And I'm seriously considering investing in a pale blue suit.

Although it's a bit of a generalization, when I think of '90s Bowie, what immediately springs to mind is that spiky orange hair — a throwback to his orange "Ziggy Stardust" locks, but with the enthusiasm of hair gel from the '90s. He was also repping florals, though. Like, all over his body.

Although rumor has it that Bowie had heterochromia (different colored eyes), the truth is that his mismatched eyes were the same color naturally. One pupil was just damaged. It was the outcome of a schoolyard fight that could've gone a lot worse, but thankfully only ended in an alien-looking eye and poor depth perception. What I love is that Bowie so often dressed up those eyes with shadow and glitter — unafraid of adding to his uniqueness further.

Bowie's print cloaks and kimonos were much more that just a fashion statement, but a genuine interest in Japanese culture. Of course, they worked beautifully for the Ziggy Stardust tour, helping him look exactly "like a cat from Japan." And a beautifully delicate one at that.

Bowie in drag as his own backing vocalists is everything, especially when he rips off that wig at the end. Damn, son.

I don't think anybody has ever looked good with a femme, red mullet, except for David Bowie.

Bowie sported this ensemble specifically for his Aladdin Sane tour and its ridiculousness only enhances the beauty of the garment. I think it truly summarizes David Bowie's aesthetic for this period.

Bowie's wide variety of jumpsuits, catsuits, and playsuits are iconic in their own right. But when I think of what make his jumpsuits so, well, him, it's definitely the asymmetrical styles he rocked so perfectly.

This video is trippy as hell and Bowie's commitment to being a made-up pastel clown (or a mime?) is just another example of the icon committing to a look, a concept, and a binary-breaking character in a way that nobody else would, or even could.

What I think is so magical about David Bowie — something arguably proven by his death — is that almost everyone in the world has their own personal connection to him. Be it a story from childhood, a link to our parents, or through a beloved anecdote from an interview, Bowie reached out to us all in a way that's so passionately intimate, it's undeniable. For me, these looks and his experimentation with appearance and gender are a huge reason that I adored the man. Through them, his legacy lives on.

More like this
'Love Island's Will Got A Farm Animal Manicure & It's *Adorable*
By Sam Ramsden
Camila Cabello Wore A Pearl Bra On The 2023 Grammys Red Carpet
By Alyssa Lapid
Lizzo Wore A Spicy Bustier Gown On The 2023 Grammys Red Carpet
By Alyssa Lapid
Taylor Swift’s Glitzy Grammys Look Is Giving Midnights
By Alyssa Lapid
Get Even More From Bustle — Sign Up For The Newsletter
From hair trends to relationship advice, our daily newsletter has everything you need to sound like a person who’s on TikTok, even if you aren’t.