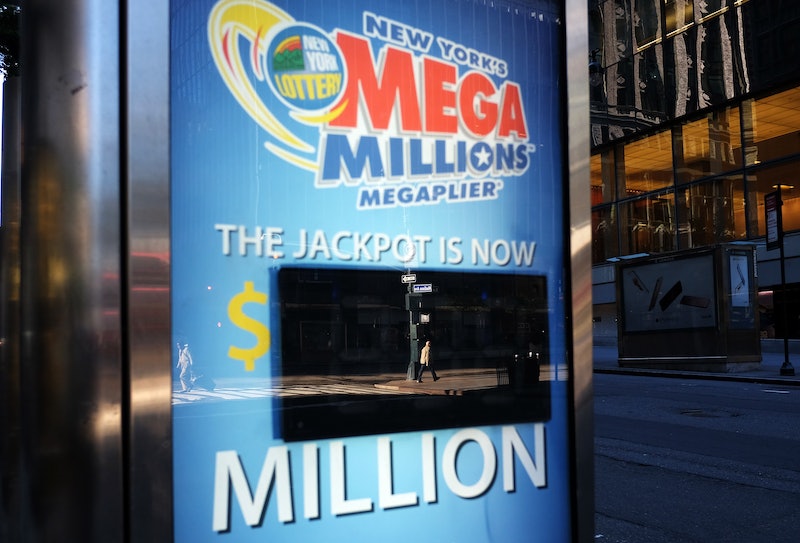 By Wednesday, millions of Americans will have purchased tickets for the Powerball in hopes of winning the $1.5 billion jackpot — the largest prize in lottery history. While it goes without saying that a billion dollars could change your life in unthinkable ways, what most people don't know is that sometimes it's for the worse. It might not stop you from trying your luck in Wednesday's drawing, but you might want to consider whether the lottery curse might be real." Judging by the cases of several lottery winners and how their lives changed after snagging the jackpot, there might be something to it.

As the Biggie song goes, mo' money, mo' problems. That's the common theme that threads through every sobering (and sometimes downright tragic) post-lottery story. Whether it's irresponsible spending leading to bankruptcy (which is, surprisingly, one of the better outcomes), friend and family relationships strained by greed, or the threat of physical violence or death (the worst outcome), one thing each of these people has in common is that they all wish they'd never won.

Of course, not everyone who wins the lottery falls victim to such misfortune. In fact, many winners have been able to live happy, cushy lives. But there are many bad outcomes that you should learn about before playing on Wednesday. Here are eight people whose lives were completely ruined by winning the jackpot.

It's despicable what money can make people do, even to their own family. After he won $20 million in the Illinois lottery in 1996, Jeffrey Dampier used his new wealth to give his family a better life. However, his sister-in-law, Victoria, had more sinister intentions. In 2005, she and with her boyfriend Nathaniel kidnapped Dampier and shot him in the back of the head with a pistol. The two were convicted of his murder, and are now serving life sentences.

Post's life became a living hell as soon as he won $16.2 million in the Pennsylvania lottery in 1988. His girlfriend sued him, claiming he had agreed to give her half of the winnings. She was awarded $5.2 million in 1992, while his legal fees piled up. Then, Post's brother was convicted of hiring someone to kill him and his wife and make it look like a murder-suicide. As if that weren't bad enough, Post was himself convicted and sentenced to prison for firing a gun at a debt collector.

In 1997, Harrell won $31 million in the Texas lottery. As with many other winners, many of Harrell's friends, relatives, and acquaintances started coming out of the woodwork to ask for financial help. As a Pentecostal preacher, Harrell generously lent them money, but never saw it again. Soon his wealth ran out, prompting his wife to file for separation. Sadly, the stress reportedly led Harrell to commit suicide. All of this happened within 20 months of winning the jackpot.

Talk about tragic last words. Abraham Shakespeare told his mother that he wished he had never won the lottery just a few weeks before he was killed. After winning $30 million in 2006, Shakespeare was incessantly bombarded by friends and family who wanted a cut. Then he met Dorice (Dee Dee) Moore, who reportedly told Shakespeare that she would help protect him and convinced him to transfer his money to her account. In 2009, Shakespeare disappeared, and three years later, Moore was sentenced to life in prison for his death.

Janite Lee is proof that not even charitable intentions can keep you from the curse. An immigrant from South Korea, Lee won in 1993, choosing to receive $620,000 a year over a number of years. After moving her family into a posh gated community, Lee started giving her earnings to philanthropic organizations and the Democratic party (she even got to dine with Bill Clinton and Al Gore). But after she sold the rights to her annual lottery payment plan, Lee was forced to file for bankruptcy with just $700 to her name and more than $2.5 million in debt.

Sometimes, lottery winners don't even get to enjoy their winnings. In 2012, Chicago family man Urooj Khan won $1 million, and the next day he was dead. After an autopsy was conducted, it was revealed that Khan had died of cyanide poisoning. Though his sister-in-law and her father were reportedly suspected of being involved in his death, they were never charged.

David Lee Edwards is a classic example of someone who ends up broker than they began through reckless spending. After winning $27 million in 2001, the former drug addict and felon purchased a $1.6 million mansion, three race horses, a Lear Jet, a Lamborghini, a fiber optics company, and a limo business. Besides blowing through his money, Edwards and his wife also allegedly started using drugs again, and were arrested multiple times for possession of crack cocaine, heroin, and pills. Just a few years after winning it big, Edwards was broke and living in a storage unit that reportedly contained human feces. He died in 2013, at the age of 58.

When he won the $315 million Powerball jackpot in 2002, Jack Whittaker set a new record for winning the largest amount from a single ticket. But soon, his life became defined by endless trouble and tragedy. Whittaker's car was broken into twice, with the thieves making off with hundreds of thousands of dollars each time. His company started getting hit with lawsuits, which had never happened before his win, and he was also sued by Caesars Atlantic City casino for reportedly bouncing $1.5 million in checks and a woman who alleged that he had groped her at a racetrack.

But that wasn't the worst of it. Whittaker's granddaughter Brandi spent her portion of the winnings on drugs, and died of an overdose a few months after her boyfriend suffered the same fate. Whittaker's daughter (Brandi's mother) also died later of mysterious causes. In 2007, Whittaker told ABC News, "I wish I'd torn that ticket up."

More like this
A New Netflix Doc Will Explore The Unsolved Murder Of Jill Dando
By Sam Ramsden
This First Look At 'The Gold' Shows Jack Lowden In A Whole New Light
By El Hunt and Sam Ramsden
6 Anti-Police Brutality Organizations You Can Support Right Now
By Syeda Khaula Saad and JR Thorpe
Twitter Has *A Lot* To Say About The "Single Penalty”
By Sam Ramsden
Get Even More From Bustle — Sign Up For The Newsletter
From hair trends to relationship advice, our daily newsletter has everything you need to sound like a person who’s on TikTok, even if you aren’t.